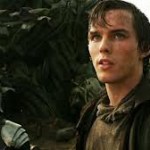 I saw JACK in IMAX 3D and it was lots of fun. But if you are waiting to hear “Fee-fi-fo-fum, I smell the blood of an Englishman“, or see, as I was, the goose that lays the golden eggs or even the cow that got traded for the magical beans for that matter, director Brian Singer has cleverly re-worked the Jack and the Beanstalk origin tale.

Let’s face it, in the original fairy tale Jack is a thief and a killer. He is living with his widowed mother and their only means of income is a cow. When this cow stops giving milk, Jack is sent to the market to sell it. On the way to the market he meets an old man 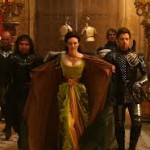 who offers to give him “magic” beans in exchange for the cow.

Jack takes the beans but when he arrives home without money, his mother becomes furious and throws the beans out the window. As Jack sleeps, the beans grow into a gigantic beanstalk. Jack climbs the beanstalk and arrives in a land high up in the sky where he follows a road to a house, which is the home of a giant. He enters the house and asks the giant’s wife for food. She gives him food, but the giant returns and senses that a human is nearby:

I smell the blood of an Englishman,

Be he alive, or be he dead,

I’ll have his bones to grind my bread. 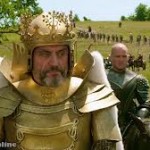 However, Jack is hidden by the giant’s wife and steals a bag of gold coins as he makes his escape down the beanstalk. Jack repeats his journey up the beanstalk two more times, each time helped by the wife of the giant and narrowly escapes with one of the giant’s treasures. The second time, he steals a hen that laid golden eggs and the third time a magical harp that played by itself. This time, the giant follows him down the beanstalk to get his property back. Jack calls his mother for an axe and chops the beanstalk down, killing the giant. The end of the story has Jack and his mother living happily ever after with their new riches.

The story portrays a “hero” unscrupulously hiding in a man’s house, playing on his wife’s sympathies in order to rob and finally murder the owner of the house who was minding his own business.

So, how did Singer and co-screenwriters Darren Lemke, Christopher McQuarrie, and Dan Studney make this tale more PC? They did an incredibly tactful re-dressing of Jack – they dumped the coins and the hen that laid the golden eggs! Well, Jack does steal an egg – but maybe he was only borrowing it and intended to bring it back after show-and-tell at the village tavern in the Singer-McQuarrie et al version. 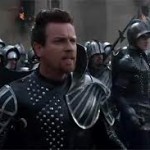 Jack (Nicholas Hoult) is an orphan farmer living with his uncle. When he goes to sell his uncle’s horse (the horse is vital later – cow don’t run) and carriage, a desperate monk who has stolen powerful beans from the King’s unscrupulous advisor Lord Roderick (Stanley Tucci), pleads with Jack to take the beans to a monastery for safe keeping. He tells Jack not to let the beans get wet. 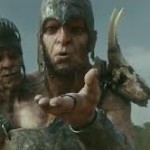 King Brahmwell’s (Ian McShane) daughter Isabelle (Eleanor Tomlinson) runs off in a storm and finds herself in Jack’s cottage. The storm causes one bean to fall to the ground and the tree grows up under the cottage, sending Isabelle into the land of the giants. Jack wants to go and rescue Isabelle. The King sends his Guards and their leader, Elmont (Ewan McGregor), and the princess’s betrothed, Lord Roderick (Stanley Tucci), who knows the giants live in this sky kingdom and now wants to rule the giants with a magical crown and have them proclaim him king. Lord Roderick has a flunky Wicke (Ewen Bremner, who I just saw in GOOD DAY TO DIE HARD). 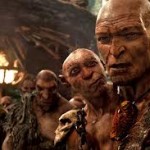 The community of males-only giants are led by General Fallon (Bill Nighy) who has a small head spurting from his shoulder (John Kassir) and several stand-out giants: Fee (Cornell John), Fye (Andrew Brooke), Foe (Angus Barnett) and Fumm (Ben Daniels). The most notable other giant is the cook (Philip Philmar) who has a great scene with Elmont.

Sure the giants are CGI but they were fun and well done. I absolutely loved the tree and the magnificent design of the world of the giants. I loved Hoult in the current WARM BODIES where he had to act. Tucci is always a hoot (he loves physically transforming himself) and McGregor had the sexiest costume. Tomlinson – who was photographed to look 10 years older than Jack – failed to make a strong impression but that may have been the screenplay’s fault.

I would see JACK again just for the wonderful production, direction, and terrific soundtrack.

Jack still has one bean left.