McConaughey eviscerates his rom-com/MAGIC MIKE legacy with an astonishing, terrifying performance. Makes Frank Booth and Max Cady look like the choir boys of seduction. Friedkin is back! 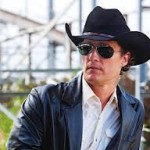 I was briefly forewarned KILLER JOE was “well-done sexual exploitation” and “wait until to see what Gina Gershon does”.

My movie companion said, after assaying the nearly-packed senior citizens who were at the first showing, “Do they know what they are in for?”

Well, I did and I still wasn’t prepared! 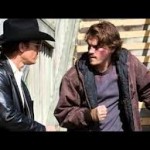 Claustrophobic and horrifying, we both yelled out loud. And then, in shock, left the theater. No one had walked out.

I loved director William Friedkin’s claustrophobic and horrifying BUG (2006), since I believe it was all true.

Both BUG and KILLER JOE were plays written by Tracy Letts, who also wrote both screenplays. What a brilliant collaboration between director and screenwriter/playwright!

The story begins, as all Texas trailer-trash stories do, with small-time dope dealer Chris Smith (Emile Hirsch) getting two grams of coke stolen from him by his mother. After getting thrown out, he goes to his father Ansel’s (Thomas Haden Church) trailer and dad’s wife Sharla (Gina Gershon) answers the door naked from the waist down and lets him in. She refuses to put on some pants.

Dad and step-mom keep asking Chris if he beat up his mother again. Chris is in debt now owing $6,000. Chris has a plan. Since no one will miss her, why not hire a hitman to kill his mom? The woman might be emotionally worthless, but she’s got an insurance policy worth $50,000. But the beneficiary is Chris’s blissed-out kid sister Dottie (Juno Temple). Suffocated by her mother when she was an infant, oxygen-deprived Dottie managed to live. But all the neutrons aren’t firing.

Joe Cooper has perfected his menace. There is no question he is sexually depraved. In fact, he has a sign over his head saying, “Beware. I’m dangerous and I have trouble reaching orgasm normally”. 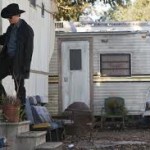 The terms of the negotiation sound quite reasonable and without telling Dottie she is the sacrificial retainer, is taken by Ansel to buy a dress at the local Goodwill for a “supposed” family dinner with Joe. Only Joe turns up. This neo-basement seduction is the kind of 8mm pornography that identified the 50’s (but without the fake wood panels). 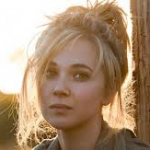 This is the guy who made FAILURE TO LAUNCH and FOOL’S GOLD, among a litany of other man-as-boy rom-coms? McConaughey’s Joe Cooper makes Frank Booth (BLUE VELVET) and Max Cady (CAPE FEAR) look like choir boys.

Now Joe is a regular member of the family and sleeping with Dottie. It is eating at Chris since Joe is taking his time fulfilling the contract and he hates Joe having sex with Dottie. Joe has a strong, dominant appeal – especially as he has perfected his “killer” attire – but he is also a shrewd psychopath with a keen perception of human dynamics. He’s a trailer park meth-head psychotherapist capable of welding a devastating punch to the face. 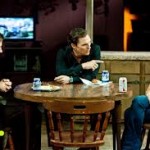 This is McConaughey’s greatest role due to its complexity. Joe is sentimental, charming, funny, and very smart. And everyone around him is rightly terrified of him – except Chris. And McConaughey uses every bit of dialogue to give us an insight into Joe.

I’m impressed that KILLER JOE was filmed in 20 days, which means there was little time for rehearsals or multiple takes. Everyone was able to quickly capture their character’s lowlife nuisances.

While 50 year-old Gershon has a few awkward missteps playing a tramp, her plumped-up youthful face announces her return to status roles but here – you have to ask – why did she agree to do this role? The answer – the third act is hers and she is devastating. I looked away in fear – so will you. Gershon was fantastic. I believed Sharla and Joe. I sided with Ansel.

I predict KILLER JOE will have iconic status due to its fried chicken scene – and the sincere, maniacal Joe Cooper.