You Are What You Eat

Director Aaron Wolf has meticulously crafted a wonderful muckraking documentary about the highly industrialized American food industry and its incestuous marriage to the corn plant. The film follows recent Yale graduates Ian Cheney and Curt Ellis as they return to their ancestral home of Greene, Iowa in search of the mysteries of the noble plant. Having been analyzed by a chemist they were determined to find out “how an acre of corn could get from a field in Iowa to {their} hair.” 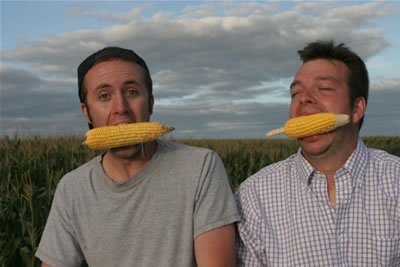 The film follows the lads over a nine month period as they, step by step, grow, spray and harvest an acre of corn with considerable help from the “professional” farmers in this tiny Iowa community. We follow along as they uncover how cheap corn is raised and harvested as cattle feed in eastern Colorado through interesting, laid-back interviews and corn-kernel pixilation. We are appalled to learn how cattle are force fed tons of corn and get so fat and sick they are kept alive through the magic of antibiotics. We are educated about the cheap sugar substitute we all know as high fructose corn syrup. Ultimately we learn that we generate huge amounts of empty calories due to the magic of the corn based agri-business. Just as Super Size Me uncovered the unhealthy fast food business, King Corn will make you realize that being well-fed has nothing to do with eating healthily.