Puts you on the ledge. 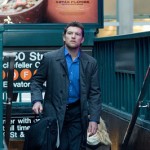 Remember when Sam Worthington was the next big thing after AVATAR? Remember when he outshone Christian Bale in TERMINATOR SALVATION? In my reality, Bale’s fantastic recorded outburst – rendered to dance music – was due to his frustration over his hapless role as John Connor. He knew Worthington had the better part. (Bale Out – RevoLucian’s Christian Bale Remix! http://www.youtube.com/watch?v=YTihsJQHt48&noredirect=1) The director of TERMINATOR SALVATION, McG, liked the remix and put a copy of it on his iPod, and Bale said he had heard the remix and thought “they did a good job”. 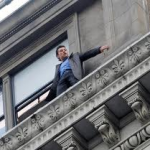 Anyhow, Worthington is back as “the man of a ledge.” A former cop, he escapes from prison during a day leave for his father’s funeral. He’s innocent. We quickly know he’s up to something when he doesn’t pay for his Manhattan hotel room with a credit card, but the concierge isn’t suspicious, so why should we? But when he cleans off all his fingerprints from his room service breakfast, we know he’s got a plan. 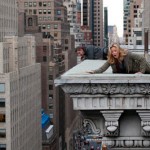 Nick Cassidy (Worthington) climbs out on the ledge and becomes a New York City sensation. This being The Big Apple of Corporate Evil and Personal Depravity, a crowd quickly assembles demanding he jump. It beats waiting for the 51st Street Lexington Avenue train.

First on the scene is beefy, badly dressed veteran detective Jack Dougherty (Edward Burns, whose TV commercial for his new movie NEWLYWEDS is on more times than Progressive’s “Flo”. I chant his line: “How do you spell ‘vasectomy’?” all day long). Hey, it’s Jack’s day job, so he wants the guy to jump and stop clogging up Manhattan traffic. 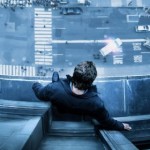 Next to arrive is burned-out police negotiator/psychologist Lydia Mercer (Elizabeth Banks). We know she’s burned-out because she sleeps late, takes aspirin when waking up, and is wearing a full face of makeup and has bed-sex tousled hair. Its Lydia’s scene to command and her job to get the “jumper” down.

It takes a while for Lydia to find out who the “jumper” is since TV cameras poised on him do not seem to get a good picture at his face. He’s not recognizable as the man behind the diamond heist of the century? Seems Nick stole the largest diamond ever – a 44 carat 4C (cut, color, clarity, carat weight) stone owned by wealthy real estate titan David Englander (Ed Harris, appropriately aged but showing off the body of a 22 year old). Apparently crushed into a million little engagement rings, Englander’s insurance company paid off the claim. Nick believes the diamond is safely hidden in Englander’s impenetrable vault. 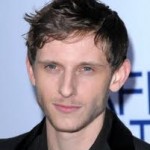 Lydia has a backstory that made her a pariah in the police community. A cop “jumped” on her watch. Now she is tasked with Jumper No. 2.

While Nick is causing mayhem on the ledge, his scrappy brother Joey (Jamie Bell) and girlfriend Angie (Genesis Rodriguez) are across the street shaming Ethan Hawke, Jason Bourne, and even old-timer James Bond. They laugh at MacGyver.

MacGyver: If I had some duct tape, I could fix that. 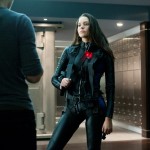 Ha! Joey and Angie are master criminals. Big-haired bombshell Angie’s background as a thief, bomb expert, and electrical genius were bred when she began her life of crime breaking into  empty houses as a high-schooler on Staten Island. They squabble like teenagers hitchhiking to the prom. Sure Joey wants to help his bro, but was he the best lover Angie ever had? 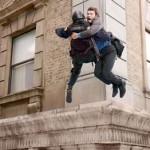 Directed by Asger Leth, MAN ON A LEDGE puts you on the ledge. It’s “[your name here] on a ledge” and I kept having to look away every time Nick peered down at the crowd or twisted his body talking to Lydia. I would have slipped just because of the wind up there on the 52nd floor.  For this reason alone, MAN ON A LEDGE delivers.

Looking for Leth’s and screenwriter Pablo F. Fenjves past credits, imdb.com has this highly interesting “Trivia” on Fenjves: “Lived next door to the house on 875 South Bundy Drive in Brentwood, where Nicole Brown Simpson and Ron Goldman were murdered. On the evening of June 12, 1994, Fenjves was the first neighbor to hear Nicole’s dog barking at around 10:15 pm.”