The story is straightforward. My interpretation challenges the notion that it is von Trier’s apocalyptic film. 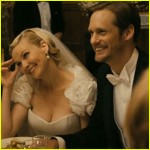 The film begins with Chapter 1: Justine. Justine (Kirsten Durst) and Michael (Alexander Skarsgård) are on their way to celebrate their marriage but the extended size of their white limousine cannot easily navigate the path to the lavish party. They are two hours late. Madly in love, Michael is “over the moon”. They appear to be a sweet romantic couple.

The men are in formal white tie. Justine and Claire’s parents are in attendance: Dexter (John Hurt) already has a new much younger wife; Gaby (the great Charlotte Rampling) is a bitter woman who did not bother to dress for the grand occasion and declares her contempt for marriage. She predicts the marriage will not last.

Why is Michael in love with Justine and how in the world did these two have a courtship that led to marriage?

Justine is clinically depressed and Michael, blinded by love, failed to notice. Michael is so desperately in love that Justine’s brief moments of normalcy is all he needs.

Why would anyone hire Justine? Her boss, Jack (Stellan Skarsgård), is entranced by Justine’s skill as an advertising maven. How can someone as uncommunicative as Justine relate to the buying public? After wildly praising her and promoting her, Justine cruelly insults him. 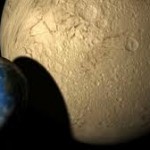 Just as the festivities begin, Justine goes into a catatonic-like overwhelming depression. She wanders off. She has sex with a minor guest. She takes a bath.

Gaby also isolates herself in a room while Claire takes on the prominent role as Justine’s patient caregiver.

Sex with a guest supplants wedding night sex. Michael leaves with his family in disgust. Justine could care less. She got a beautiful dress out of it.

The world is coming to an end. Earth is on a collision course with the planet Melancholia. Or, so Justine and Claire believe. John, who owns a professional telescope and has friends in the scientific community, reassures Claire it will be a mere fly-by.

Outside of Justine and Claire, who says the world is going to end? Google?

Chapter Two. Claire. Months have passed and Justine is living with Claire and John. Justine’s depression hangs over the estate just like that rogue planet looms over Earth. Justine barely gets out of bed, cannot eat and needs Claire to dress and bathe her.

Claire and John’s young son Leo (Cameron Spurr) is an observer to the fanaticism of
his mother and aunt. With his father, Leo eagerly charts Melancholia’s path.

As Melancholia gets closer to Earth, Justine becomes more stable. Now its Claire’s turn. She goes hysterical knowing they only have a few days left. She must be comforted by John. Justine does not reciprocate as Claire’s caregiver but accepts the end of the world with resignation. You could say Justine comes alive.

The fourth century Christian Gregory of Nazianzus explained the ascetic doctrine as “the pleasure of no pleasure.”

Oh, yes! Von Trier is again working through something very personal here. In von Trier’s Breaking the Waves, Bess’s (Emily Watson) husband Jan (Stellan Skarsgård) is paralyzed from the waist down from an accident. Urging Bess to have sex with other men and tell him about it, she complies. With each encounter, Jan gets better. Bess seeks out further sexual humiliation in an attempt to speed up his complete recovery. She spends the night with a sadist sailor (Udo Kier). I still see that sadist sailor in every Udo Kier performance. It marked him. He still scares me even in Melancholia. Kier plays the wedding planner.

Justine is one hundred percent certain the end of the world is at hand. She grabs Leo and runs off leaving Justine behind. Then re-united – John is the unbeliever and summarily disregarded by Claire – Justine, Claire and Leo hold hands in a tree branch tepee.

I read that von Trier chose Dunst because of her personal experience with depression. Dunst admitted that her depression and time spent at the Cirque Lodge Treatment Center in Utah in 2008 was due to the pressures of fame. Justine is a very tough role and like Charlize Theron –  who knew she was trapped playing the girlfriend of the star in films and needed MONSTER to change that – Dunst knew that starring in a von Trier film (and doing nude scenes) would be exactly what her career needed. Dunst was primarily known for kissing Brad Pitt in Interview with a Vampire when she was 12 years old and playing Mary Jane Watson in the Spider-Man trilogy (2002-07).

Von Trier is hard on his actresses. His female stars gain acclaim. Von Trier’s Breaking the Waves won the Grand Prix at the 1996 Cannes Film Festival. Emily Watson won many European Best Actress awards and was nominated for the 1996 Academy Award for Best Actress.

At the 2000 Cannes Film Festival, von Trier’s Dancer in the Dark won the Palme d’Or and Björk won the Best Actress award. However the accolades for Dancer in the Dark, there was much friction on the film set. It was widely reported that Björk said she’ll never act again.

Dunst won the Best Actress Award at the Cannes Film Festival in 2011 for her
performance in Lars von Trier‘s Melancholia. Yet Gainsbourg’s role is equally strong. While Dunst’s role for an actress is difficult – no emotional scenes and the internal process must be shown, Gainsbourg has the explosive suffering that von Trier needs from his actresses. She delivers.

Gainsbourg is the only actress to appear in two von Trier films.

Dunst and Gainsbourg are playing two aspects of one person in the throes of depression. They are both sullen, mute and use drugs to cope. They both have essentially abandoned their husbands. While Justine may be representing the Angelic dimension and Claire the Earth-Mother role, they are fused together.

The world must end because it brings them no joy.

In clinical depression the pleasure of living, the joys of the world, slowly go away. For suicides and depressed people, the world ends. Nothing remains.

When someone dies, the world dies with them. And now with cremation being so common, we don’t even leave our bones behind or bodies as nutrients for the earth.

Claire embraces Leo and Justine in the tepee and waits for the end. Her family is complete.

Melancholia is a fascinating film. It’s surreal and hauntingly beautiful. Von Trier is a master with a highly personal, uncompromising vision.