Narco Cultura is a very  disturbing documentary because it shows how the murderous drug conflicts in Mexico, driven by a never ending US demand for drugs  have spawned a  popular sub-culture  among Mexican Americans that glorifies drug violence and transforms drug lords into heroes. Shaul Schwarz  background as a war correspondent and photojournalist for the Israeli army allowed him to present a sharp perspective on this conflict. The film won accolades at the Berlinale, Sundance and other festivals. It is superbly executed and offers excellent visuals and editing. Its emotional and gruesome theme is relayed to us through the persuasive voices of investigators, singers, journalist, members of the cartel, and the helpless victims of the drug wars. Well researched and structured, Narco Cultura’s message is sobering.

Two stories are juxtaposed in this absorbing documentary.  We follow the murderous drug war in Mexico’s border town Juarez that has been destroying the city and its institutions over the last years and placed its residence in a constant state of fear.  With a parallel narrative, the director tracks the rise of a subculture which glorifies Mexico’s drug wars and has become very attractive among Mexican Americans, but also in among Mexicans as well. Sold out concerts featuring drug ballads (AKA narco corridos) celebrate the drug wars with sold out performances in most US states with large Latino populations

From the perspective of the crime investigator Richi Soto, who lives and works in the border city of Juarez, the city has morphed from an industrial city to “the murder capital of the world”. Jobs and business have disappeared, streets are empty, and dead bodies are part of the everyday experience. Several of his fellow investigators have been murdered and he does not leave his home except for work. Even his mother pays a protection fee to unknown parties to prevent her small business from being burned down. 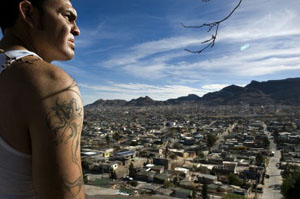 In Juarez the murder rate jumped from 320 in 2007 to 3622 in 2010. The rapid increase was prompted by the city becoming part of the drug war being fought by the Sinola cartel. Across the border, El Paso is the safest US city with only 5 in 2010 year. According to a Juarez journalist 97% of the 10,000 murders committed over the last 10 years have not been investigated, and the few going to trial rarely result in convictions.  There is no punishment discouraging more crimes from being committed.  Authorities collaborate with criminal organizations and prevent effective investigations.

As a narco corrido singer points out, in Mexico you gain respect only of you have influence and money, thus the admiration for the narcos working for the cartels. The five major Mexican cartels generated annually $40 billion in profits over the last years and the drug war initiated by former president Calderon does not seem to have had much of an impact, except for a sharp increase in civilian casualties, now estimated to have reached 60,000 in Mexico.

In nacro corridos the war on drugs and the torture and execution carried out by members of the cartels is glorified. “We are the best in killing, and kidnapping…we are blood thirsty and crazy and like to kill”. Their songs and videos cover abductions, murders and mutilations.  One song glorifies Torres, the top hit man for the Sinola cartel, and has been downloaded 5 million times, surpassed by a video on YouTube about how much his gunmen enjoy killing, watched by more than 13 million. Narco ballads are professionally marketed as consumer products by the Moviemento Alterado, a commercial narco corrida brand started by TWIINS Enterprise, a music company based in Los Angeles. They have the aspiration of making narco corridas the next hip hop movement representing a Mexican-American subculture and to date have become the most successful new music genre in the United States and Mexico. Their songs depict drug trafficking and draw themes from the exploits of the Sinola cartel with which its lead singer of the Buknas band El Kommander”, has ties. They are most popular among the US Latino audience, though radio broadcast is now outlawed in some Mexican states, but this does nothing to curtail internet distribution.

Walmart’s first order of narco corridos CDs only numbered 100; the next was for 50,000. Radio stations first refused to play them because they were too violent. Now they play them out of fear of losing touch with younger audiences. One popular corrido singer worked for free four years ago and now charges up to $45,000 per performance.  There are numerous websites such as blog delnarco.com and narco.com providing graphic, detailed and gruesome videos of torture killings and dismembering. One focusing on the battle between the Las Zetas and the Gulf cartels drew more than 3.7 million views.

There is a clear difference between narco corridos and gangster Rap; which also praised and celebrated violence. Corridos not only indirectly encourage violence but their narratives are based on the actual drug conflicts in Mexico; featuring a realistic portrayal of what is happening. Material is derived from the internet and direct contact with cartel members. As the documentary shows, singers are frequently contracted by the cartel members that provide the content, possibly sometimes before the killing takes place.

This emerging sub culture encompasses videos, feature films, and songs. Popularity among the young, as several teens explain in the film, is based on the appeal of the narco life style. They would like to be with a narco because narcos are a symbol of success and exerting power without impunity.  As an observers states, the teens look at narcos as contemporary Robin Hoods and their attraction is part of an anti-establishment rebellion.

Towards the end of the documentary, we see some startling imagery. Images of the common unadorned cemetery where a slain investigator is buried are juxtaposed with to a cemetery’s luxury compound which sprung up over the last three years. Here, the cartel’s dead, the ‘big dogs’, are entombed in small mansions; sometimes behind bullet proof windows.

For the investigator Richi Soto, the people of Juarez, ” live without hope in streets which are full of evil…they see policemen as angels of death…the youth have lost their values and idealize the devil”

Norco Cultura provides a new perspective on Mexico’s drug war as exemplified by the demise of Juarez. In conditions of despair with widespread illegal activities and corruption, the attraction of wealth and power of criminal organization grows as and is demonstrated by sub-cultural changes, such as the rise of narco corridas.