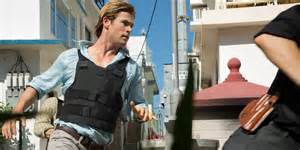 Michael Mann has made some good movies. BLACKHAT is not one of them.

Russell Crowe angered many A-list Hollywood actresses by declaring last week that there are plenty of roles for middle-aged women in Hollywood – if only actresses acted their age. In the Hollywood Bible, if an actress hasn’t made it to the top tier by 40, she has little chance of starring in movies. Like Julia Roberts, it’s all downhill from 40.

Not so for male stars as they age into their 70’s. In 2014’s THE HUMBLING, Al Pacino – age 74 – plays a famous star hunted and seduced by a young lady played by Greta Gerwig, who is 31. Gerwig’s character in the film is even younger!

Angelina Jolie – at age 39 – may be planning way ahead in terms of her Hollywood career by crafting herself has a director. Clint Eastwood is still directing movies at 84, Woody Allen is 79, Ridley Scott is 77 and Michael Mann is 71.

Russell Crowe may be right about middle-aged actresses who want to play ingénues. But what does he think about directors who keep directing well into their 70’s? Isn’t it time these dinosaurs stepped aside as well?

Mann has history, but BLACKHAT was a paycheck. Maybe he told the studio executives great stories about Robert De Niro and Al Pacino. Maybe he’s a fascinating dinner guest. Maybe he didn’t bother reading the script. It was, after all, an “all expenses paid” few months in Asia.

Mann has lost that angry edge and dark view of mankind that made his successful films so fascinating. Mann did not take time with BLACKHAT. Perhaps blame should go to the five first and second assistant directors.

The big finale is so messy you wonder why no one stepped up and said, “Hey, machine guns firing and the procession goes on?”

Frankly, the fault begins with the screenwriter, Morgan Davis Foehl.

The timing is right for BLACKHAT with filmgoers knowing that hackers can invade “secure” networks. We also know how difficult it is in real life to boot up a new computer and set your home page or how we allow software technicians access to our computer while trying to solve a virus problem.

With the enormous revenues from the Asian film market, we are getting used to seeing our Hollywood stars having Asian co-stars and love interests.

BLACKHAT begins in China where the Chai Wan Nuclear Power Plant explodes due to a hacker attack. And there is only one way to hunt down the hacker. Chinese agent Chen Dawai (Wang Leehom) needs a team made up of his tiny, pale, 80 pound sister Chen Lien (Wei Tang) and an American, Nicholas Hathaway (Chris Hemsworth).

FBI agent Carol Barrett (Viola Davis) meets Dawai and slams down the dossier on Hathaway. He’s a damn criminal serving 13 years in a Federal prison not for hacking. Dawai explains they co-wrote the program while roommates in college that the hacker used to destroy the nuclear plant.

This bit of information was not in Hathaway’s FBI jacket file?

Big, blond and gorgeous, Hathaway is like a Zen master in prison. He’s got no prison “daddy” because, as we see later on, Hathaway knows how to fight dirty. He’s also a good guy who only stole from banks and large corporations. He’s an underwritten character. Mann does not like Hemsworth very much – at 71 years old, Mann doesn’t see his sexual appeal. He just sees Hemsworth as a tall actor. There is no eroticism in Hathaway. In fact, he’s kind of asexual.

Dismissing Hathaway’s sexual appeal for the female members of the audience (let’s not draw THOR into this, but it did make a star out of Hemsworth for good reason), he further “castrates” his star by giving him a shallow, girl-child as a love interest. There is absolutely no chemistry between Hemsworth and Tang. When does an actor like Hemsworth get love interest casting approval? Must we wait until Hemsworth is 74 years old to see the sex magic? Hemsworth should have had his agent or manager on set making sure he was shot as a leading man.

Chris, fire those people! And you need a better contract lawyer.

Older directors have no patience with the subtleties of nuance. It’s get the shot done, move on, then go back to the hotel. “I want my dinner hot and waiting for me when I get back.”

The first rule of making an action-thriller is this: have a terrific villain who is stronger, meaner, and nastier than your hero. Who is the villain here? When we finally meet him, it’s a huge let-down. His henchman, Kassar (Ritchie Coster), is visually up to the task but is only muscle.

The team finds out that the villain has stolen 74 million dollars but still wants more. Why?

It seems like a lot of other stuff was filmed and thrown away. What remains is implausible, sloppy, and fails to deliver any tension.