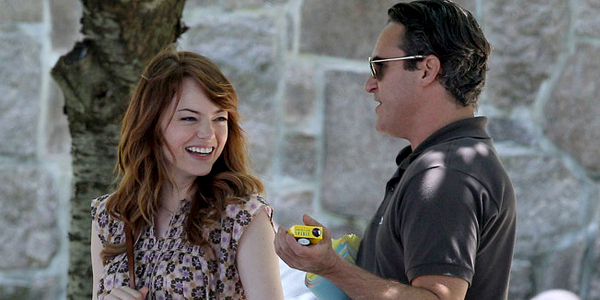 Do you have a moral curfew? If you could go back in time, would you baby Hitler to save millions of people’s lives? Would you have killed Judas to save Jesus?

Abe Lucas (Joaquin Phoenix) ticks off every criteria as the archetypal rebel, anti-philosophy philosopher. He is hired to teach at a liberal college after leaving his last post for some kind of unsuitable behavior. He’s single, unkempt with a potbelly, no attachments, a reputation for sleeping with students, and a complete antagonistic view of hallowed philosophers. He is also a gifted professor. Abe is considered a “get” by a Rhode Island liberal arts college faculty. His arrival has the female students wondering which one of them will become his lover for the semester. It is his unhappy colleague Rita Richards (Parker Posey) who makes the initial desperate claim to be his lover. She is married, past 40, unfulfilled and wants a reckless Anna Karenina love affair.

Abe is bored with life. Nothing excites him. He has writer’s block. He feels his life is meaningless. He’s in the gripe of existential despair. He’s impotent, to boot.

It is the passionate A student Jill (Emma Stone) who quickly establishes a friendship with Abe. Jill has the prefect boyfriend who has none of the provocative danger and genius she attributes to Abe.

What lifts Abe out of his malaise is – in my opinion – a variant on the philosophical thought experiment in ethics called “The Trolley Problem”.

There is a runaway trolley barreling down the railway tracks. Ahead, on the tracks, there are five people tied up and unable to move. The trolley is headed straight for them. You are standing some distance off in the train yard, next to a lever. If you pull this lever, the trolley will switch to a different set of tracks. However, you notice that there is one person on the side track. You have two options: (1) Do nothing, and the trolley kills the five people on the main track. (2) Pull the lever, diverting the trolley onto the side track where it will kill one person. Which is the correct choice?

Since writer-director Woody Allen chose to call the film IRRATIONAL MAN, I guess we know his position on the ethical, nonsensical conundrum he creates for Abe. However, Abe is so alive and driven by his reason – that I – probably due to my questionable ethics – agreed with him.

Phoenix understands the role completely and brings different emotional and intellectual levels to his performance. Since Woody Allen is well-known for not directing his actors, Phoenix and the other cast members should be acknowledged for their insightful performances. Abe’s exhausted, wasted face transforms when his friendship deepens with Jill. I am always amazed how this is done. Is it the work of the cinematographer (Darius Khondji), or the makeup department, or just the magic of cinematic lighting?

How does Meryl Streep go from playing her real age in INTO THE WOODS and AUGUST: OSAGE COUNTY to a hot, high-cheeked 45 year old in RICKI AND THE FLASH?

Phoenix’s co-star Emma Stone works hard to show her obsessive attraction to Abe. But why did she so suddenly become disillusioned with Abe’s specialness?

I consider Parker Posey and Amanda Peet Hollywood Poison. But Peet is perfectly cast in the TV series TOGETHERNESS, and Posey has the retched, wandering hunger that Allen conceived for the role. It’s an intentional unattractive part but Posey serves it well.

As Woody Allen touches 80 years old, I am sure his films will delve into the bitterness and pettiness of people, his right to lead the life he wanted, and will use the medium of film to avenge everyone who has wronged him. I expect his last films to have a biting, cruel edge.