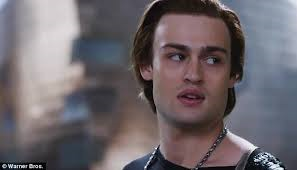 A girl from the “projects” rather stay put than be the hereditary Queen of a bunch of planets including Earth. Reincarnation gets a slap in the face. The reconstituted Queen hates her kids.

Jupiter Jones (Mila Kuis), a downtrodden Russian immigrant, lives with her family in Chicago and sleeps in the kitchen. As a cleaning lady with her mother and aunt, Jupiter always gets toilet duty. She has big dreams and hates her life. Jupiter does not know what she wants to do except she does not want to be owner and Queen of the Milky Way Galaxy – which includes Earth.

What I learned from JUPITER ASCENDING is that democracy and “all men are created equal” is a cute Earth experiment. The Universe has been divided up by a powerful royal family. The caste system rules the Universe. The matriarch has been murdered and her three children are fighting over their ownership of her bounty of planets. The Queen’s son, Balem Abrasax (Eddie Redmayne) is an arch travesty of a baddie. He speaks in whispers and then screams. Balem wants Earth because it’s ready to be recycled. Brother Titus Abrasax (sinfully beautiful Douglas Booth) wants Jupiter’s share of the Universe and has a good scheme in play. Only Kalique Abrasax (Tuppence Middleton) is happy to have mom – in an exact DNA match-up in the new guise as a cleaning lady – around.

Queen Abrasax must have been a nasty piece of work. Her Karmic Debt is being paid off working as a cleaning lady in the United States, which does not officially recognize royalty – unless you are the star of a scripted reality show.

Who can cheer for Jupiter? She hates her going nowhere life but when transported to a magical planet she once called home refuses the honor and the gorgeous gowns. It’s as if the 14th Dalai Lama got up one morning and said he wanted to go back to being a Tibetan peasant farmer.

Jupiter is kidnapped by Caine Wise (Channing Tatum), a bounty hunter who did some terrible deeds with his former buddy Stinger Apini (Sean Bean). Stinger hangs out on Earth and helps Caine fight off an army sent by Balem. Caine is a genetically-engineered warrior – half man, half wolf.

Forget the magnificent trappings of royalty, Jupiter has to get back to work cleaning the homes of rich people. Her dialogue consists of “I want to go home.”

Directing the fate of Earth and other colonized planets? Jupiter wants no part of it.

In 2006 an Indian woman married a cobra – the snake-god Debo. So why be shocked that a Chicago girl and a half wolf fall in love?

The Daily Beast and Academy Awards pundits are raising the “Norbit Effect” in relation to Julianne Moore and Eddie Redmayne, both nominated in Best Actress and Best Actor categories.

Would the Oscar voters rush to see SEVENTH SON and JUPITER ASCENDING before voting? Has the bad reviews of both films – and Moore’s and Redmayne’s laughable performances – affect their ballots?

I haven’t seen SEVENTH SON. Redmayne is – without a doubt – in his own universe in JUPITER. He stops the movie. Was his performance molded by the filmmakers or did they let Redmayne craft the role himself? Stars are not usually directed. It is an insult to them. Are you going to tell George Clooney where to stand? Would you tell Brad Pitt to do another take with more emotion?

The “Norbit Effect” or “Norbit Curse” began in 2006 when Eddie Murphy starred in the critically panned NORBIT as well as DREAMGIRLS. Murphy was fantastic in DREAMGIRLS but the stink of NORBIT was so embarrassing that there was a theory – now a Hollywood legend – that it ruined his chance to win an Oscar that year for DREAMGIRLS.

JUPITER is Mila Kunis’ first starring role. Frankly, her dominant features blurs everything behind her. Kunis has had a terrific career with small roles. “Less is more” for Kunis. As for Tatum, so far I adore this guy and give him a pass. Hell, he’s in a movie by The Wachowskis! And they paid his quote? He tries the best he could but compared to Redmayne, JUPITER  is his Othello.

While actors and actresses have only so many failures before they are dismissed as “toxic” (Johnny Depp is on the threshold), filmmakers have a much longer shelf life.

The Wachowskis have weight. THE MATRIX – with a reported budget of $65 million – made $464 million. According to The Guardian, The MATRIX TRILOGY made in excess of a billion and a half dollars. After the failure of SPEED RACER (Budget: $120 million. Worldwide gross: $93,945,766), the budget for CLOUD ATLAS was reported to be $102 million. Warner Brothers contributed around $20 million. According to thenumbers.com, CLOUD ATLAS made $130,673,154 worldwide and only $13,858,599 in total domestic video sales.

What will The Wachowskis do next? If you don’t want to see the TV series, THE MATRIX, THE MATRIX cartoon show, or the Broadway musical, THE MATRIX LIVE, then go see JUPITER.

The construction of the House of Abrasax is fantastic and the regeneration of DNA is a nice twist on the unwilling princess genre. But the premise that a poor girl would give up her place as the owner of planets, is ridiculous. Is there any audience member – male and female – who would do what Jupiter did?