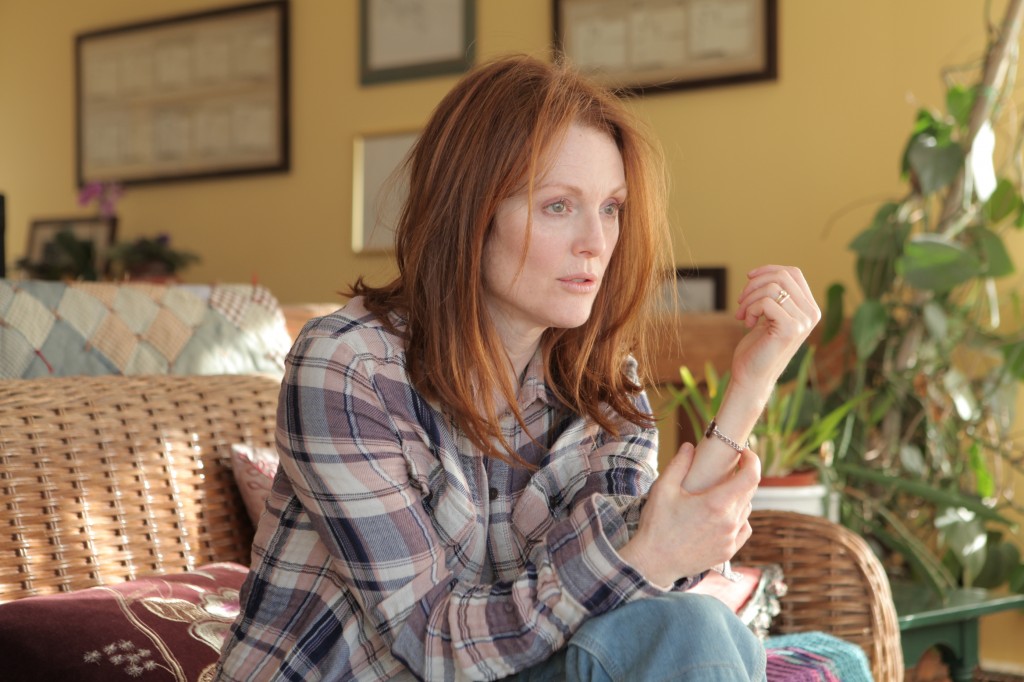 At age fifty, Alice Howland (Julianne Moore) has it all: a Columbia University linguistics professorship, a devoted husband, and three loving children. Her life is a whirlwind of work and family, and she thrives on it. Flying to L.A, Alice is lecturing at UCLA when something unexpected happens. Mid-sentence, she loses a key word and waits awkwardly until a replacement comes to her. This is unusual for this highly accomplished academic. After spending time with her daughter Lydia (Kristen Stewart) who, against her mother’s wishes, is striving to be an actress, Alice returns to New York. There, a second mental lapse occurs. While on her regular run across campus, Alice loses all sense of her bearings, the bottom just drops out; she goes blank. Although she keeps this from her family, Alice begins to see a neurologist and goes through a battery of tests. She is convinced she has a brain tumor, but the doctor raises an even more disturbing likelihood: Early Onset Alzheimer’s disease. It’s at this point, Alice breaks down and tells her husband, John (Alec Baldwin). John’s initial reaction is one of skepticism.

Accompanying Alice to her next doctor’s visit, he raises the issue of a genetic test, and the doctor concurs. Unfortunately, Alice tests positive for the presenilin-1 gene, an indicator of Familial Early Onset Alzheimer’s, a rarer form of the disease that has a fifty percent chance of being passed on to her children. At the next family gathering Alice breaks the news. The children are all stunned by this revelation and find it difficult to process. Throughout the following weeks, Alice has to deal with the ramifications of the disease on her marriage, her family and her career. Posing as someone enquiring on behalf of a parent, Alice visits the Alzheimer’s unit of a local nursing home. Seeing a fate she cannot accept, she makes a drastic decision that will radically affect her future when she gets to the point of incapacity. When a summer spent at a beach house brings a sense of renewal, Alice struggles against all odds to maintain her life, her relationships and her sense of self.

“Still Alice” was written by first time novelist Lisa Genova and published by Simon and Schuster in 2009. “Still Alice” debuted 5th on the New York Times bestseller list and spent over forty weeks on the list. In December 2011 director Richard Glatzer received a phone call from the Brit-Australian producer Lex Lutzus, asking him to take a look at a novel for adaptation. It was one of those out-of-the-blue opportunities that filmmakers live for. The outline they pitched, a brilliant woman in the prime of life receives a diagnosis of early onset Alzheimer’s disease, suggested a film about illness, sadness and loss. It just felt too close to home.

Earlier in the year, Glatzer had visited a neurologist in Los Angeles as a result of a slight slurring of his speech. The doctor diagnosed ALS. Glatzer spent a lot of time in the following months dealing with the repercussions of this, both medically and emotionally. Reading the first few chapters of the book, certain similarities resonated eerily with his own experience. The neurologist Alice initially visits asks the same questions Glatzer had heard at his early examinations when there were suspicions of a stroke; and the growing sense of dread as the diagnosis approached, the sense being cut down when life was at its fullest, was all too familiar.

The book is a compelling story, made emotionally accessible by Lisa Genova’s forthright, honest writing. The movie has the same crisp and direct tone. The novel looks in detail at the quotidian impact of memory loss on Alice’s professional life, her daily routines and her social life. The movie resists sentimentality and gains tremendous emotional power through restraint. It has a universal insight into the way families behave in the face of illness or old age with its Lear-like template for a three-child family that was echoed beautifully in Lisa Genova’s book. There’s something undeniably inspiring in Alice, in her tenacity, her willfulness, the way she would never take it lying down. Whatever the disease brought, she’s determined to handle it in the most practical way possible. The literary Alice we imagined from the page started to lose her dark curly hair as it turned a fiery red.

Julianne Moore projects the scintillating intelligence and complexity of a linguistics professor and also the vulnerability and simplicity of the later stages. She’d be able to master every beat of the character’s deterioration. She’s quite simply one of the finest actors on the planet. The key concept is the subjectivity of Alice’s experience, that the audience should understand her point of view and be privy to her internal life in a way other characters in the story weren’t. The film require a deeply personal camera and editing style, responding to her mental state, her moods, her perception, breathing with her. The ending of the film is as powerful as it is unexpected, emotionally wrecked.