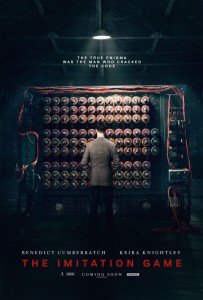 Hollywood biopics infantilizes its audiences. If someone’s true story ended badly, it’s the text epilogue that tells us what happened. When Hollywood does another biopic of Jesus’s life they will leave out the crucifixion.

We can’t handle seeing the truth about people’s lives. Especially if their lives do not have a happy ending.

In 2014 there were quite a few biopics. KILL THE MESSENGER’s text epilogue informed the audience that Gary Webb committed suicide with 2 shots to the head via a .38 caliber pistol. AMERICAN SNIPER’S text epilogue told of Chris Kyle’s death by gunshot by a former soldier with PTSD at a gun range no less!

In THE IMITATION GAME, Alan Turing’s contested, fascinating death is a text epilogue.

Audiences were saved from seeing these horrific but highly dramatic scenes. How one dies is as important as how one lived – especially if it wasn’t sudden death on a sofa while watching TV.

Apparently, unless it’s the biopic of Oscar Wilde, a famous person’s homosexuality is not relevant even if it has life-altering significance. Remember Ron Howard’s 2001 biopic of mathematician John Nash? What was missing? Nash had recurring liaisons with other men. In 1954, Nash was arrested for indecent exposure in a bathroom in Santa Monica, which cost him his position at a RAND Corporation think tank. Being crazy is okay. Being openly gay is a different matter. In FOXCATCHER, John du Pont’s sexual demands on the wrestlers he funded is never even implied.

The UK’s offensive policy of criminalizing homosexual behavior in the 1950’s played an important part in Alan Turing’s life and – it has been generally assumed – his death. THE IMITATION GAME’S text epilogue tells of Alan Turing death by suicide.

Alan Turing died by eating a bite from a cyanide-laced apple. Intentional, unintentional, or staged?

Alan Turing (Benedict Cumberbatch) is a strange fellow. British intelligence has gathered together a remarkable group of men to decipher the German Enigma machine. The Allies are losing the Second World War against Hitler and the only way they can win is by knowing exactly where the Germans plan to attack before they do. These instructions are sent via The Enigma.

There is a flaw. People are punching in the codes.

Why is Alan so weird? We don’t know. He attended a private school where he was constantly bullied for his obsessive behavior – the peas can’t touch the potatoes kind of thing – until an older student, Christopher Morcom (Jack Bannon), befriended him and introduced Alan to cryptology. It’s a secret embedded into nonsense, unless you have the deciphering code. Alan had a secret also. He was in puppy love with Christopher. It ended badly.

Giving everyone a shot at the highly classified work being done at Benchley Park, Alan puts a puzzle in a newspaper. Figure it out in less than 6 minutes and you get an invitation to Benchley for further testing by Alan. Of all the candidates only two make it to the finals, one woman, Joan Clarke (Keira Knightley), and one young man, Peter Hilton (Matthew Beard). Alan fired two original members for being useless and Joan and Peter join the surviving team: Hugh Alexander (Matthew Goode), John Cairncross (Allen Leech) and Charles Richards (Jack Tarlton).

Alan’s neighbors call the police when they hear noise in his apartment. Detective Robert Nock (Rory Kinnear) is insulted by Alan’s rudeness and, using Sir Arthur Conan Doyle’s detective’s manual as his guide, becomes suspicious. What is Alan Turing hiding? Is he a spy for the Russians?

Joan understands – or rather, accepts – Alan’s colorless personality. They both love puzzles and spending time together. Like current-day executives who want to climb the corporate ladder, Alan knows having a wife will help him quash those gay rumors. Joan needs freedom from her family. They get engaged.

While working on “The Christopher” – the name Alan gives to his challenger to The Enigma – Alan is interviewed by Det. Nock and freely admits to paying a man to touch his penis.

“Christopher” works, the team dissolves without public glory and the Second World War has been won. In 1952 Alan is arrested for homosexuality. In summing things up, Alan tells Joan he accepted the judge’s offer of chemical castration instead of prison. End of the Alan Turing story, except for those “hated-by-me” text epilogues.

THE IMITATION GAME’S Norwegian director, Morten Tyldum, must have been intimidated by his first foray directing a big film like this. I loved his 2011 U.S. breakthrough film, 2011’s HEADHUNTERS. It had a distinctive style and a cruel sense of charm. If only Tyldum – like so many foreign directors who get seduced by Hollywood with big paydays and big budgets – were to deliver exactly what got them noticed in the first place.

Cumberbatch knows how to be subtle and his Alan Turing is not an exaggerated nut except when he is upset. He starts speaking in tongues and holding snakes.  Cumberbatch plays Alan as just socially awkward and at times just child-like. Acknowledged geniuses are usually arrogant, but the filmmakers have chosen to make Turing just blissfully uninterested in other people. He tries to be friendly by bringing the team members apples. Matthew Goode is terrific as Alan’s rakish foil, Knightley tries her best to show chemistry with Cumberbatch’s portrayal of Turing, and we always love Mark Strong (with or without hair).