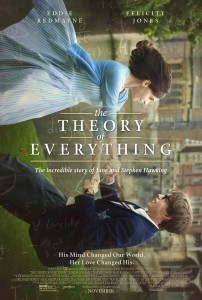 Director James Marsh (“Man on Wire”), with this film, has once again made the transition superbly from documentary to narrative filmmaking with this brilliant portrait of world famous cosmologist Stephen Hawking. The film, adapted by Anthony McCarten, from the Jane Hawking book “Traveling to Infinity: My Life With Stephen” starts shortly before he progressively gets paralyzed by ALS as a doctoral candidate at Cambridge University.

The unconventional nature of Hawking’s life is depicted with gusto as he authors a number of ground-breaking papers seeking to find “one single unifying equation that explains everything in the universe”, while, at the same time fathering three children with his remarkable wife Jane(a pitch- perfect Felicity Jones who provides a calm intelligence to everything her co-star does)

Dr. Hawking is the author of a popularizing book about physics titled “A Brief History of Time” which is also the title of a documentary by the wonderful Errol Morris.

Biopic genre films tend to follow many formulaic conventions, but, what singles this one out is the amazing performance of Eddie Redmayne, himself a Cambridge grad, which is rich in emotional intelligence. Redmayne’s depiction is founded on not just imitation but on authentic inside- out characterization. His university age Hawking is so beautifully realized that even as the scientific genius loses mobility, facial articulation and finally the ability to speak we can still glimpse in Redmayne’s eyes traces of the man he was before the disease trapped his true personality.

In this busy holiday season, take the time to put this one on your list of movies not to miss.