This year’s Seattle International Film Festival served some tasty Asian treats. Here’s the movie wrap-up including their degrees of spiciness–from one star to four.

Oversaturated with pop flavor, this schizophrenic rom-com cum thriller flaunts a tres chic Taipei. But its story is stretched beyond believability. When a young man gets dumped by his girlfriend for Paris, he vows to learn French. Oblivious to Rosetta Stone, or too cheap to take a class, the man opts to teach himself for free at the local bookstore. Daily, he squats gracelessly on the store’s floor learning to parelz vous Francais from a book. Unbelievably, a pretty female clerk becomes obsessed with him. Although the son of noodle shop owners has no personality, no money nor any interest in the clerk, she continues to pursue him. Meanwhile, a gang boss gives the man a package to take to Paris and misguided thugs give chase. The man, his buddy, the clerk and thugs all meet cute at a food court where they’re tossed into the mix and blended well. Forget Paris, picturesque Taipei looks way more delish.

It’s 1906 Hong Kong where the Yang Qing Dynasty rule. But pro-democracy leaders have planned a secret meeting to start a revolution under Dr. Sun Yat-sen. Anticipating his arrival, the organizers arrange for protection against government assassins with a surplus of bodyguards who accept their mission with courage, duty and honor. Teddy Chen directs this martial arts showcase with a lesson about justice. He’s also included some history about the British occupation, and how the island state was carved up by greedy foreigners who also brought colonized Indian sikhs with them. And, there’s a story about Chinese classism, and the wealthy businessman torn between joining the insurgency and keeping his idealistic son safe from it. Another compelling plot concerns the son’s loyal servant who must decide between protecting the charge he grew up with and the marriage he yearns for with a rich, but crippled woman.

The Chef of South Polar (Japan)

Starring Sakai Masato (Shinsengumi, Atsuhime), this comedy takes a clever look at the effects of isolation on eight Japanese scientists. After being assigned to a research base at the South Pole, each man suffers from homesickness in his own unique way. Meanwhile, Chef Nishimura (Sakai) tries to distract them by creating delectable dishes served at formal sit-down mealtimes. Nurturing his co-workers with classy cuisine, the chef masks his own growing sense of uselessness as his family all but ignores him during his year long-appointment. From raiding the pantry for ramen at midnight to making ‘shave ice’ with fresh snow and cherry syrup, the crew is as artful as the featured food. One hysterical scene has the chef complaining about the overabundance of unshelled peanuts then using one for a chopsticks rest.

Comically charming and exquisitely engaging, this tale about two people forced into courtship by well-meaning Hong Kong family members stars Tang Wei (in her first film after being blacklisted in China for making Lust, Caution). While the bride-to-be already has a boyfriend (in prison for assault), the unwilling groom is 41, living at home where he’s pampered by an aunt, and serving as a boy-toy for his ex-girlfriend—an older, successful, photographer. Still, the couple reluctantly agrees to join in the charade to keep their families at bay. But they soon discover that they have more in common with each other (like their passion for detective novels) than they do with their loser lovers. Gung hay to director Ivy Ho! 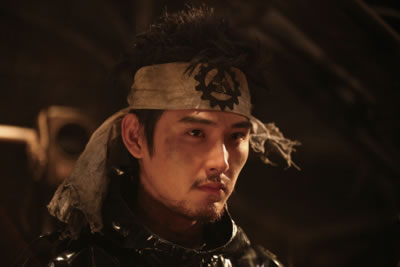 Director Sabu’s take on a dark and farcical manga (Japanese graphic novel) addresses class issues while spinning a subversive message. Matsuda Ryuhei (Taboo) stars as the mutinous leader aboard a Japanese crab canning boat circa 1929. Although the autocracy is portrayed one-dimensionally, the oppressed laborers aren’t. Their utter futility as one plot, to overthrow their masters, after another goes awry is deftly presented. From having their mass suicide interrupted by the rolling sea to the Japanese Imperial Navy cruelly sabotaging their rebellion, the proletariat is relentlessly rendered impotent. A skillful combo of comedy and drama draws the viewer into this highly explosive subject. The Russian rescue boat scenes replete with caviar and Cossack dancing are exquisite.

Another movie based on manga, this tale takes place in a 1940’s fictional Japanese city where WWII never happened. When a circus acrobat learns that his identity was stolen by the masked master thief, K-20, he desperately tries to clear his name. Forced to demonstrate his swashbuckling skills, he leaps from tall buildings with gravity-defying tumbling. Assisted by the beautiful and wealthy girlfriend of the film’s villain, our hero is the best reason to see this movie–megastar Takeshi Kaneshiro who’s hotter than wasabi!

Watching this film while at a film festival, about a filmmaker at a film festival, is like experiencing déjà vu. But after the first few intriguing scenes, this captivating idea quickly collapses onto itself. As the filmmaker in the film arrives at the film festival in the film, he’s forced to stand aside and watch a younger filmmaker earn all the accolades. At a lecture where he’s supposed to be the main attraction, the students ignore him. Envious and insulted, the filmmaker starts playing hooky when he’s supposed to be judging films and mingling with festival organizers. Attempting to portray brutishness, the uncharismatic Kim Tae-woo seems more lost and confused than thoughtless as he fails to engage. Skipping out on jury panels, the filmmaker finds himself sloppily drunk at wild parties and hitting on unavailable women with husbands. 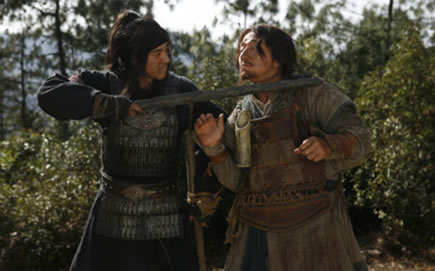 Question: When is a Jackie Chan flick not a Jackie Chan flick? Answer: When it’s based on a script that he wrote 20 years ago with a serious story line that highlights him genuinely performing. Even though Chan still acts the clown in this tale about Chinese warring clans, he’s also tragic as the reluctantly drafted little soldier who survives a major battle, captures an enemy general, and attempts to turn him in for a reward. It’s a road trip complete with martial arts antics and a plethora of attackers trying to prevent Chan from his goal. Reportedly, Chan envisioned the role of the warlord for himself, but grew too old for the part. Instead, American Taiwanese singer Wang Leehom stars as the eye candy that’s hotter than wasabi!

Love in a Puff (Hong Kong) 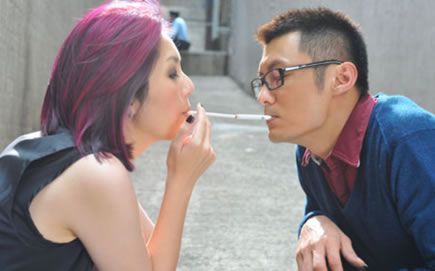 As Hong Kong cracks down on indoor smoking, workers meet in the streets for cigarette breaks, gossip, and flirtatious banter. Gathered around outdoor public ashtrays, the smokers puff away while discussing the latest breakups and love affairs. After a man’s girlfriend discards him for a French co-worker, he’s drawn to a Sephora salesclerk with a bold and gutsy attitude. Before long, they’re hanging out together and trying hard not to fall in love with each other. The salesclerk, who lives with her sullen boyfriend, is imbued with personality and, played by Miriam Yeung, nearly steals the movie. As the couple starts to become a couple, they promise to quit their bad habit. On the last night before cigarette prices go up, they travel the city stocking up on their favorite brands. The scene where they’re caught smoking by a security guard, then pretend to be Japanese and Korean is side-stitching hilarious. 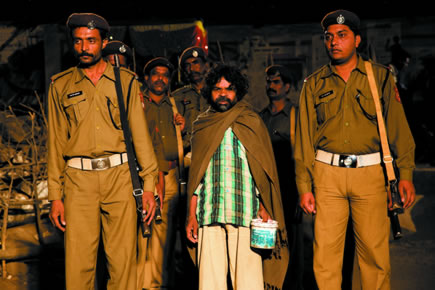 Suicide hasn’t been this funny since the movie M.A.S.H. Here’s another film that tackles a caste system with a comic flair in order to move audiences to seriously contemplate the issue. An impoverished farmer in rural India convinces his younger brother (both roles perfectly cast, no pun intended) to commit suicide so his family can receive a government check. As the media descends on his village and bumbling bureaucrats abound, the terrified younger brother has regrets. Every minister of every department has something to say to further his or her own career, and the media is no better trying to outdo each other for press exclusives. First time director Anusha Rizvi has created an absorbing, chilling and hilarious film.

The Prince of Tears (Hong Kong/Taiwan)

A mist of confusion settles heavily over this cinematically stunning drama. While an intriguing plot entices us into believing we’re watching a beautiful couple falsely accused of being communist spies in 1950’s Taiwan, we’re not always sure it’s all just a bad dream. A handsome soldier and his gorgeous wife are raising two daughters, the older from his previous marriage. The family goes on walks in the woods while the father whimsically plays an accordion. There’s an “uncle”, the father’s best friend, with a menacing face caused by an ugly scar. Suddenly, the parents are arrested and the younger child is forced to live with the “uncle”. While schoolchildren are forced to drink skim milk courtesy of Uncle Sam, a general’s beautiful young wife quotes seditious versus from a children’s fairytale—The Prince of Tears. The era is beautifully captured, the costumes exquisite, the music entrancing, but somehow the most important element is missing.