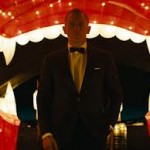 Thank God they got rid of the silly gadgets. Bond rides the subway and follows the “casual Fridays” to work. What’s next? A shot of a bottle of Viagra? 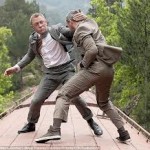 James Bond (Daniel Craig) is getting old. So when he is shot fighting with an assassin on top of a train on “M’s” (Judi Dench) orders, he decides to stay dead and relax on the beach in a Polynesian hut. Apparently Bond is wallowing in self-pity, hard drinking, and taking a well-deserved vacation.

Somehow Bond gets back to London using a fake passport when he hears that MI6 has been the target of a terrorist attack. His country and “M” needs him. “M” is the one with ice running through her veins and with not a whit of grudging favoritism. She is the mother you can never please. 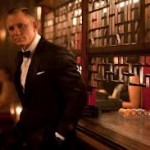 During Bond’s psychological evaluation to return to work, is the aide-mémoire of the classic BLADE RUNNER question: “Describe in single words only the good things that come into your mind about… your mother.”

Bond is mad at “M” for directing another operative, Eve (Naomie Harrris) to take the shot at the fighting duo on the top of the train. Told it will not be a clean shot, “M” says, “Take the shot!”

Has 007 forgotten he is a disposable tool of MI6?

Someone is after “M” having hacked into her computer. This bad guy, Raoul Silva (Javier Bardem), has the computer chip of names Bond was after and he’s releasing the names of five British secret agents every week. Hollywood action screenwriting 101 rule: the clock must be ticking.

Bond takes his shirt off, wears a tux once in a Macau casino (unlike the casinos here in Las Vegas where everyone wears flip-flops), has a flirty encounter with a mysterious beautiful woman, Sévérine (Bérénice Marlohe), and has no interest in $4 million euros in a briefcase. 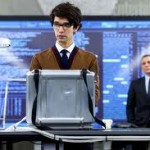 After sneaking into Sévérine’s shower, he is rewarded with a face-to-face meeting with Silva.

As we all recall the now iconic tête-à-tête between Bond and Vesper on a train, Bond and Silva have their own memorable private moment. Silva just might rival Dr. No in the Bond pageantry of villains. The homoerotic suggestion by Silva is perfect. Especially since Bond boldly questions why Silva would think it would be his first time. Huh? 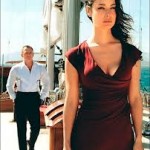 Well, we all know the legend of British boarding schools.

Silva knows everything about Mr. Bond down to what he had for breakfast. He would certainly know about his childhood and would not need intentionally-misdirected clues to find Skyfall, the Bond family mansion.

Reminding us that this re-worked Bond is no longer a gadget-laden dinosaur, he has a new quartermaster, “Q” (Ben Whishaw), a twenty-year-old computer genius. For his high school junior science project, “Q” built a space shuttle in his parent’s garage. 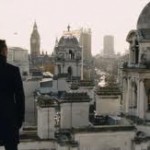 Do we really care about the housekeeping of British Intelligence? When are committee hearings ever thrilling? And why do we need not one bureaucrat, but two, introducing “M’s” boss, Gareth Mallory (Ralph Fiennes) discussing her golden parachute?

Why must we see “M” firing a gun and making Molotov cocktails?

Did director Sam Mendes appease Dench with a shoot-out instead of a sex scene with James? 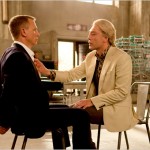 Everyone seems tired of the legendary James Bond, so he is re-invented as a more complex character. The sexual ruthlessness that was the true subliminal appeal of 007 is muted. 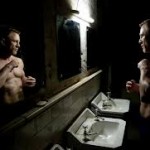 Craig, who resents the sex symbol beefcake tag, first and foremost, considers himself an actor, not a caricature. Very involved in repositioning the Bond persona, he has a commanding presence. There is not one brush of pancake makeup on him.

Bardem nearly steps over Craig. He gives Silva a tint of gayness, or is he just trying to elicit homosexual panic in Bond? As a true sociopath, he can’t help slipping into crazy-speak. And his seeking “M’s” approval is another psychological trait he shares with Bond. 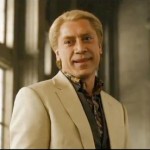 No other Bond villain has succeeded in all his goals like Silva does.

Mendes clearly adores Craig and regardless of not pandering to the sex symbol motif, there are a few setups where the pronounced gifts of Mr. Bond are cannily suggested.

The action scenes are brilliant and SKYFALL gives fans a huge amount of pleasure. It is rumored that SKYFALL’s third credited screenwriter John Logan (following Neal Purvis and Robert Wade) is already working solo on Bond 24.