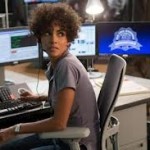 Thrilling, then it goes Hollywood stupid and then the best ending ever! Berry’s hair co-stars and chews the scenery.

Jordan Turner (Halle Berry) is a 911 operator in L.A. This 911 center is called “The Hive” and the degree of technological skill displayed is reassuring. Let’s hope L.A.’s “The Hive” is the norm.

Whichever operator picks up a 911 call is random and when Jordan gets a frightened teenager sobbing there is a prowler outside her house, Jordan attempts to help the girl as the man enters the house and follows her upstairs. Jordan speaks to the prowler but is unable to save the girl’s life. 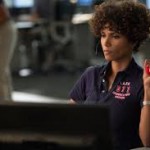 Jordan is guilt-ridden since she had promised to help the girl to safety. Returning to her job as an instructor, Jordan takes over when a new operator takes a call from a teenager, Casey (Abigail Breslin), being held in the trunk of a car.

Casey had been at the mall and abducted by a man, Richard Foster (Michael Eklund), we eventually get to know well. 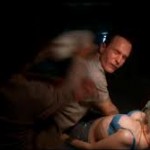 Jordan has some terrific strategies for Casey and most of them work until Alan Denado (Michael Imperioli) signals Foster off the road. White paint is streaming out of his trunk. Denado becomes suspicious but does not call 911. By this time, we are as terrified as Casey since Foster is freaking out. But Foster, who up until now seems to have been an ordinary husband and father, is totally losing it.

Being stopped and questioned forces Foster to act impulsively. We are as shocked as Casey as things unfold. 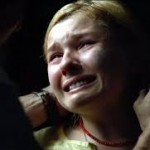 With Jordan at the helm and her boyfriend Paul Phillips (Morris Chestnut) a L.A. police officer, it seems that finding where Foster has taken Casey is going to happen due to technology. But then the screenplay goes stupid – or does it? Jordan then proceeds to do everything that stupid people do in horror movies. You know what I’m talking about: Like going down the basement stairs without putting on a light. Or when American girls think going to a Slovakian hostel sounds like fun.

Typically, when faced with a deranged, intestine-hurling killer, the next sacrificial victim throws the gun away deciding instead to use “harsh language”.* 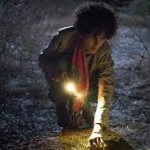 The third act takes Jordan directly into the action and she is dumb. Was she doing whippets in “The Hives” Quiet Room? This is where I say ‘she deserves whatever she gets’. I’m on the side of the killer now.

As the tension builds and Foster is in his own private Crazytown, we get caught up in the thriller and his reasons. And then the movie ends absolutely satisfying because Casey is no dummy.

Breslin has the tough role of being essentially a screaming, crying victim stuck in the truck of a car. Eklund is perfect, giving Foster an it’s-all-going-wrong sweating desperation.

Berry is absolutely engaging and emotionally present. Portraying an average, working black woman in L.A., I liked her lack of overdone hair and makeup. But her hairstyle wig is distracting. But I forgive her that. Berry is coming into a very creative period and THE CALL is quite the satisfying thriller.

Gorman: Apone! Look… we can’t have any firing in there. I, uh… I want you to collect magazines from everybody.
Hudson: Is he fuckin’ crazy?
Frost: What the hell are we supposed to use man? Harsh language?