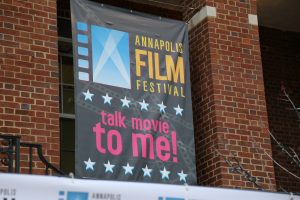 Over four days, beginning March 30 and ending April 2, the 2017 Annapolis Film Festival screened over 70 films, a mix of documentary and narrative, 32 of them features. I was only able to watch 7 of those full-length movies (and none of the shorts) – three documentaries and four narratives – including the opening-night film, director Rob Reiner’s latest, LBJ, two of the the producers of which, Tim and Trevor White, hail from Annapolis (their mother, producer Patti White, is actually the festival’s co-founder and director). It’s a very nice event, relatively low-key, located in a beautiful city that is home to the Naval Academy. I liked almost everything I saw, though I confess that the big film among my choices – Reiner’s – was my least favorite (though not without the occasional charm). Sadly, none of my chosen movies received audience awards; for features, those went to Breaking Point: The War for Democracy in Ukraine (documentary) and Burn Your Maps (narrative). What follows are capsule reviews of the films I did watch. Where I have previously written a full review for Hammer to Nail, the online magazine where I am lead film critic, I indicate such fact within the body of the text. Enjoy!

DOCUMENTARIES (in order of preference, though they were all strong)

1. The Islands and the Whales (Mike Day, 2016): the paragraph, below, is taken from a longer review I wrote for Hammer to Nail (which has yet to post, as of this writing)

From director Mike Day (The Guga Hunters of Ness) comes a work of visual anthropology that is as mesmerizing as it is disturbing. Set in the Faroe Islands, an archipelago in the North Atlantic that is part of Denmark (though self-governing), The Islands and the Whales explores the challenges of a culture forced to reexamine its long-standing whaling tradition in the face of global criticism and the very real dangers of mercury poisoning. To the diehard old-school fishermen, neither threat much matters, but to those with minds opened to the actual facts, the daunting task of convincing their fellow Faroese to alter ancient habits comes hard. So, most likely, did the making of this masterful film, shot in sometimes-difficult terrain, which presents a remarkably even-handed treatment of the arguments on both sides. Be forewarned, however: as in both The Cove and Blackfish, there is some very horrifying footage of cetacean hunting.

2. The Last Laugh (Ferne Pearlstein, 2016): the paragraph, below, is taken from a longer review I wrote for Hammer to Nail (which has yet to post, as of this writing)

No, Ferne Pearlstein’s latest film is not a remake of F.W. Murnau’s classic 1924 German masterpiece, but rather a documentary about the intersection of Jewish comedy and the Holocaust, and whether the practitioners of the former are allowed to use the latter as fodder. With such luminaries as Mel Brooks, Judy Gold, Gilbert Gottfried, Carl Reiner, his son Rob Reiner, Harry Shearer, Sarah Silverman and more, the movie takes us on a journey through the history of 20th-century Jewish humor and its role in helping Jews survive and thrive through difficult times. As the opening title card, using a quote by the German writer Heinrich Mann, declares, “Whosoever has cried enough, laughs.” Pearlstein (Sumo East and West) makes sure to include a discussion of the tragedy that then permits the comedy, embarking on a deep exploration of the freedom engendered by farce and satire.

Shot and directed by Maisie Crow, whose feature debut this is, Jackson bears a strong resemblance to Dawn Porter’s Trapped (released last year), since both documentaries focus on the ever-eroding access to abortion clinics in the United States, and therefore inevitably have overlapping subject matter, characters and locations. They are not alone, since other recent films like Abortion: Stories Women Tell and After Tiller tread similar ground. Crow’s film stays mostly in Mississippi, profiling the brave men and women who work at the last remaining women’s health clinic to continue providing abortions (as well as many other services) in that state. Some of them, including Willie Parker, are also featured in Porter’s movie. The state’s TRAP laws make it likely that this clinic, as well, will soon be forced to close. In contrast, the local “crisis pregnancy centers,” which exist to dissuade women from having abortions, even if they already have more children than they can reasonably handle, continue to proliferate. We meet the director of one of them, as well as a twentysomething mother of five who is pregnant again, and so are exposed to multiple points of view. My own beliefs may lie firmly on one side of the equation (go ahead and figure out which one), but I appreciate Crow’s insistence on including different perspectives. It’s a solid bit of filmmaking, though not particularly innovative in its cinematic approach. Perhaps I am just reaching fatigue on the topic (at the movies, but not in real life), which is no fault of the director.

NARRATIVES (in order of preference, though I liked the first two almost equally, and The Archer much more than LBJ)

1. Katie Says Goodbye (Wayne Roberts, 2016): the paragraph, below, is an adaptation of a longer review I wrote for Hammer to Nail (which has yet to post, as of this writing)

I have become skeptical, over the years, of films about prostitutes, concerned by the potential to romanticize the profession, but I am happy to report that Katie Says Goodbye, the first feature from writer/director Wayne Roberts, avoids any and all tendencies to sugarcoat the fate of its central heroine. Played by the luminous Olivia Cooke (Me and Earl and the Dying Girl), Katie is a desperate young woman living in a trailer park with her irresponsible mother, who turns tricks to not only make ends meet, but earn enough money to decamp to California, where she hopes to start anew. She’s a kind soul, ripe for exploitation, and Roberts explores the many ways in which her bad decisions gather awful momentum to deliver a near fatal knockout blow. It’s when Katie falls in love with a local mechanic that things start to unravel, as the attendant jealousy this provokes among the male population starts to simmer. What had been a carefully constructed world of known rules suddenly falls apart. What follows is not pretty. It is, however, wholly engaging, thanks to the brilliant Cooke, an able supporting cast, a smart script by Roberts, as well as his very fine direction. We’ve seen many “hookers with a heart of gold” stories before, but none like this, combining the harsh realism of a film like Theo Angelopoulos’ Landscape in the Mist with the yearning fabulism of Percy Adlon’s Bagdad Cafe, yet wholly its own unique creation.

2. AWOL (Deb Shoval, 2016): the paragraph, below, is an adaptation of a longer review I wrote for Hammer to Nail (which has yet to post, as of this writing)

For a film that is otherwise such a wonderful celebration of the sexual and emotional awakening of a young woman at a major crossroads in her life, it’s a shame that AWOL ends on such a bleak vision of the consequences of love. Lola Kirke (Gemini) plays Joey, who is just out of high school and spending her summer at a carnival scooping ice cream when she meets the older, married Rayna (Breeda Wool, Faith Duluth on Lifetime’s UnREAL), mother of two. Though Joey’s own mother would prefer that she spend time figuring out the next stage of her life, which will hopefully include a stint in the army, Joey prefers to devote her energies to pursuing Rayna, who gleefully reciprocates the interest, though not so much when her husband, Roy (Bill Sage, The Archer), is around. Where, exactly, do Rayna’s loyalties lie? On that hinges the entire third act of the film. Brisk, short (85 minutes!) and always engaging, AWOL follows Joey – portrayed with stirring intensity by Kirke – as she pursues the affair, for better and for worse. Directed by Deb Shoval, whose feature debut this is (adapted from a previous short of the same name, which also starred Breeda Wool), the film has a raw power marred only by the conveniently open-ended conclusion (sometimes that’s the dramatically easy way out), and promises even greater things from Shoval in the future.

3. The Archer (Valerie Weiss, 2017): the paragraph, below, is an adaptation of a longer review I wrote for Hammer to Nail

An engrossing, if sometimes silly, thriller that straddles the thin line between excitation and exploitation, The Archer announces, in the first title card, that it is “inspired by true events.” Maybe. We learn at the end the exact nature of the original source – excessive punishments handed down to juveniles in Pennsylvania – but until we get there, The Archer feels far more inspired by the legion of “women in prison” films that have preceded it, as well as by the more contemporary Netflix show Orange Is the New Black. There’s nothing wrong with honoring these influences, and director Valerie Weiss (A Light Beneath Their Feet), working from a script by Casey Schroen, mostly succeeds in creating an adrenaline-fueled, violent romp in which a strong and vibrant young woman turns the tables on her male oppressors, finding love – in the person of one of her fellow prisoners – along the way. Like the mythical Diana (and as the title promises), our heroine is good with a bow, so expect much shooting of arrows and piercing of flesh. In other words, a good time. It’s unfortunate that all the male characters are one-dimensional, but otherwise this is an extremely watchable action movie with a great central performance from Bailey Noble (Adilyn Bellefleur on HBO’s True Blood), who brings powerful physical and emotional intensity to her part.

Rob Reiner’s last film, which I opted not to review, was Being Charlie, based on his own son’s problems with addiction (and co-written by that son). It was a deeply flawed, at times near-unwatchable misfire, though with its heart in the right place. I have loved many films by Reiner – including This Is Spinal Tap, Stand by Me, The Princess Bride, When Harry Met Sally and The American President – but after that last one, made in 1995, Reiner’s track record has, for me, been spotty. He returns, with his latest, LBJ, to the realm of the political, offering up Woody Harrelson (Wilson) as Lyndon Baines Johnson, our 36th President, as he takes over the executive office in the weeks after his predecessor’s assassination. Harrelson looks nothing like the part, and so is subjected to pounds of prosthetics and make-up, as is Jennifer Jason Leigh (The Hateful Eight) as Lady Bird, his wife; he comes out all right (thought still nothing like the real deal), but poor Leigh ends up resembling Margaret Hamilton as the Wicked Witch of the West in The Wizard of Oz. It probably would have been best to let them be as they are and allow the performances to sell the roles. So be it. The film, itself, is very watchable, if soggy and with each big beat unfortunately underlined with music by composer Marc Shaiman (And So It Goes). We get a sense of Johnson the man and Johnson the politician, but not enough of the latter, given what important work he did in his time. An overly sentimental, lightweight affair, it should offend no one’s sensibilities, but it never does much to justify its existence, either.

And that’s it for my report. I’ll be back next year, hoping to see at least as many films, and with every expectation that most of them will be exceptionally strong, as were most of the above. Perhaps you’ll join me?