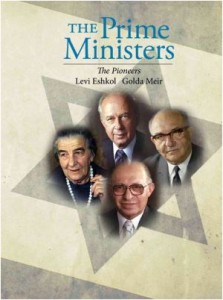 The  New York premier of THE PRIME MINISTERS  on May 7, 2013 was introduced with a brief video salutation by the Israeli prime minister Benjamin Netanyahu and comments by Yehuda Avner.  Avner is the author of the bestselling book The Prime Ministers on which the documentary is based. Yehuda Avner joined the Israeli Foreign Service in 1958 and served as an advisor to the Israeli Prime ministers Eshkol, Meir, Rabin, Begin and Peres. Entitled THE PIONEERS, the first part of the documentary was shown focusing on Levi Eshkol and Golda Meir. The documentary will conclude with part two, THE SOLDIER AND THE SCHOLAR focusing on Yitzak Rabin and Menachem Begin to be released in late 2013. As some speakers pointed out before the screening, release of the documentary is perfectly timed since Israel is under attack again, the political situation in the Middle East is most unstable, and there are persistent attempts to de-legitimate Israel.

Yehuda Avner provided a running commentary throughout the film which was directed by Rick Trank with Sandra Bullock, Michael Douglas and Leonard Nimoy providing voices for Golda Meir, Yitzhak Rabin, and Levi Eshkol.  The Pioneers provides rarely shown archival footage from the founding days of Israel and the subsequent period up to the aftermath Yom Kippur war, interspersed with the Avner’s personal observations and anecdotes.  This personal touch made the narrative more accessible to the audience.  Behind the scenes details of the wars and of relations with the US otherwise not available makes this documentary rather attractive.  The establishment of a save heaven for all Jews in Israel, rendering the notion of Jewish refugees obsolete was the driving motivation shared by Avner and politicians from all parties from the very beginning.

Avner relays how a reluctant President Truman who refused to see any Zionists met Chaim Weizmann as   urged by his close Jewish friend Eddie Jacobson and was convinced to agree to the partition of Palestine and to recognize the state Israel. Truman advised the UN accordingly, though the department of state was opposed to his new policy.  As the US was instrumental in getting the state of Israel recognized so were US arms and financial crucial for Israel’s successful 1967 blitzkrieg against Arab countries.   Prompted by Syria’s attempt to divert water from Israel and by Egypt’s introduction of poison gas in the Sinai, Israel engaged in pre-emptive military strikes and prevailed in the Six Day War over the Arab forces. Before Israel started the war the special envoy Golda Meir had assured Jordan’s King Abdullah that his country would not lose any territory if it stayed neutral. Jordan refused. As a result, Israeli paratroopers captured the old city. All holy sites were for the first time since 13 AD in the hand of the Jewish people. Israel offered to return all occupied lands if Arab countries recognize Israel which was refused by Arab countries.

THE PIONEERS presents many inside stories such as President Johnson and Prime Minister Eshkol, a former kibbuznik, taking care of cattle on LBJ’s farm.  Eshkol succeeded in this visit in getting armaments and financial support from the United States because the Soviet Union’s was rapidly building up the armed forces of Syria and Egypt. But Johnson was also swayed by the argument that “the survival of 2.5 million Jews in a sea of hostile Arabs had to be assured”.  This was the beginning of the strategic alliance between USA and Israel.

Golda Meir was elected by the labor party as new prime minster in 1969. As in his portrait of Levi Eshkol and Ambassador Yitzhak Rabin, Yehuda Avner provides a superb characterization of Golda Meir personality as shaped by her Kibbutz experience and struggle as a Zionist. She is described as being very warm but also as “a person who could bite bullets”.  Meir’s encounter with Israeli soldiers in the valley of tears in Golan Heights during the Yom Kippur war shows her emotional side.  But her response to the growing terrorist threat was firm, never to negotiate with terrorists and kill them for their acts. None of those involved in the murder of Israeli athletes in Munich survived the Mosad.  An anecdote relayed by Avner shows her position. The Austrian government under the leadership of Kreisky who is Jewish agreed in 1973 to close down the  Schoenau  transit Center used by Jews  travelling from  the Soviet Union to Israel, a step taken to secure release of some Jewish hostages held by Syrian terrorists.  Meir had support from the European Council and confronted Kreisky in Vienna. In the acrimonious encounter he did not shake her hand nor offer her a glass of water, arguing that he would not sacrifice the safety of Austria for the Jewish state.  She maintained her firm position during the Yom Kippur war when Israel’s nightmare of being taken by surprise came true and Israel faced the most dangerous moment in her history.  When Israel’s armaments were rapidly depleted under the Arab attacks she secured replenishment from the United States in massive airlifts.  According to the documentary European powers refused to allow refueling of US planes on their grounds for fear of endangering their oil supply from Saudi Arabia.

THE PRIME MINISTERS provides a very sympathetic view of Israel’s history and problems and will be useful as an instructional tool given the new information it contains and its high production value.  As an instrument of public diplomacy it can be aimed at Jewish and other interested communities.  The reaction of the audience during the New York premiere indicated that for some the documentary was too long and too emotional and should have been  more focused on essential elements. The film has been produced by the Simon Wiesenthal Center’s Moriah Films division which will also be distributing it. It was funded in large part by the U.S. Department of State’s Office of Holocaust Issues but also derived support from numerous other sources.