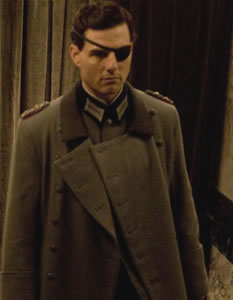 Both director Bryan Singer and star Tom Cruise have described “Valkyrie” as an adventure thriller. So that’s what they had in mind—which is understandable since Cruise has established himself as an actor who can drive such films—but they should have pushed the notion aside. Maybe Singer can’t help but make a film full of elaborately uniformed heroes and villains; after all he effectively launched the X-Men franchise and re-imagined Superman (albeit in the none-too-successful “Superman Returns”).

With reasonable diligence and relative accuracy, “Valkyrie” tells the complex story of Colonel Claus Philipp Maria Schenk Graf von Stauffenberg, who attempts to assassinate Adolf Hitler and, with his band of co-conspirators, take over the crumbling Third Reich before the Allies force an unconditional surrender on his homeland. Stauffenberg was an aristocrat, an active soldier, and an unrepentant nationalist who believed in the greater glory of the German people.

A devout Catholic, he was appalled by the Nazis’ brutality and lack of honor. With other aristocrats and conservative Catholics (played by Branagh, Nighy, Stamp, Parker, and Izzard, among others), he joined a resistance movement that plotted to kill Hitler and remove the fanatic Nazis from power while still believing in a German “victory.” By July 20, 1944, the day of this final attempt against Hitler, a surrender to the Allies was still possible that would have allowed Teutonic dignity to remain intact.

As the film unfolds, the conspirators become increasingly desperate, since earlier attempts to kill Hitler failed and the war has taken a decidedly dismal turn. Stauffenberg, who had been terribly wounded by an Allied attack in North Africa (he lost an eye, a hand and most of the fingers on his other hand), is sent to a Munich hospital to recover. The resistance engages Stauffenberg to join them, and he goes from discouraged conspirator (he has little faith in the civilian plotters) to key organizer who must both kill Hitler and initiate the coup that gets the regular Army to suppress the Nazi cadres of the SS and Gestapo (“Operation Valkyrie”). Fortunately, he has risen in rank to Colonel, has been transferred to Berlin and becomes part of the general staff that gives him access to Hitler.

This tale becomes richly compelling as the audience gets to know who the players are. As we learn about the various plotters’ motives, we see the attempt unfold and ultimately fail. Though Singer accelerates its thriller pace, “Valkyrie” reveals a lot about the striations and counterforces in German society that led to the Nazis’ takeover and their iron-fisted control of the country. As the historical facts of the July 20th coup emerge, we see the complex dynamics behind the scenes which suggest that the German Third Reich was far from a coherent juggernaut, but a careening mess of madness and compliance. Unfortunately “Valkyrie” breezes along without enough moments of digression to illuminate the various factions involved and the failures of character that caused this plot to fail.

Though an excellent crew of international actors—such as Brits Nighy, Wilkinson, Euro-actors Kretschmann, and van Houten—round out the cast, they play their parts in disconcerting English accents. Nonetheless, the supporting characters provide a rich foundation to nurture Cruise’s Stauffenberg as de-facto coup leader.

Even though Cruise dominates throughout, Singer assembles the film from a kaleidoscopic bunch of set pieces that speed up into the failed coup and the conspirators’ executions. While the diminutive Cruise gives Stauffenberg a large presence, he performs the character with greater restraint and poise than he has shown in the past. Though his very Americanness sometimes gets hard to overlook, Cruise manages a fine performance.

Having recently viewed a much younger Cruise in “Jerry Maguire” one could see the making of the superstar. With an abundant energy and passion, Cruise imprinted on his character both an edge and vulnerability, like a loving kid with attention-deficit disorder. But the Cruise of “Valkyrie” is all about control, and though his mania seethes underneath the surface, he effectively manages it as Stauffenberg makes his bid to determine Germany’s destiny.

The script tries to seed the film with the rich historical, cultural, and political realities of the time among a field of ever-intensifying action. But while Singer nearly overwhelms with the powerful imagery of Nazi culture—the elaborate military uniforms, endless Swaistka-laden flags and banners or imposing architecture—he sacrifices background for the drama, occasionally diminishing the importance of the story.

One can only begin to appreciate “Valkyrie” by getting past preconceptions of Tom Cruise in an eyepatch and Nazi regalia or the baggage of his “Oprah” appearances. And if you can get past the polyglot of accented English or the scuttlebutt about the film finding an appropriate release date, then “Valkyrie” is both suspenseful and enlightening. It goes far beyond the cliche that pits “heroic/good Nazis” against the “bad” fanatics who supported Hitler, but rather reveals the intricate and daunting dynamics the led to the rise and fall of the Third Reich.