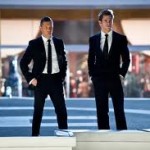 Tom Hardy in a rom-com? What’s next? Michael Fassbender trying to win the heart of coma-stricken, dog-walker Jennifer Aniston?

FDR Foster (Chris Pine) and Tuck (Tom Hardy) are two undercover CIA agents recently demoted from Ethan Hunt’s MI team for letting their romance get in the way of killing bad guys. They have constant spats while throwing bad guys off roofs!

Lauren (Reese Witherspoon) is gorgeous, successful, kind, and exquisitely toned and put-together. She has no flaws. Yet, she can’t find and keep a man. 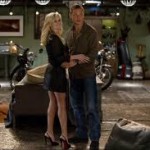 What is wrong with her? Is Lauren hiding a childhood trauma that makes her manic-depressive? Is she an afternoon drunk?

We are introduced to blazing blue-eyed FDR and blazing blue-eyed, though much shorter, Tuck in Hong Kong where they are working an undercover operation. They are attempting to capture handsome criminal Heinrich (Til Schweiger) but it goes terribly wrong. Their boss Collins (Angela Bassett) gives them a “time out”.

Tuck, who is not gay and has a 7-year old son, wants a relationship. FDR, who is not gay, is a hound. Both men live in extravagant apartments which telegraphs they are really in cohoots with Heinrich. FDR’s apartment ceiling has a pool. I’d love to watch FDR when old Asian women take to the pool. That’s all I see at my club’s pool. 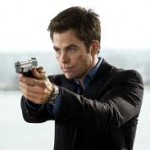 Tuck joins an online dating club and finds Lauren’s profile. Lauren’s best friend, harried comic relief Trish (Chelsea Handler) has posted a ton of cute photos of her. Lauren likes Tuck’s profile – a faux-travel agent – and meets him for a drink. After the drink, she runs right into shark FDR at a video store! How 90s of them! Its “meeting Hollywood cute”. Reprising the now-classic CASINO ROYALE verbal play, Lauren sizes FDR right up. He’s clearly not for her. So, after years of living in a sexual tundra, Lauren now has 2 potential husbands!

And Lauren has blazing blue-eyes. 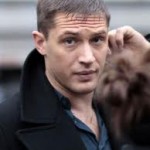 When FDR and Tuck discover they are both pursuing Lauren, they decide to use their team of CIA trackers and government-issued listening and visual tracking devices to stalk Lauren. What about arch-criminal Heinrich? Damn that guy keeps cropping up!

Dinner and a movie? That was so yesterday! For his first date, Tuck rents out a Cirque du Soliel school so he and Lauren can have a private trapeze session. Seeing that Lauren has a Klimt poster on a wall in her house, FDR takes her to see Klimt masterpieces in a museum’s basement. Second date goes even further after hearing Lauren critique the dates.

It gets worse as FDR and Tuck attempt to seduce each other using Lauren as their stand-in.

Which man will Lauren choose? Playboy FDR or sincere Tuck? This frigid romantic comedy paints itself right into a corner. Which movie star gets dumped?

Because this is the real world and all three are 30-years old, they are forced to introduce sex into the plot. Too bad THIS MEANS WAR screenwriters Timothy Dowling and Simon Kinberg did not see the BRIDESMAIDS era coming. They never saw THE HANGOVER.

Forced to nod to the morals of today’s women, Witherspoon is pushed into “testing driving” the men by Trish. She has to have sex with both of them as the final exam.

Guess who says “Cover me. I’m going in.”

Witherspoon is not ready to give up her title to Emma Stone just yet. But this role is absolutely ridiculous. Who can relate to a woman like Lauren not dating? And FDR and Tuck? When Heinrich spots them in Hong Kong he follows them to the U.S.! Which one will he choose? 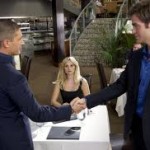 I don’t want to see Will Ferrell pursuing Lauren, but can’t any of these characters have a flaw that makes their lonely, empty romantic lives believable?

Why did Tuck break up with his baby mama?

Pine has the more difficult role and he never succeeds in making his prowling FDR likeable. FDR is absolutely not the right option for Lauren, even if his parents died when he was 8 years old and he had to raise his younger brothers and sisters on a dairy farm.

Witherspoon makes a few cute faces and has been given the best lighting. She looks twenty and glows. Her career will survive THIS MEANS WAR.

And what about Hardy? After his spectacular previous films, this is a disappointment. He’s “gone Hollywood”. I hoped he would take over for Jason Bourne. But, he is very likeable and cute here and has an easy way with comedy. “Going Hollywood Rom-Com” did not go well for Gerard Butler (co-starring first with Katherine Heigl and then Jennifer Aniston).

Tom, stay away from the light – it’s a Hollywood bulb.

Director McG does a terrible job. Was he even on the set? The action sequences are clumsy and the romantic scenes embarrassing. And the production? A big fight scene in a restaurant clears it out. No one is standing around filming it on their cell phones? The staff high-tails it out as if they were on the Costa Concordia.