Before launching into my review of director Penny Lane’s latest work of evocative nonfiction, I must come clean: I do not like, in any way at all, the music of Kenny G (né Kenneth Gorelick). Though he has his legions of followers (a fact which mystifies me), when I think of him, I think of shopping malls, doctor’s offices, massage-therapy rooms, and any other place where one is meant to be soothed, rather than stimulated. I am by no means the only person who feels this way, which is what makes Listening to Kenny G (as opposed to actually “listening to Kenny G”) so fascinating. In the documentary, Lane (Hail Satan?) pursues more than just a profile of her titular subject (though she does that, as well), providing a robust examination of musical taste and what it means to love something that others don’t, or even to be the person whom just as many people hate as adore. Wherever one stands, this film proves an enjoyable watch.

Mr. Gorelick, himself, is front and center, driving the narrative through his own recollections. His interview is supported by copious additional voices, many of whom are music critics who feel the same about him as do I. Some of them, however, nevertheless take the time to ponder the mystery of Gorelick’s success. As with all such portraits, the history of the rise to fame and fortune, when expertly told, is extremely engaging. And Gorelick, whatever my opinion of his music, makes a very affable protagonist, seemingly ageless and as driven as ever. He recognizes that his heyday (the 1980s and ‘90s) is deep in the past, yet he keeps composing, recording, and performing, looking ahead rather than backwards. His melodies may sound tired (to me), yet his work ethic is a model of boundless energy. After all, he is the best-selling instrumentalist of all time. That takes effort, for sure.

Gorelick started out in Seattle, where his talents on the saxophone drew the attention of his high-school music teacher, James Gardiner (here interviewed), who got him early gigs that would propel him forward. By the early 1980s, he was under contract at Arista Records, where the legendary Clive Davis (also interviewed) and his team had trouble positioning him. No one thought that anybody would want to buy, in big numbers, albums from someone who was only an instrumentalist, so he was paired with singers and others to middling results. Until, that is, his big break, with his original 1986 “Songbird,” which, according to Gorelick, he played on Johnny Carson’s The Tonight Show in lieu of the piece he was supposed to perform. Supposedly, the wife of an Arista executive heard it, told her husband that that was the kind of music she wanted to hear; he then approached Davis and they switched marketing strategies to push that song. It went high on the charts, and that was it. Kenny G was a star.

Today, he looks back with pride at his many accomplishments, including the fact that countless people around the globe have both gotten married and conceived children to his music. That is, indeed, quite something, and even those critics who despise his output marvel at that particular achievement. Less appealing to them are the twin genres he inspired of “smooth jazz” and “easy listening.” But as Lane so wonderfully exposes, it doesn’t matter why or how Kenny G speaks to millions; the fact that he brings pleasure is enough. Leave them, and him, be. 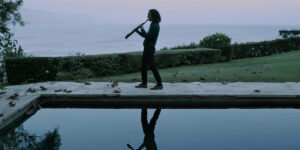 Still, there is the question of appropriation, which NYU’s Jason King (a writer and professor of music and media) perhaps best articulates here. Once again, as with early rock & roll, a white artist’s celebrity has come on the heels of many Black artist’s previous efforts. Kenny G accepts some of this, but still thinks he earned his success. And King is by no means anti-Kenny G (in fact, he is one of the kinder interviewees), but as with all good academics, he wants to contextualize the narrative, and the film is stronger for it.

By the end, even a hater like me has come to appreciate Kenny G for what he has brought to his fans. And as always, I appreciate Penny Lane. Her movies sparkle with life and good humor, taking complex arguments and making them easier to understand. Kenny G is fortunate she found him, for in her movie he gets the best treatment possible: critical, but fair. We should all be so lucky. But please, don’t ever make me listen to any more of his tunes, I beg you.