Two spitting scenes in 3D and Jack Dawson loses his virginity. A second look indicates a cruel streak in the modern epic. 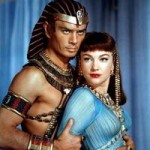 What’s next? BEN HUR in 3D? How about THE TEN COMMANDMENTS? It’s got all those Egyptians drowning in the Red Sea.  And it has that infamous femme fatale Anne Baxter as vampy Nefretri hilariously moaning: “Oh, Moses, Moses, why of all men did I fall in love with a prince of fools?”

Why the need for TITANIC 3D? Did Cameron need the money? Were DiCaprio and Winslet’s agents shrewd enough to consider a re-release pay clause in their contracts? Did Cameron just do it because he could? Regardless of the financial reasons, the money put into TITANIC 3D is on the screen in an impressive way – Cameron has shown that a 3D conversion – TITANIC’s conversion is said to have cost $18 million – done properly, can work.

A recap: TITANIC, released in 1997, was Hollywood’s costliest production ($200 million) and became the top-grossing movie in history at $1.8 billion and it won a record-tying 11 Oscars, including Best Picture and Best Director.

What follows is a quick summary of the plot (no spoilers!) with my highly individualistic interpretation. The R.M.S. Titanic was primarily a ship celebrating the division of the classes: Brahmin aristocrats for whom the great ocean liner was built, and the “untouchables” – the men and women who worked on the ship, as well as the Third Class (steerage) passengers. Each had their own part of the ship – but only one man was able to cross over the divide – 19 year old, footloose and

fancy free American Jack Hawkins (Leonardo DiCaprio), who, in a game of cards, won two tickets back home on the great ship for him and his buddy Fabrizio. 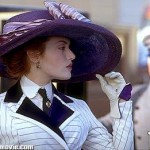 Ruth once again reminds her that they are destitute and in great debt due to her father’s reckless behavior. To save them from a life of social banishment and poverty, Rose must marry Cal.

I recently watched Titanic: The Final Word With James Cameron on the National Geographic Channel. Cameron’s final words – we all know he’s a powerful multi-millionaire – was scripted by Karl Marx!

Rose resents her mapped-out privileged future, hates her mother, and cares not a twit about her dead father’s debts. Her mother can sell matches on a street in New York for all she cares.

So how wealthy is Cal? He bestows on Rose a priceless blue diamond once owned by a king. Callous and cruel but with impeccable manners, Cal represents the society both he and Rose grew up in. Yet, Rose wants no part of high-class society. She longs to take off and go backpacking across Europe. She envies the poor. 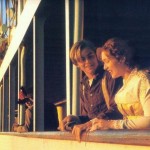 Jack saves Rose from her suicide attempt and they begin a shipboard romance-of-the-heart. Jack teaches Rose how to spit into the wind. They practice. Rose becomes good at it.

Imagine meeting someone who wanted to teach you how to poop in your pants. Same difference. 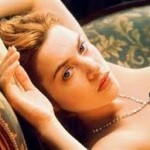 Jack is an artist and shows Rose his nude drawings of Paris women. He is obviously a man who has seen a thing or to. Or has he? Rose certainly is no virgin, since Cal questions why she hasn’t visited his room one night. When Rose asks Jack to draw her only wearing the necklace and unrobes confidently and seductively in front of him, Jack blushes and becomes flustered like he never saw a naked woman before!

Cal has his “aide-de-camp” hunt Rose all over the ship, constantly finding her in Jack’s company. As the film moves towards the iceberg, Cal loses his temper with Rose and slaps her. She spits in his face.

It’s the ultimate humiliation – to be spat on. However, it has evolved and now is a popular, corrupt fetish in pornography. Remember when Thomas Jane spat in Angelina Jolie’s mouth in ORIGINAL SIN (2001)?

Spitting upon another person, especially onto the face, is a universal sign of anger, hatred, disrespect or contempt. It can represent a “symbolical regurgitation” an act of intentional contamination. However, in my work in South America with ayahuascaqueros, the shaman’s spit is often drank as a means of transferring power. However, this is not what director/writer James Cameron had in mind.

Cal is a pompous caricature of a moustache twirling Simon Legree who refuses to let Rose go. She is a jewel in his world and he is not going to let a homeless young man win her.

Jack and Rose’s love for each other is finally consummated in a magnificent car in the ship’s cargo bay. At the culmination of the sex act, Jack starts shivering and Rose holds him gently to her breast. She strokes his hair and asks him if he is all right. Rose says: “You’re shivering”. Clearly, it was his first time.

Wait one second! Jack Dawson was a virgin?

Why in the world did Cameron choose that take? It squashes the dynamic passion of their iconic love story reducing it to whimsical puppy love. Imagine Clark Gable shivering after bedding Scarlett O’Hara!

And from then on it is Rose who takes over the heroic lead. Rose is clearly Cameron’s stand-in. Cameron starts to dismiss Jack and his choices from this point forward prove my point. Cameron emasculates Jack. It is the power of the director to shape a performance. They may have done the love scene ten different ways, but Cameron chose the whimpering one.

Now, let’s blame the sinking on the moon. An ultra-rare alignment of the sun, the full moon, and Earth, may have set the April 14, 1912 tragedy in motion, a new report suggests. R.M.S. Titanic went down on a moonless night, but the iceberg that sank the luxury liner may have been launched in part by a full moon that occurred three and a half months earlier, scientists say. That full moon, on January 4, 1912, may have created unusually strong tides that sent a flotilla of icebergs southward—just in time for Titanic’s maiden voyage, said astronomer Donald Olson of Texas State University-San Marcos.

The love triangle is a fine build-up and Cameron clearly feeds our resentment of the First Class passengers by luxuriating in their arrogant entitlement, knowing many of them will die without their jewelry and priceless possessions.

As the signal for the iceberg is given, TITANIC 3D takes off in a spectacular fashion. Yes, 3D was created for epics like TITANIC not for MY DINNER WITH ANDRE.

Can you applaud a hero who doesn’t save his own life? Why did Jack sacrifice himself so Rose could live? Have we neglected the messianic feature of TITANIC instead seeing it as a tragic love story?

Another complaint on second viewing is the journey of that priceless necklace. As an old lady reliving her experience on the Titanic, heavily-wrinkled Rose (Gloria Stuart) is told that ruthless Cal – who made sure he got on a woman-and-children-first lifeboat – put in an insurance claim on the necklace. We don’t know what happened to Rose’s mother but Rose went on to have a happy life with a husband, children and a devoted 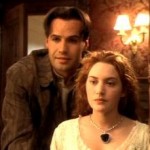 granddaughter (Suzy Amis). She kept the necklace in her pocket her whole life!

Shouldn’t Rose have given the necklace back to Cal or used it to provide for her mother and redeem her father’s reputation? Hey, how about donating it to the families of those 1,517 who died on the Titanic?

Leonardo DiCaprio was not at any of the premieres for the new 3D version of TITANIC. Why the snub?

The sinking of the ship in 3D is glorious. It is certainly worth the price of a 3D ticket and Cameron has delivered – as he promised at CinemaCon 2011 – to bring a high quality stereoscopic 3D film from a 2D source. 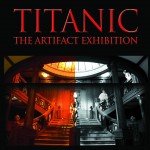 Here in Las Vegas is the most fantastic exhibit, Titanic: The Artifact Exhibition permanently housed at the Luxor Hotel and Casino. I’ve seen it several times and it is brilliant – it’s a journey that begins pleasantly enough until the specter an iceberg looms.

Titanic: The Artifact Exhibition showcases authentic artifacts recovered from two and one-half miles below the surface of the North Atlantic. Unique to the Exhibition at Luxor Hotel & Casino is the crown jewel of artifacts, a 15-ton section of the Titanic’s starboard hull, appropriately called the ‘Big Piece.’ There are more than 20 never-before-seen artifacts. Reproduced are the decks, the famed Grand Staircase, cabins and information about the passengers and crew. This 25,000 square foot exhibition is a stunning, and highly dramatic, exhibition. 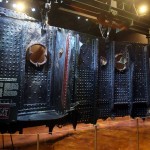 Titanic: The Artifact Exhibition commemorated the Centennial of RMS Titanic’s launch and eventual sinking on April 10 with a special candlelit vigil at Luxor Hotel and Casino. A Titanic descendant and 185 Griffith Elementary School students took part in the ceremony dedicated to remembering those who lost their lives on RMS Titanic.

Tickets prices for Titanic: The Artifact Exhibition are $27 for adults, $25 for seniors, $20 for children 14 years of age and younger, and $24 for Nevada residents and Luxor hotel guests. Hours of operation are 10 a.m. to 10 p.m. with last admission at 9 p.m. www.Luxor.com.

Victoria Alexander is a member of the Broadcast Film Critics Association: www.bfca.org/ and the Las Vegas Film Critics Society: www.lvfcs.org/. Victoria’s weekly column, “The Devil’s Hammer,” is posted every Monday. http://www.fromthebalcony.com/editorials.php. If you would like to be included on Victoria’s private distribution list for a weekly preview, just email her at masauu@aol.com.

Victoria lives in Las Vegas, Nevada and answers every email. You can contact Victoria directly at masauu@aol.com.