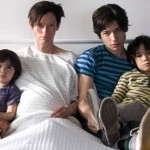 WE NEED TO TALK ABOUT KEVIN is riveting, frightening, and hard to forget. Tilda Swinton is emotionally raw. It is a breathtaking performance. The 2 boys who play Kevin as a toddler (Rock Duer) and as a 6-8 year old (Jasper Newell) are fantastic – where do they find these children?

Then there is Ezra Miller as Kevin as a teen. He is seductively terrifying. 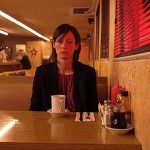 Eva (Swinton) has been emotionally made empty. Her teen son Kevin went on a well-planned and executed high school killing rampage. Forced to still live in the community shattered by the massacre so she can visit Kevin in jail, she is a pariah.

The question of guilt – are the parents guilty when their children turn into serial killers? Should we blame them? Six months after the Columbine Massacre, polls showed 85 percent of Americans held the parents responsible for the shooters’ acts. 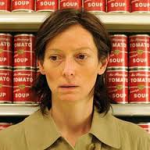 Eva leads a solitary life in a small run-down house. Like Joyce Flint after Dahmer’s arrest, no one will hire Eva. Finally she lands a job in a travel agency, but her co-workers refuse to even look at her. As Eva relives everything that happened, we go back through her horrifying ordeal to the beginning.

Eva was a free spirit travelling around the world in a hippie idealistic way. She married Franklin (John C. Reilly) and they moved into a New York City downtown loft. In a foreshadowing of what will come, having a child does not look to be a joyous event for Eva. We see her in the hospital room immediately after the birth. She is frozen. She is empty of feeling. 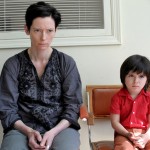 Eva cannot bond with her baby. He cries constantly. Eva can offer the baby no comfort. Kevin exhausts her with his crying.

“Mommy was happy before Kevin came along.”

It all seems to begin or end with Mother. “Serial murderers are frequently found to have unusual or unnatural relationships with their mothers,” notes Steven Egger in his book The Killers Among Us. 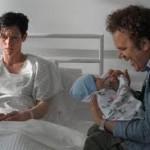 Eva and Franklin move to a large suburban house with Kevin. Eva stays home trying to teach the toddler, who refuses to speak.

Kevin does not wear pants, only a diaper. He refuses to be toilet trained as he becomes older. He delights in making his mother change his feces-soiled diapers. He is cruel and verbally abusive to Eva and destroys her “room of her own” that she has lovingly decorated. In a fury, she pushes him, injuring his arm. At the hospital, Kevin lies for his mother. Now, whenever he wants something, he strokes his arm. He’s got Eva guilt-ridden and frightened.

Kevin forms a loving bond with his father to spite his mother.

The Macdonald triad (also known as the triad of sociopathy), first identified by J.M. Macdonald in 1963, is a set of three behavioral characteristics that are associated with sociopathic behavior. The triad links animal cruelty (A disturbing red flag. Animals are often seen as “practice” for killing humans.), obsession with fire setting (Pyromania is often sexually stimulating. The dramatic destruction of property feeds the same perverse need to destroy another human), and finally, persistent bedwetting past the age of five to violent behaviors, particularly homicidal behavior. Bed Witting is the most intimate of these “triad” symptoms, and is less likely to be willfully divulged. By some estimates, 60% of multiple murderers wet their beds past adolescence.

Kenneth Bianchi, The Hillside Strangler, was a child loner, with many problems. One clinical report said that “the boy drips urine in his pants, doesn’t make friends very easily and has twitches. The other children make fun of him.”

Kevin is dangerous. So why in the world does Eva get pregnant again? I was afraid Kevin would drop his baby sister Celia (Ashley Gerasimovich) or harm her in some way.

When Kevin becomes a teen, his sport of choice, encouraged by his father, is archery. He has become a very good archer. It is possibly a risky sport that neither parent considers.

Eva and Franklin need to talk about Kevin. But they never do. 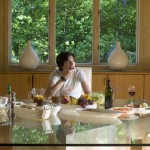 Kevin’s killing spree – as horrific as it is – is solely meant to destroy his mother’s life. Even though he is incarcerated, he is the winner. He left his mother alive intentionally so she would suffer.

Parents know their children. Children with problems want their parents to know. They hid nothing. Why should they?

Should we blame the parents? Yes, because they saw all the signs and looked the other way.

On Tuesday, April 20, 1999, at two Columbine High School senior students, Eric Harris and Dylan Klebold, embarked on a massacre, killing 12 students and 1 teacher. They also injured 21 other students directly, and three people were injured while attempting to escape. The pair then committed suicide. The Harris and Klebold families have not spoken publicly about what they did or didn’t know leading up to Columbine.

Dylan was depressed. His parents knew this, though not the extent of it. And it wasn’t because they weren’t around. Dylan’s father worked from home and saw his son every day. Wasn’t his father at all curious about what he was up to?

Eric was troubled and his parents were well aware of it. He broke into a van, he was found making pipe bombs and setting them off for fun — and they took steps to address this. He was enrolled in a program for juvenile offenders, he was taken to a psychiatrist and given both therapy and medication.

But they were not watching Eric closely enough, were they?

Swinton’s performance is outstanding. Her face expresses Eva’s abject misery. She has lost her body. Her clothes hang on her. She is numb as she drags herself through life, living only to see Kevin during visiting hours. They sit motionless across from each other. 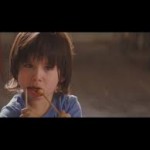 Lynne Ramsay has delivered a very troubling movie. Ramsay’s skill as a director brings a real dread to the story. Her handling of “the young Kevins” is masterful. Ramsay and co-screenwriter Rory Stewart Kinnear adapted Lionel Shrivers 2003 novel.

Swinton’s stark gaunt appearance aids dramatically in expressing Eva’s state of mind. Swinton has given an Academy Award performance and clearly challenges the performances of Glenn Close in ALBERT NOBBS and Meryl Streep in THE IRON LADY.

Considering so many films use child actors, an Academy Award should honor one child under 8 years old for recognition. 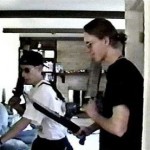 Beginning March 15, 1999, Eric Harris and Dylan Klebold made a series of videotapes specifically addressing the attack they planned, and expressing their reasons. Known as The Basement Tapes, since filmed in Eric’s basement bedroom, as of 2010 the tapes have never been released, or leaked, even in part.

In the farewell video Eric left for his parents, he quoted Shakespeare:  “Good wombs have borne bad sons.”