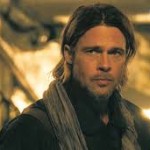 A social scientist might look at the global moviegoer’s appetite for movies based on superhero comic books, graphic novels, and YA novels, and conclude that humans are dissatisfied with the slow pace of their evolution. It seems a significant percentage of humans want superpowers, even if they will be called “mutants” or must drink the blood of other people. If you have to live as half-human and half-animal but with superpowers, so be it. 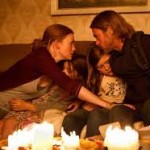 If we can’t have superpowers or have suits that will give us superpowers, then the next best thing is to survive a nasty, fast-moving plague while the dim-witted peasantry falls prey.

With AIDS taking millions of lives over two decades, no one can definitively say how it began. Sex with monkeys? That was dismissed as pure ignorance. Did you know that female orangutans are being used as sex slaves in Boreno? Men line up to have sex with orangutans. They are very popular and real earners. Pony the Prostitute was rescued by the World Orangutan Foundation and a friend of mine, who volunteers at a center in Borneo, visits her every year. In December 2012 Germany finally banned sex with animals amid a significant rise in the practice, with disturbing reports of the increasing popularity of “erotic zoos” where people (known as zoophiles) can have sex with animals including llamas and goats. Beginning January 1, 2014, sex with animals will be illegal in Sweden. 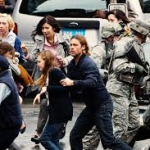 With the top six football stadiums in the U.S. holding over 100,000 people, a fast moving virus or a plague would be a perfect Ground Zero.

If Gerry Lane (Brad Pitt), a former United Nations infectious disease researcher, asked me, I would tell him to start at the Rungrado May Day Stadium in North Korea. It holds the top spot for stadium capacity and if any pox would move as fast as the one the world faces in WORLD WAR Z, this is where to look.

Gerry goes to South Korea instead. 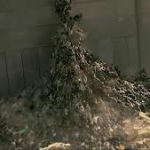 Gerry is one happy family man with an understated lovely wife, Karin (Mireille Enos), and two young daughters (Sterling Jerins and Abigail Hargrove). Like all children in movies, the older one does not obey her parents. In real life this means things like “Don’t run into the store”; in movies it’s “Don’t open our security system on Purge Night to anyone or we all will be slaughtered by the mob outside.”

A virus has a purpose: To spread. The problem with zombie movies is: Where is the villain for a finale with the hero? If the zombies are like a “hive”, where is the Queen Bee? What is the zombie agenda? 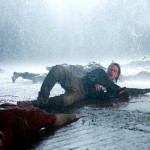 I do not expect zombie movies to deliver a science lesson. WORLD WAR Z is an intelligent, suspenseful movie not about how or why the world is going “zombie” and but what can uninfected people do to save themselves. Gandhi’s “eye for an eye” aphorism comes into play here: If every person eaten by a zombie becomes a zombie themselves, eventually there will be no one left and the zombie nation will begin to die off …until a remote Papua New Guinea tribe has a genetic resistance to the bite killing them and once bitten they become half-human and half-zombie. But that is a movie not written yet.

The zombie “hive” is a fast-moving cyclone; when Gerry and Karin look up from their car while stopped in street traffic, the zombies are eating everyone in sight and destroying buildings and cars. Within hours there are not many humans left. Gerry is called up for service and he and his family are air-lifted to an aircraft carrier in the middle of the Atlantic Ocean. VIPs, TV reality stars, and some people who slipped aboard are safe. The President and Vice President “didn’t make it.” So, were they eaten or are they zombies prowling the halls of the Pentagon?

Gerry’s wife, children, and some kid that left his family to tag along, are there for only one reason. Gerry is given a choice: Go on a dangerous mission to find out what to do or the family and that kid they took along, must get off. 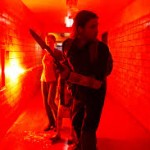 The director, Marc Forster, is securely in command and builds a tense global thriller. Whatever was cut, re-shot, or the rotating input from many writers, Forster pulls it all together. The new zombies are terrific. Zombies are not real, so the elements that make up zombies can change. The hive is a much better idea than zombies barely able to walk. A runner can get away! Pitt can do no wrong. He is believable as a father and a tender husband. And with MAN OF STEEL spending the last 20 minutes in a CGI flight-fight, it is wise filmmaking that Pitt and Forster decided against the obvious super-charged ending and just solve the immediate problem at hand.