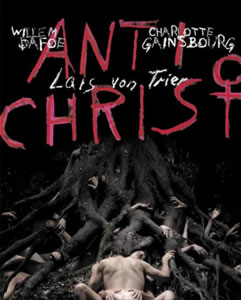 However you assess the New York Film Festival, now in its 47th year, it certainly doesn’t shy away from controversial films or directors. Topping the list this year was Lars Von Trier and his Cannes Golden Palm nominated film, Antichrist. Now getting added to many critics best-of lists, the film shocks with a scene of deteriorating madwoman Charlotte Gainsbourg (She) performing a clitorectomy on herself–after bashing, then jacking off, her semi-conscious husband Willem Dafoe (He) who spews semen mixed with blood.

Viewed through the prism of the horror genre, this is a disturbing tale using some of the best horror film tropes. It makes AntiChrist more than a plunge into the dark sexually charged region between guilt and insanity. Addressed through von Trier’s unique vision, the film truly explores madness as it slides into the demonic realm of the possessed.

During his Cannes Film Festival press conference, the ever-provocative Danish director was asked to justify his movie as stirring the ire of a lot of confused journalists. Though he wasn’t called on to so this time, he did conduct an unusual press conference at the NYFF press screening–broadcast over a huge screen via a skype connection–prompted some journos to some of strange, off-kilter questions.

After you peruse this press conference, it will give you a taste of the kind of intriguing personality and filmmaker Von Trier intends to be — and his glorious failures are better than many directors finest moments.

Q: You said you were suffering from a serious depression when you made Antichrist. Did it affected your process in writing and shooting the film; how did it affected the end result?  Was it different this time from previous films?

LvT: It was different in the way that I am normally excited. Normally I’m extremely happy about my own abilities and talent and what I’m doing. But I felt almost maybe human, so I was not excited.

What it has done for the film… I tried to bring myself out of the depression but it hasn’t really worked. But I’m very happy to see all you people in New York; if you can make it there, you can make it anywhere [laughs].

Q: You’re often called a provocateur as a director; are you upset if people don’t walk out of your films? I didn’t notice anyone walk out today.

LvT: If there are not any walk-outs then I have failed [laughs].

Q: Where did you get the idea for the film?

LvT: I don’t really know where it came from. The idea was to make a horror film, which I know it was not really. I think I started with that. Normally, I know what to say, but I can’t tell you [this time].

Q: This seems to be the most cinematic movie you’ve made in a long time. Was that intentional? Were you trying to move away from the concept of dogme (a cinematic approach developed by von Trier to exploit the low-budget aspects of digital filmmaking) and away from artificiality of the staging you used in films like Dogville?

LvT: I feel the best when I do something that does not look too much like [something I did before]. I must say, I’m not completely happy with the film. I would have wanted more of a dogme link to the documentary past. I cannot work by way backwards.

Q: You said you wanted parts of the film to be more dogme-like in their aesthetic; if so, what parts were you referring to?

Q: The sound design of Antichrist recalled a lot of David Lynch’s films, and the scene where she asks him to whip her reminded me of a similar scene in Blue Velvet. Did you take any inspiration from David Lynch?

LvT: I was very very taken by Twin Peaks, I thought that was a fantastic piece of whatever it was. [laughter] The feature films; Mulholland Drive I was very happy with, but the other feature films I haven’t seen. I’m a big fan so I think I have similar things. Maybe Lynch and I share a fetish.

Q: like Twin Peaks, the film is also set in the Pacific Northwest.

LvT: It is a very naïve idea we have when we shoot in Europe that it can only look like the state of Washington. It’s only because we seem to have a common interest in replicating that. When we did Dancer in the Dark it was done in a place that had a double gallery. 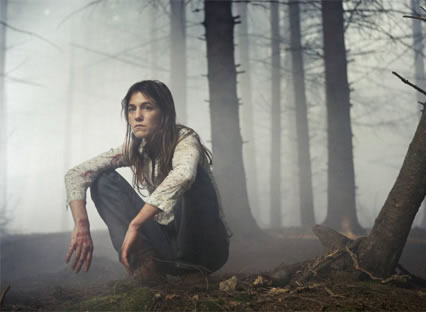 Q: Could you expand a bit on the biblical connections in the film–obviously, you refer to Satan, the Antichrist, and Eden.

LvT: If the film has anything to do, it has to do with that there is no God; that is how I see it. You have a conscience toward Eden, I know, and I’m sorry for that. Normally I would have gone through this quicker, taken all that shit, but I didn’t this time. I was relatively uncritical of the script, that means that all these things stayed.

I think the idea was that it came from her research [on women and possession]. But I’m sorry about the Eden stuff, it came up and I just let it be.

Then it’s very easy since it’s [about] a man and a woman and all that. I have not worked in a way where I was thinking [of] Eden; the reason why it’s called Eden, it was a place that was supposed to be very romantic.

Q: There is the question of the guilt of the Charlotte Gainsbourg character; did she felt guilty because she was a woman of pleasure, because in that scene where she and he are having sex, it goes back and forth between her seeing her child was falling, and yet she didn’t stop to do anything.  She didn’t do anything because the pleasure prevailed. Is that the way you saw it and her?

LvT: You say that she’s not really a mother. Then you should have seen my mother [laughs]. This is nothing compared to what I’ve been through. I don’t know. I think she’s struggling with some guilt from the sexual pleasure, but I believe that from society there has always been a lot of guilt from these things.

I don’t know if she saw him falling. Somehow I felt very much like her when I wrote it. She’s struggling with jealousy but she has a lot of pressure.

Q: Were we supposed to have sympathy for Willem Dafoe’s character? As her therapist we are supposed to trust him, but soon as he changes his wife’s medication, he deserves anything bad that happens to him after this point.

We had some lines in the film where he acts more sympathetically, and then he became extremely unsympathetic, and we had to cut them out otherwise it would have been a very one-sided film. So he ends up with a lot of violence and a lot of stupidity.

Q: What about casting of Dafoe?

LvT: Dafoe is a very very good friend. While I was trying to cast this film, he sent an email and asked if I had anything for him. I said, “Yes, thank God, you suddenly showed up.” I’d worked with him before, and working with him as a director and a good friend, so that was a miracle.

Q: The film definitely was a horror film–or at least definitely has lots of horror influences. Did you have that clearly in mind, certain antecedents that influenced you in the process?

LvT: At a certain point in my confusion I started seeing Japanese horror films and liked them very much. But maybe I liked them not so much for the horror, but thought the cultural differences, it’s interesting to see images that are definitely not from the West. I like them very much.

And yes, I’m influenced of course by The Shining, also, Rosemary’s Baby, absolutely. And for me, “Carrie” was a very good film when I saw it.

Q: What are the basic elements that turn a horror film into a classic?

LvT: I think that Psycho is a classic not because it was scary, though I thought I was quite scary. But I don’t think it’s the scary things that I remember, I remember style.

The good things about horror films is they give you room for a lot of things; room for strange pictures or whatever. And I didn’t find The Shining very scary. As with all other films, it has to do with the personality that you feel in the film.

Q: You give the audience symbolic clues, but they are also clues as to what’s going to happen. When we piece them together, we feel smart about it. Do you do this consciously, when you are in the process of creating a script and/or editing the film? In addition to the role of being creator, do you put yourself in the role of being the audience for your own work.

LvT: I believe that I am the audience, but I am, as myself, a very stupid audience. I went to university to study film and we did a lot of new things, but that is definitely not the way I work. The cinematic impact, it comes from other sources, poetry, or just some strange kind of logic that is maybe only in my head. I do not think of the connections between water drops and acorns when I write it.

Q: Are there specific coping mechanisms that society uses that you would like to see stripped away for your audiences?

LvT: I don’t think I have an agenda like that. I do films very much for my own sake, and I don’t have any idea to reflect on society.

Q: You had some interesting researchers listed in the credits, including a researcher on misogyny. In the writing or making of this film did you learn something about misogyny in yourself, in your work and how to depicted in the film?

LvT: Well it has mostly to do with the things that the female character in the film was working with. Some of the quotations. She did a very good job; I didn’t do very much. I don’t know if I learned anything about if I hated women more. I like to be with women. I don’t think the film really has so much to do with, it could have been the other way around. I of course believe that women are as bad as men.

Q: Was Friedrich Nietzsche’s The Anitchrist an influence?

LvT: I don’t know enough about Nietzsche. I had this Antichrist book lying on my table for 40 years and I hadn’t opened it yet, but the title I liked. I don’t want to say anything about Nietzsche.

Q: When did you decide to dedicate the film to the late Russian director Andrei Tarkofsky and why?

LvT: I must say, [that guy] has been very important to me. I discovered him while I was in film school. I have stolen so much from him over the years that in order not to be arrested I dedicated it to him [laughs]. I should have done it a long time ago, and it’s sincerely meant; I’m a very big fan.

Q: Will there ever be part three of your USA Trilogy?

LvT: About the American Trilogy [part one is Dogville; part two is Manderlay –both have already been released and are available in DVD]; that’s the problem about trilogies, there has to be three of them [laughs]. I do not have the exact idea; when it comes I will make the film, if it is possible.