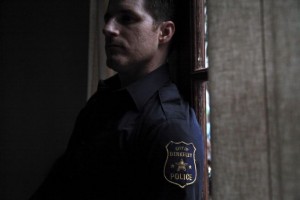 Film Festival Today: What initially got you interested in making “Plain Clothes?”

Sam Jaeger: It derived from conversations I had with police officers. When we’d talk about PTSD, we’d also talk about the military. A lot of police officers struggle here with those same issues. In many ways it’s an even more complex issue police have. An officer goes to work, comes home, and pretends what he saw all day doesn’t affect him at all.

FFT: There are some similarities between your character, Cole, and Bradley Cooper’s character in “American Sniper.” Did working on that film inspire this film at all?

SJ: Actually, not at all. I shot my film a year before I even auditioned for “American Sniper.” It was kind of kismet we were on the same wavelength. There are certainly a lot of parallels.

FFT: You based much of the dialog on conversations with actual police officers. How many different people did you talk to?

SJ: There are three or four different officers that I’ve had extensive conversations with. Two have responded since we made the movie. We’ve had some police departments call and ask if they can use our video for training. Although it’s no indicative of all officers and what they’re going through, it’s certainly something officers need to be mindful of.

FFT: Were there any conversations or stories you considered working into the movie, but didn’t?

SJ: Oh yeah. I actually kept some of the more harrowing stuff out of the conversation. I didn’t feel like going to those lengths in order to be graphic, but I did want to kind of hint at those really visceral moments.

FFT: Do you personally know a lot of people on the police force?

SJ: Of course. There’s a history of service in my family. There are people who are pulled into that line of work and feel the need to protect humanity, similar to Chris Kyle. So that was something that I’m close too.

FFT: Is it difficult directing yourself in a movie?

SJ: No, because it’s one less person to yell at.

FFT: Do you prefer acting, writing, or directing most?

SJ: I know it sounds trite, but I really don’t have a preference. They all challenge me in different ways. For me, writing is the purest because it’s something I can do on my own and feel accomplished. I can’t do that with acting or directing. They’re all part of filmmaking and that’s something I’m very fortunate to be apart of.

FFT: Is there anything you’d like to say to people suffering from posttraumatic stress disorder?

SJ: The more we talk about it, the less alienating it is. My film is meant to be a conversation piece. Communication is a powerful lifeline for officers. Hopefully this film can be an extension of that.

FFT: What do you think is the benefit of making a short film as apposed to a feature film?

SJ: Sometimes it feels good to just get out there and be part of our film community. Gather everybody up for something as ridiculous as trying to make a movie. Short films allow that.

FFT: Would you ever be interested in expanding upon this premise with a feature film?

SJ: We’ve talked about it and people have come to us about it. I think there’s definitely a larger story here. If it’s not a feature perhaps it’s a show.

FFT: Can you explain the meaning behind the films title?

SJ: Good question. I think there’s something about the term, “Plain Clothes,” that seems strange in itself to me. I think there’s something to the nature of an officer who is in plain clothes. It doesn’t matter if an officer has their uniform on or not. He’s always on. That’s what our film is grappling with. How do you turn off that switch? How do you let down your guard? Should you let down your guard? How are officers able to be vulnerable when they’re around their family?

FFT: What’s next for you?

SJ: I’m doing a show for universal with Danny Pudi from “Community.” I wrote a bizarre show about two imbeciles working in a missile silo. We’re actually trying to decide on a home right now.