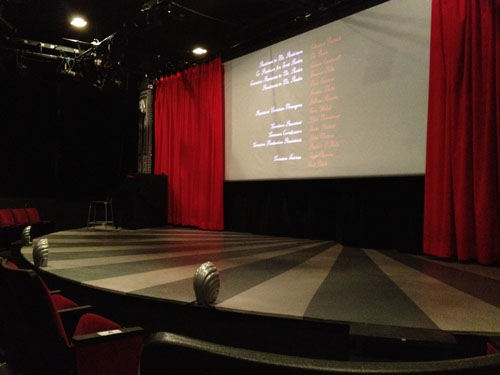 Given more and more independent filmmakers today are exploring theatrical for their films — as this is one way to help stand out from the many thousands of films in a glutted marketplace — I recently had a chance to interview the operator of a newly-opened theater in Hollywood, the Arena Cinema. The operator, Christian Meoli of Voltaire Media, is also generously giving away 2 Nights at his theater, for the winner of an Exclusive Contest (for the “Secrets To Film Distribution” community) to screen their film.

(Contest will run through Thursday, Dec. 20, with the winner being drawn the following day. No purchase necessary.)

Jerome Courshon: This sounds like a good new opportunity for Producers & Directors to be able to screen their films publicly in Los Angeles, and have week-long runs. Tell us a little about your theater.

Christian Meoli: I set up Arena Cinema to serve the independent film community with an intimate, single-screen in the middle of Hollywood. What we did was take this space, which I was booking plays & musicals in, and we retrofitted it with HD Projection, a 19 x 9 foot new screen, new sound and new seats. We made the decision to go cinema-only.

JC: What if someone wants to run longer than a week? Or what about less than a full week? Can they?

CM: Definitely. One can design their run for a week or more, or they can book for just a few days or even only 1 day. Filmmakers should know, however, that with runs of less than a week, you won’t get any major paper to come and review. Regardless, we’re open to the particular needs or plans of the filmmaker or distributor.

JC: Okay. So for those not familiar with the term “4-Wall,” can you explain this for our readers?

CM: Sure. As your readers may or may not know — and I know you discuss this in your Distribution Program — there are two typical deals that filmmakers can use to get into theaters under the DIY scenario. One is to buy the theater out for ‘x’ amount of time, and then all the ticket sales belong to the filmmaker. This is what we do.

Another is to make a percentage deal with the theater, where the theater and filmmaker share in the ticket sales.

We are also open to this, but as an exhibitor, this is riskier for the theater as there are hard costs in running the theater whether 200 people show up or 1 person. For Arena Cinema to consider a box office percentage deal, we would need to see a dedicated P&A budget, a detailed marketing campaign, and a previous track record of success.

JC: How do you compare in pricing to, say, the Laemmle Theaters, where they will frequently rent out one of their screens to a filmmaker for $5,000 per week?

CM: Our pricing is less than theirs, and as far as I know, we have the best-priced screen option in Los Angeles. We really wanted to create a model that would be an affordable theatrical option in Los Angeles — which doesn’t exist in our opinion. Also, I don’t think people can rent out a screen at Laemmle for just one or two nights. Or at least not affordably.

JC: Any other advantages?

CM: Our location — right next door to the Egyptian Theater. You can’t beat our central locale of Hollywood, because you can get the Westside crowd to come, the Eastside crowd, and even the Valley. You won’t get this in any other indie cinema around LA.

I also want Arena Cinema to show movies no one else is doing — or will show for that matter. The vibe Arena Cinema emits is an intimate one with charm. It feels warm, welcoming and communal with a DIY sensibility.

JC: What was the genesis of your idea for this theater for independent filmmakers? What’s your background?

CM: It was a circuitous journey! I started years ago as an actor working in TV & Film, eventually moving into writing. And when I got sick of waiting for that proverbial phone to ring, I began producing my projects as plays in the LA theater scene. Through producing my own work, I found I had a knack for this, and a knack for getting people to attend theater — which is challenging in LA. This led to interesting marketing work I began to do, which then led to becoming a film executive with Bigfoot Entertainment, as their VP of Marketing.

When I took that job, the distribution arm of their company, “Bigfoot Ascendant,” purchased The Crest Theater in Westwood, a glorious 450 seat house. As a result of that acquisition, marketing for The Crest also fell into my lap, and I began to see how much of a vacuum there was for truly independent cinema in LA — smack dab in the entertainment capital of the world. And frankly, I don’t consider 95% of what gets nominated for the Independent Spirit Awards as “independent.” It is not. Those are studio films with studio backing and studio outlets. Or Mini-Major films with Mini-Major backing.

The truth is, a large pool of the film industry just doesn’t get a movie on the big screen. Or can’t afford to. Concurrently at the time, the Polish Brothers were making news with “For Lovers Only” premiering on iTunes. I don’t want to see indie movies just go to VOD, so I challenged myself to create an affordable DIY exhibition model, available to indie filmmakers and distributors. It was at that point I decided to turn the Arena space into a first-run cinema venue.

There’s a lot of unseen talent in Hollywood, and I want to give these incredible filmmakers, producers, and actors a place to showcase their art. This independent theater makes theatrical exposure accessible to all walks of talent, big and small.

CM: With my marketing background — which included presenting and promoting hundreds of live events in Los Angeles over the last 10 years — we have the ability to service producers and distributors with promotional needs, from PR to marketing. We have strong reach with our extensive film network and connections with reviewers. We can work to generate coverage and get films buzz.

This optional addition is customizable and would be tailored to the needs & budget of a project. Marketing & publicity are essential in the competitive environment of Los Angeles, where there can be hundreds of events happening on any given night. You have to create noise.

JC: Any other services you offer?

CM: Before our remodel of the theater, we were hosting film festivals and focus group screenings. One of our first focus group bookings was for the producers of “3, 2, 1… Frankie Go Boom,” that Universal and Gravitas ended up acquiring. We helped the producers do a focus group for under $1,000, when most of these can cost $10,000 and up.

But while we operate as a regular theater now, we’re still open to hosting film festivals, premieres, industry press screenings and so forth. Heck, if a producer or director wants to watch dailies on a big screen, that’s fine too.

CM: Yes. I love the DIY model. And I love what you do, in offering DIY knowledge — besides traditional distribution knowledge — to participants who join the “Secrets To Film Distribution” community. With Arena Cinema, this is another added component to the distribution equation. Filmmakers getting their work out there, and not necessarily having to wait for someone to give them permission, is key in a DIY approach.

I welcome anyone in your community to contact me to discuss needs, options or logistics so we can help present their indie films on a big screen!

Don’t forget to enter the Contest to Win 2 Nights at the Arena Cinema for your film!

Film Producer & Distribution Expert Jerome Courshon has assisted hundreds of filmmakers with achieving distribution through his classes, speaking engagements, and consultations. For more info about him or his 3-Day Distribution Program, “THE SECRETS TO DISTRIBUTION: Get Your Movie Distributed Now!,” visit: http://www.Distribution.LA