I’m Morgan Spurlock’s last interview of the day, but you’d never know it by his hyped-up tomfoolery. The energetic filmmaker is on a press tour for his latest documentary, “POM Wonderful: The Greatest Movie Ever Sold”, a film financed by product placements that pokes fun at product placements in films. Even though it’s been a long day for Spurlock, his playful antics suggest it’s just the beginning. 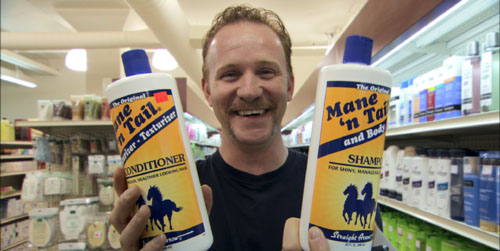 After knocking elbows with me (I mention I have a cold), Spurlock ducks out to use the restroom—he says. I seriously wonder if he took the opportunity to down some amphetamines while he was gone. When he returns, he talks a mile a minute barely taking a breath between long, articulate sentences punctuated by lots of jokes.

Q: Morgan, what do people in your hometown of West Virginia think of you?

A: I grew up Billy Hilly. My father was an entrepreneur and started his own torque wrench company. He gave me the ability to not be afraid of failure. I’m taking him to the Kentucky Derby thanks to Mane and Tail Shampoo (one of the film’s sponsors). They have a box at the finish line. It’s like I’m going to the Rock-n-Roll Hall of Fame with Bono!

My whole creative side came from my mother. She never butt into my business, but encouraged my creativity. She wrote poetry and short stories—fantasy, mostly contemporary. She was an English teacher and guidance counselor who corrected my papers with red pencil.

All I ever wanted to do was make movies and TV shows. My parents would take me to see The Exorcist, Jaws, The Evil Dead, Scanners. From age 6 to 11, I went to see crazy stuff you should never take your kid to. There were no barriers. They let me see and talk about anything!

And, I’m the youngest of three ballet-dancing boys. Both of my older brothers went on to become professionals, but I stopped after 13 to play sports.

Q: Where do you get your sense of social justice?

A: That comes from my parents, people who believed in a right and wrong and tried to instill in us what’s correct and what’s not. We were all boy scouts and my father was a troop leader. My mother took in strays –both people and animals. There was not one year in my life that someone was not staying with us at some point.

She would say, “We have to help him. He has nowhere to go. If something like this ever happens to you, I hope someone helps you.” This is what I grew up around. Even now, every time I come home, my mother has another animal. 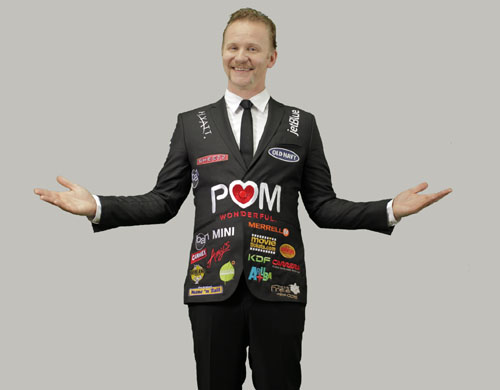 Q: How do you feel about being compared to Michael Moore?

A: What! Being compared to the most successful documentary filmmaker in the world? Mike makes a movie and it becomes front-page news, the lead story in magazine. As a filmmaker, what more could you want than to drive a conversation? You want do something that starts to get people engaged, anything you can to battle apathy. People love him or hate him, but Mike was incredibly supportive of Super Size Me.

Q: Did your sponsors—the very subjects of your lampooning–appreciate the irony of what you did in this film?

A: Irony was lost on a lot of them, but collectively the benefit was not. The film makes them look instantly smarter, courageous and self-aware. At Sundance, 11 of the 15 brands were there and got standing ovations.

People leave the movie and want to get some of that Mane and Tail Shampoo. They want to check into the Hyatt. But they’re conflicted. ‘He got me’, they think. ‘I went out and bought this because of that stupid movie.’

The film pulls back the veil in a way that has not happened for a long time. You won’t look at Hollywood movies the same way again.

Q: Did you know that Hawaii…

A: Neither does Maine.

Q: So did you just want to go to Brazil? Is that why you featured Sao Paulo as the place that bans outdoor advertising and not somewhere else?

A: After visiting there, you become so hyper-aware of outdoor ads. Where do we draw the line? How do we reclaim that sacred space? Seattle could pull it off. San Francisco, Portland, Austin. It’s a symbiosis between city and landscape. Sao Paulo made that decision five years ago and it created a rise in street art. But they found that in neighborhoods with murals, crime has come down. In the projects, the only businesses that went out of business were bail bonds. People that stayed inside before came out to the stores to buy their goods.

Q: What did you learn from making this film?

A: I am not Abercrombie and Fitch material.

Q: They told you that when you approached them about sponsorship?

A: The advertising director said, “Have you looked in the mirror? Do you really need me to explain? How does a tall, pale, balding, out-of-shape documentary filmmaker with a moustache fit our image?”

A: It took me 14 months to get the weight off and keep it off after Super Size Me. The last 9 pounds took forever!

Q: What’s your next project?

A: I was always inspired by comic books—Spider-Man, GI Joe, Mad Magazine. When I met Stan Lee at Comic-Con, I told him that as a kid he changed my life. He said, ‘I love what you do,’ and I said, ‘We should make a documentary together.’ For 25 years, he always said ‘no’ to filmmakers, but this time he agreed. So, we followed seven different people against the Comic-Con backdrop. Episode 4, A Fan’s Hope, will feature up and coming artists.

A: I’m a terrible, terrible artist.

Q: Yes, but you’re an outstanding filmmaker. Who else could have pulled off a feat that gets advertisers to finance a film that puts down advertising?