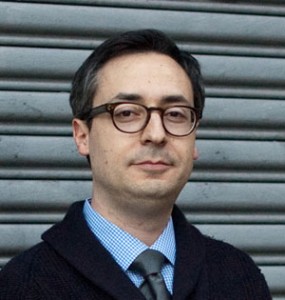 Goran Topalovic is  a film curator, writer, and consultant and the co-founder and executive director of New York-based Subway Cinema which has been essential for programming Asian films in the United States. Since 2002, Topalovic is the co-director of Subway Cinema’s annual New York Asian Film Festival (NYAFF), which is North America’s leading Asian film festival .devoted to popular Asian cinema. Among other credits are  writing about film for many print and on-line publications, and serving on the juries of several international film festivals.

Claus Mueller:         What prompted the NYAFF move to Lincoln Center from its former downtown locations such as the Anthology film archives?

Goran Topalovic:  The festival was growing, and we needed to find a like minded venue/partner organization that could share the ever increasing logistical and financial burden of organizing the festival of our size, be more suitable for hosting higher profile guests, and help us reach more mainstream audience. In this regard, the Film Society of Lincoln Center was a perfect fit for us, and we have worked together on co-presenting NYAFF since 2010.

CM:     Has there been a change in the NYAFF audience since you moved and does it impact your programming?

GT:    The overall focus of NYAFF’s program on Asian popular cinema has remained the same. What did change, and this is in large part due to the bigger size of the festival itself (more slots to fill), is the increase in variety and range of genre films that are being selected. While we need to ensure that hardcore Asian cinefiles are satisfied without choices, we also need films that are more accessible for casual viewers, as well as those that we personally want to champion. We also tend to give more room to discoveries of classic Asian films (for example this year’s focus on Taiwanese exploitation from late 1970s and early 1980s), which we haven’t been able to do as much when the festival was smaller.

CM:    What is the rough proportion of your audience from an Asian – American descent?

CM:    Do new digital platforms and social media strengthen the appeal of your festival?

GT:     I am not sure about strengthening the appeal, but social media certainly allows us to be interactively engaged with our audience on a regular basis, and to extend our brand and festival experience beyond just the film screenings.

GT:      I don’t really have the sense of how Netflix impacts the interest in Asian film. I think it’s good for Asian movie fans to have access to the films they are interested in, but for someone who’s not familiar with Asian cinema, I’m not sure that they would watch them, just because they are available on Netflix.

CM:   How many films were submitted and selected for the 2013 edition?

GT:     We don’t have an official submission process, and films participate at NYAFF by invitation. We select films based on film festival viewings, DVD and online screener viewings, and sometimes private screenings arranged for us by the film production or sales companies. We did select 62 feature films

CM:    How do you handle the selection process?  How many people are involved?

GT:    Currently, we have 5-6 people that are involved in the selection process, each with their own area of specialization and network of contacts in Asian film industries. Sam and I make all final decisions regarding lineup.

CM:    What is the funding basis for your fest?  For example what are the relative shares of private vs. public funding which you receive? What is the primary source?

GT:      In the breakdown of funding from private and public sources public funding leads with 62% and corporate sponsorship/private donations amounts to 38%

CM:    In your total income (ads, private, corporate and public) what is the percentage share of revenue through sales of tickets?  And how many are sold?

GT:   We had around 11,000 admissions this year, and the revenue from ticket sales comprised roughly 25% of the total income.

CM:   What were the primary objectives of the NYAFF when it was launched in 2002 and how, if at all, have they changed?

GT:   Our objectives have not changes since 2002 – our mission is and had always been to increase exposure and appreciation for Asian popular cinema in the U.S.

CM:    What are the most important new trends/tendencies you detected since setting up the festival?

GT:   The Proliferation of new technologies, both in modes of production and distribution, is making movies less cinematic and less movie-like. There’s an overall degradation in the cinematic, visual quality of films, especially when it comes to composition and staging, which is slowly becoming a lost art.

GT:   The obvious answer is China, but we have also been impressed by a young generation of independent Filipino filmmakers: while their genre films lack polish, they are infused with refreshing raw energy and social consciousness that’s lacking in films from dominant film producing nations.

CM:   What are the biggest challenges you experience running this festival?

GT:   Making sure that we have enough funding for each year, and finding ways to attract more corporate sponsors.

CM:   China will soon be the largest global film market and the most important production (and probably co-production) country. Will that impact your program?

GT:   We have already increased the number of Mainland Chinese films in our program, but that’s because we’re finding more quality films that we like and that we also feel are of interest to our audience. Despite increasing importance of China in the global film market, it’s the films from Hong Kong and Japan that remain the most popular at NYAFF, so it will take time for our audience to really worm up to Mainland films.

CM:   There has been an explosion of film festivals. What is the impact on your fest?

GT: NYAFF has a strong programming focus and identity, dedicated fan base, and it occupies a particular niche in New York’s festival landscape. As such, it’s not really impacted by any new film festivals.