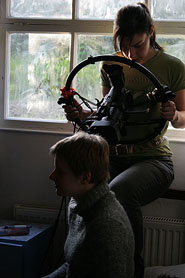 Luis Pedron: The theme of inside and out, yin and yang, opposites attract pervade your very effective film, I’m intrigued where these related themes came about when you were writing this movie?

Eleanor Burke: “Stranger Things” originated with a discussion about inside and outside. During various periods of her life my grandmother was itinerant, and we were very influenced by her story. We began with the character of Mani, who is homeless, and then started writing a story about this outsider gradually being let in. In the film, Oona, a young, recently bereaved woman, invites Mani to stay on her property. As we workshopped the script, we discovered that in many ways, Oona was also an outsider and that the theme of outside and inside manifested itself on many levels.

Ron Eyal: There’s also something very touching about experiencing a connection between people who seem to have little in common, but who discover the humanity in each other. We wanted to put that journey into the film and to explore the importance of companionship.

Luis Pedron: With a beautifully made film, which used a very actor centric process, were you influenced by Mike Leigh’s style of collaborating with his actors and explain to us the involvement of your actors in the whole journey of creating “Stranger Things?”

Eleanor Burke: I’m British, so I grew up watching Mike Leigh’s films and I love his work. We didn’t use his methods exactly, but we’re definitely influenced by the fact that he has created his own techniques. I would say that knowing his work gave us permission to develop our own practices. Like him, we find it very rewarding to collaborate with our actors and to put them at the center of our process.

Ron Eyal: Throughout the shoot, we aimed to arrange everything around the actors. We workshopped the characters’ backstories with them as preparation for the film, but we didn’t give them the whole screenplay to read. Unlike most films, we shot “Stranger Things” in script order and we revealed the script to the actors in segments during the shoot. Because of this, the actors only knew as much as their characters would know in any particular scene so they could experience their characters’ discoveries and respond with a lot of spontaneity.

Eleanor Burke: We also wanted to keep the set very intimate. Film sets are usually very chaotic environments. We worked with a small crew and put the actors’ work before the technical requirements of filmmaking.

Luis Pedron: Bridget Collins subtle and intense acting sensibility reminds me of Imelda Staunton, can you comment on that and how did you get about casting her in your film?

Ron Eyal: We wrote “Stranger Things” for our two main actors, Bridget Collins and Adeel Akhtar. We had worked with both of them previously on short film projects and we knew they were enormously talented actors with incredible instincts. We first met Bridget Collins in an audition for a short film we made called “Ruth and Maggie.” Bridget gives so much depth to her performance, and like you say, she can convey a huge amount with great subtlety. She’s very compelling to watch.

Luis Pedron: How did you get to cast Adeel Akhtar (“Four Lions” and an Actors Studio student then)?

Eleanor Burke: We met Adeel Akhtar in New York when he was at the Actors Studio and we were in the graduate film program at NYU. We loved working with him and so when he moved back to London after his graduation we went over a few times to work with him again before making “Stranger Things.”

Ron Eyal: Adeel is a very versatile actor. He’s wonderful in “Four Lions,” where he plays a real buffoon. Mani is a very different character and Adeel brought real sensitivity to the role.

Luis Pedron: Your film is effectively strong themed and touching, congratulations! I heard you shot and directed this film and you are a husband and wife team. What was your process in collaborating on your first feature film? Did you have any arguments about decision making? Any fun anecdotes while shooting?

Eleanor Burke: Thank you! We collaborated on several short projects before co-directing “Stranger Things,” so we were used to working together, although we had never directed together before.

Ron Eyal: When we were planning the film, we thought that we would divide our roles very cleanly on set. Eleanor would be dealing with visuals and I would work more closely with the actors. In practice, we found we didn’t need to do it that way and we collaborated on all elements of the filmmaking process. We love working together and bouncing ideas off each other.

Eleanor Burke: Funnily enough, we didn’t find we needed to argue about direction on the set at all. We were very much on the same page. It helped that we wrote the script together and that we wrote it for the actors and for the location, because we brought a shared vision to the shoot.

Luis Pedron: I heard you guys lived and ate at the actual cottage location in East Sussex, England with your actors, tell us about that experience?

Eleanor Burke: Yes, Ron and I lived at the cottage with the two main actors throughout the shoot. It definitely helped us integrate the house fully into the film, which was very important. We wanted the house to act as a character and we also needed it to exert an influence on the characters.

Ron Eyal: As you can see in the film, the house is quite run down. It’s in the countryside and there’s a lot of insect life and animal life there. We have shots of that wildlife in the film, especially the insects, because it was all around us and as we shot the film it ebbed into the story.

Eleanor Burke: We also rehearsed outside in the fields and on the beach nearby. The location was very alive. It was springtime and it was full of birdsong. There were ewes lambing. I think we were all very affected by life of the location.

Luis Pedron: Another unique style is how you gave the actors the scenes only as they were performing them within that moment, of course, I know you workshopped their personality backgrounds but shooting like this helped your actors become organic, do you suggest filmmakers to try this process and why?

Ron Eyal: We found the process very effective. “Stranger Things” is about two people gradually discovering each other and so although we have worked this way before, letting the actors experience their characters’ discoveries was particularly apt for this project.

Eleanor Burke: Directors work in different ways, but I definitely found working like this very rewarding. We like to give actors the freedom to respond spontaneously and to explore scenes. The actors created a lot of the moments we love the most in this film themselves.

Luis Pedron: Coming as the Best Feature awardee from the recently concluded Woodstock Film Festival, how excited are you to be at the Slamdance Film Festival? As per the official website you guys are the film that most people are excited about?

Eleanor Burke: We were honoured to win at Woodstock and we’re thrilled to be in competition at Slamdance. It’s a fantastic festival and all the films we’ve seen so far are really outstanding.

Ron Eyal: We’re having a great time. Our first screening was lots of fun and we’re looking forward to our next one, on Tuesday.

Luis Pedron: How did you both come to prepare in experiencing the festivities at Slamdance Film Festival 2011 in Park City, Utah – spiritually and physically?

Eleanor Burke: We were preparing for Slamdance during the holidays so it was nice to touch base with our families in the run up to the festival and to take a little time off to be with them. We were in California with Ron’s family for Thanksgiving and then in London for Christmas.

Luis Pedron: What is your advice to filmmakers out there filming their first feature film?

Ron Eyal: Be open and be ready to learn a lot.

Eleanor Burke: Casting is very important. You hear this all the time, but it’s true: if you cast the right actors most of your work is done for you.

Luis Pedron: What is next for Eleanor Burke? for Ron Eyal? and for “Stranger Things?”

Ron Eyal: We’re developing our next feature. It’s about an estranged father and daughter and will be in a similar vein – an actor-oriented drama.

Eleanor Burke: We’ll continue directing together. We developed our techniques considerably over the course of making “Stranger Things” and we’re excited about pushing them even further on the next one.