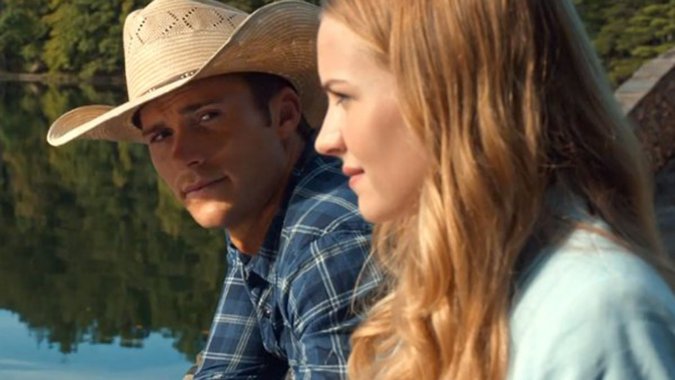 Have you seen any of the other nine films inspired by Nicholas Sparks’ relentlessly popular novels? Then you’ve seen “The Longest Ride.” Seriously, it is astonishing just how cookie cutter each movie associated with Sparks is. Even the posters for his screen adaptations do nothing to hide the fact that these sappy melodramas all come off an assembly line. The only way to stomach a picture like “The Longest Ride” is by playing a drinking game. Of course if you take a shot every time the film recycles another generic cliché, you’ll probably have alcohol poisoning once it’s over.

There’s little reason to review a movie such as this. Let’s just delve into the plot and you’ll know why it stinks. Britt Robertson plays Sophia, a generic small town girl with big city dreams. She takes a break from studying art one night to see a rodeo show with her generic giggling sorority sisters. There she meets Scott Eastwood’s Luke, a generic blue-collar bull rider with a complicated past. Cue the generic scenes where the two leads go swimming in the lake, get caught in the rain, and make the audience want to throw up in their mouths.

Oh, and don’t worry if that doesn’t sound generic enough for you. “The Longest Ride” has two generic romances for the price of one. On their first date, Sophia and Luke save a generic grumpy old man named Ira (Alan Alda) from a burning car. Alda looks half asleep throughout most of the movie, but this kind of works to his advantage since Ira is bound to die by the third act. Via a series of generic love letters, Sophia and Luke learn about Ira’s courtship with a woman named Ruth (Oona Chaplin). It’s practically love at first sight, but the two are driven apart by a series of generic dilemmas such as war, infertility, and death.

Jack Huston plays Ira in these flashbacks and he at least shares some resemblance to Alda, which is more than can be said about James Marsden and Luke Bracey in “The Best of Me.” Compared to that infuriatingly awful Nicholas Sparks adaptation, “The Longest Ride” isn’t quite as pandering, manipulative, or, that’s right, generic. It has a couple minor saving graces. The actors all give competent performances and the leads have acceptable chemistry. We also fortunately don’t have to put up with any one-dimensional villains or disapproving parents. Still, the cons outweigh the pros here by a metric ton.

Being the tenth entry in Nicholas Sparks’ theatrical library, you should know exactly what you’re going to get with “The Longest Ride.” It’s a cheap soap opera. In all fairness, a daytime soap can either be trashy fun or unbelievably boring. This film strips away any insane plot twists and instead plays up the dull scenes where our lovers just lie in bed together. That might be tolerable for forty minutes. At well over two hours, however, this truly feels like the longest ride.