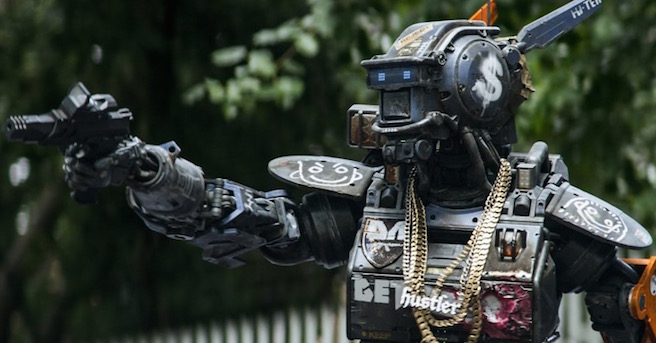 While “District 9” was indeed a good film, it’s possible that we might have overhyped it back in 2009. The story of a man who suddenly finds himself siding with “savages” in an oppressive society had been done countless times before. It’d even be done again a couple months later when “Avatar” came out. Nevertheless, Director/Co-Writer Neill Blomkamp did distinguish the familiar story with empathetic characters and a strong atmosphere. “Chappie” doesn’t necessarily have a revolutionary narrative either, but unlike “District 9,” the characters here are all cheap cutouts and atmospherically it feels like backwash from Blomkamp’s previous efforts.

It’s a high-tech future where robots have replaced humans as law enforcement, but video game consoles still haven’t evolved beyond the Play Station 4. Dev Patel plays Deon Wilson, the creator of these police droids who believes he can make a robot capable of freewill. Deon’s boss, played by Sigourney Weaver in wasted performance, isn’t exactly sold on his proposal. Nevertheless, he goes through with the experiment anyway and breathes life into a robot named Chappie, voiced by Sharlto Copley. Innocent Chappie is exposed to a harsh life of crime, however, when he imprints on three criminals looking to pull off a heist.

Every person in this movie can pretty much be summed up based on their initial appearances. Contrasting Patel’s wide-eyed, peaceful scientist, Hugh Jackman plays a gung-ho, ultraconservative inventor who wants to line the streets with his giant battle mechs that look like the ED-209 from “RoboCop.” If that villain isn’t clichéd enough for you, we also get South African rapper Watkin Tudor Jones, aka Ninja, as a cartoonish gang leader who wants to use Chappie as a weapon. Then there’s Brandon Auret as a crime lord with such poor English-speaking skills that his lines need to be accompanied by subtitles. So why didn’t the filmmakers just have him speak in his native tongue?

There are only two performers that manage to overcome their poorly written parts. One of them is Yo-Landi Visser as a gang member who develops a motherly attachment to Chappie. Granted, her parental instinct does come out of nowhere and is kind of hard to buy. Her scenes with the robot are quite sweet, regardless. The other standout is Copley, who supplies Chappie himself with a delightful childlike charm. Still, the character honestly isn’t any different from Johnny Five, the Iron Giant, or Data from “Star Trek,” not to mention E.T. We get it. Robots are people too…sort of.

Blomkamp’s greatest error with “Chappie” is that the tone is all over the place. We immediately go from one scene involving Chappie comically talking like a street thug to a brutal scene in which the poor robot is senselessly tortured. The film doesn’t arrive to an original idea until the final five minutes, which does bring matters together in a clever fashion. By then, though, it’s too little too late. Blomkamp definitely has the potential to make another solid picture like “District 9.” Between this and the just okay “Elysium,” however, he needs to go back to the drawing board.