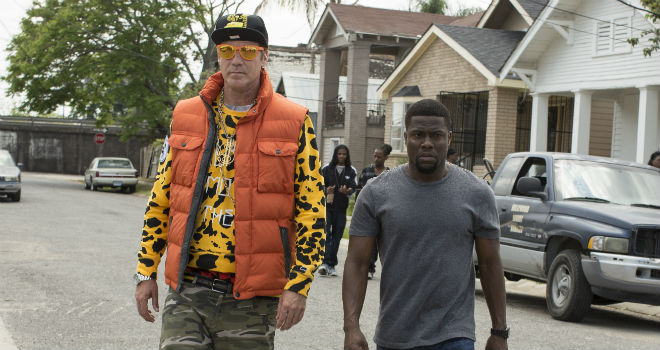 “Get Hard” is about as hit and miss as comedies get. Some jokes hit it out of the park where others crash and burn. This isn’t a movie people are going to be revisiting and quoting years from now. Actually, it’ll likely be completely forgotten over time. For a few sidesplitting scenes and two well-matched leads, though, it doesn’t deserve to be entirely overlooked. Assuming you’re in the mood for a comedy like this and have 100 minutes to spare, “Get Hard” is an enjoyably stupid waste of time. How’s that for a recommendation?

Will Ferrell is James King, who, like every character Ferrell plays, has everything going for him. He’s a millionaire, just became a partner at work, and is engaged to a smokin’ hot, yet despicable, woman played by Alison Brie. James’ world is turned upside-down when he’s framed for tax evasion and sentenced to ten years in prison. Desperate to survive in the big house, he turns to Darnell Lewis, an African American car-washer played by Kevin Hart. While James believes otherwise, Darnell has never been to the slammer. Since the businessman is offering 30 grand for tutoring, though, Darnell decides to play along.

Beyond that, there isn’t any plot whatsoever. The setup is just an excuse for Ferrell and Hart to engage in a series of outrageous scenarios and exchanges that don’t exactly play into a grander story. It’s all filler, but a fair deal of “Get Hard” will have you laughing out loud. The best bits include Ferrell mastering the art of hiding a shiv, a fake riot with all too real repercussions, and a lesson in oral sex. Some scenes aren’t as funny as they could be, like Ferrell trying to blend in with a ghetto gang. Other scenes aren’t funny at all, such as when the guys have a run-in with white supremacists. Although it’s often given the opportunity to be more, “Get Hard” doesn’t say anything new about race relations or incarceration.

Nevertheless, Ferrell and Hart are terrific together through the good times and the bad. Ferrell has such a natural gift for comedy that he can make horrible material mediocre and mediocre material passable. He has undeniable chemistry with Hart, who’s yet to star in a great buddy comedy. Regardless, “Get Hard” is a notable step up from “Ride Along” or “The Wedding Ringer.” Ferrell and Hart give it their all here and, in a testament to their talents, those efforts pay off. The two are kind of like Dan Aykroyd and Eddie Murphy in “Trading Places” if that movie had a lot more needless rape gags.

If you require your comedies to have a little more substance and wit, stay home and rent an old classic from Woody Allen or a new classic from Wes Anderson. Oh, and of course “Trading Places” is always a safe bet. For the modest smiles “Get Hard” will provide, however, it’s just barely worth your ten dollars. See it, have a few laughs, and immediately move on to something else…assuming they don’t try to make a sequel. We really don’t need any more time added to this sentence.