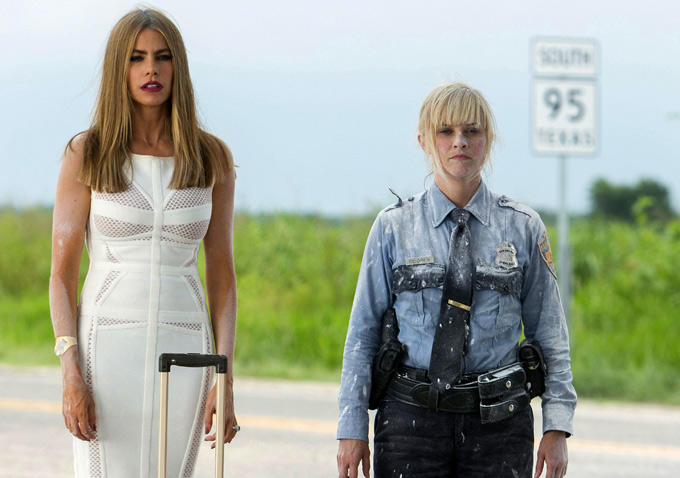 “Hot Pursuit” is exactly like every action/comedy road trip movie that’s come out since “Midnight Run.” Discussing the plot is hardly necessary. You all know what’s going to happen solely based on the poster. Two opposites will be forced to hit the road together. Along the way, they’ll bicker, undergo costume changes, get chased by bad guys that are more menacing than funny, and maybe even learn something about one another. Then as a testament to how lazy the movie truly is, the filmmakers will tack on some excruciating bloopers over the credits.

The only reason to see a film like this is if the stars can bring something special to the table. There’s no doubt that Reese Witherspoon and Sofía Vergara are capable comedic actresses. Where the rest of the film doesn’t try hard enough, though, the stars try way too hard to make this effortless material work. In the end, we just have a desperate attempt to polish a turd.

“Hot Pursuit” is as by-the-books as its main character, Cooper, a police officer played by Witherspoon. She knows police protocol like the back of her hand, but is completely inept in the line of action and everyday conversation. Witherspoon puts on a Texan accent so thick that she actually makes Sofía Vergara sound less like a cartoon character. Vergara plays Daniella Riva, a drug dealer’s trophy wife who’s set to testify against a drug lord. Cooper is charged with escorting Riva to the trial, but the gals get sidetracked after some obviously crooked cops set them up. Thus, Cooper and Riva go on the run and yada, yada, they become friends.

With films like “Pleasantville,” “Election,” and “Legally Blonde,” Witherspoon demonstrated early in her leading lady career that she has an unparalleled charm. Here, however, she’s stuck playing a fickle character that’s street-smart one minute then a bumbling oaf the next. There’s a fine line between being a lovable scatterbrain and simply being inconsistent. As for Vergara, this is yet another forgettable film role to add to her résumé along with “The Smurfs” and “New Year’s Eve.” Both seem to think that acting as energized as possible and screaming their lines will somehow result in laughter. They might as well have gotten down on their knees and begged us to laugh.

Director Anne Fletcher is a gifted choreographer and has made a couple descent flicks like “The Proposal.” There’s nothing neither she nor her stars can do to salvage David Feeney and John Quaintance’s script, though. It takes no chances, few one-liners or setups standout, and there are countless superior buddy movies available as an alternative. From “Planes, Trains & Automobiles” to “The Heat,” you can do a lot better than “Hot Pursuit,” as can Witherspoon and Vergara.