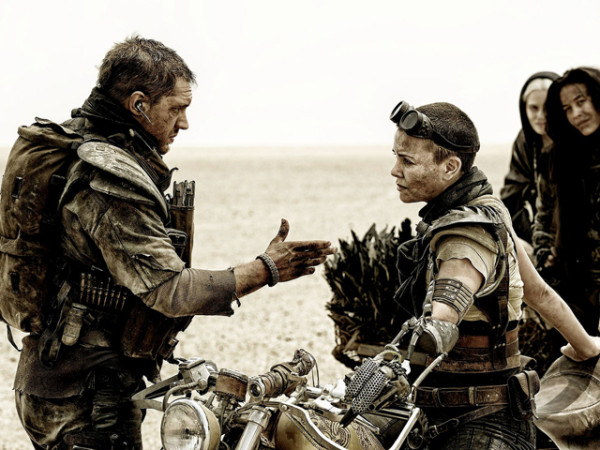 The “Mad Max” trilogy takes us back to a time when sets were handmade, people performed stunts, and CGI wasn’t around to provide shortcuts. There’s no doubt that CGI is a marvelous tool that’s made once unfilmable stories possible. When almost every blockbuster is solely relying on the technology, though, one can’t help but long for the real deal.

The good news about “Mad Max: Fury Road” is that it doesn’t commit CGI overkill like “Indiana Jones and the Kingdom of the Crystal Skull” or “Star Wars: Episode I – The Phantom Menace.” Director George Miller stays true to the look and spirit of his original films, utilizing practical effects roughly 90% of the time. Then when Miller does turn to CGI, it’s as seamless as the effects in either of the “Babe” pictures. The final result is one of the most dazzling summer movies ever produced and arguably the first film to truly capture the thrills of a rollercoaster from start to finish.

Tom Hardy takes over for Mel Gibson as Max Rockatansky, a road warrior still wandering the post apocalyptic world. His lovely day takes a turn for the worse when he crosses paths with Furiosa (Charlize Theron), who is leading five sex slaves across the desert to freedom. Hot on their trail is the tyrannical King Immortan Joe (Hugh Keays-Byrne), his vicious army, and even some kickass musical accompaniment.

How to describe a film like “Mad Max: Fury Road?” Imagine if every character from a drive-in B-movie came to life. Then imagine if every drawing from a heavy metal album came to life. Now imagine all these bizarre creations entered a death race that makes “Furious 7” look like “Driving Miss Daisy.” That wouldn’t even begin to describe just how insanely awesome this movie is.

Basically one giant car chase of epic proportions, the film ups the ante with every passing moment. A rally with trucks, explosions, and a rockin’ guitarist doesn’t sound extreme enough? Let’s throw a monstrous dust storm into the mix just to kick it into gear! The difference between the nonstop action here and something like “Transformers” is that Miller’s vision is never mindless or dull for a second. Every shot offers something visually unique and the film almost never hits the breaks. Even when “Mad Max: Fury Road” does provide its characters some breathing room, it still feels like the movie just downed an entire pot of coffee.

This is such a revelation of art direction, effects, makeup, stunts, cinematography, editing, and choreography that it’ll be easy for people to overlook the performances. Credit should go to the entire ensemble, however, which also includes Nicholas Hoult as a jittery psychopath that sounds like Gollum meets the Crypt Keeper. It isn’t easy fleshing out people that have little dialog and fairly basic goals. With what they’re given to work with, though, everyone makes their characters interesting and even empathetic in some cases. We genuinely want to see our heroes survive this dementedly hyper experience on a road of redemption, salvation, and, of course, fury.