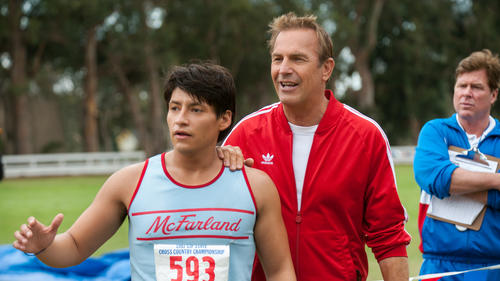 Why do we keep going to see sports movies like “McFarland, USA?” We all know what’s going to happen. A down on his luck coach finds himself teaching a ragtag team of misfits. At first they won’t be any good, but with perspiration and inspiration, the underdogs will become unlikely champions. Along the way, the coach will teach his kids something and maybe they’ll teach him something too. Cue the epilogue where we get a brief description of what happened to each player and roll the credits.

So what is it about this formula that resonates with so many people? Is it because we love sports, underdogs, and seeing the same “true story” repeated over again? To an extent, but sports movies dig a little deeper than that. Sure, we knew exactly how “Remember the Titans,” “Glory Road,” and “Coach Carter” would play out. Nevertheless, those were all well made, well acted, and moving films. The inspirational sports genre is essentially comfort food with some nutritional value. At least that’s more than can be said about most romantic comedies, action blockbusters, or sequels, which are overly familiar and lack any value whatsoever.

“McFarland, USA” is another sports flick that doesn’t bring much new to the story, but still stands out thanks to its solid performances, direction, and life lessons. Kevin Costner plays Jim White, a former high school football coach who is forced to relocate his family to McFarland, California. Suddenly, White is the minority in a community of mostly Latinos, stray dogs, and chickens. With several students being exceptional runners, Jim sees potential for a cross country program. Pretty soon he assembles a team comprised of the kid from broken home, the pipsqueak, the wiseass, the fat kid, the two brothers, and the other kid.

Niki Caro’s film does a fine job at developing Costner’s character and his relationship with his students. However, the narrative might have benefitted from a few more scenes told from the players’ perspectives instead of mainly focusing on the coach. It’s interesting that “McFarland, USA” would come out just a couple weeks after “Black or White,” another film about race relations where a character played by Kevin Costner overshadowed most of the ethnic actors. While neither film is extraordinary, both still effectively make commentary on social issues without turning anybody into a stereotype.

There isn’t much else to say about “McFarland, USA” except if you’re looking for an inspirational sports picture, this will get the job done. If you’re a sourpuss who’s seen one too many of these movies, you can probably sit this one out. While you can’t fault a person for disliking a film that doesn’t offer many surprises, it’s best to view this genre as if you’re a P.E. teacher. Your students might not take home any trophies, but as long as they sincerely put their best possible effort into the game, give them a passing grade and call it a day.