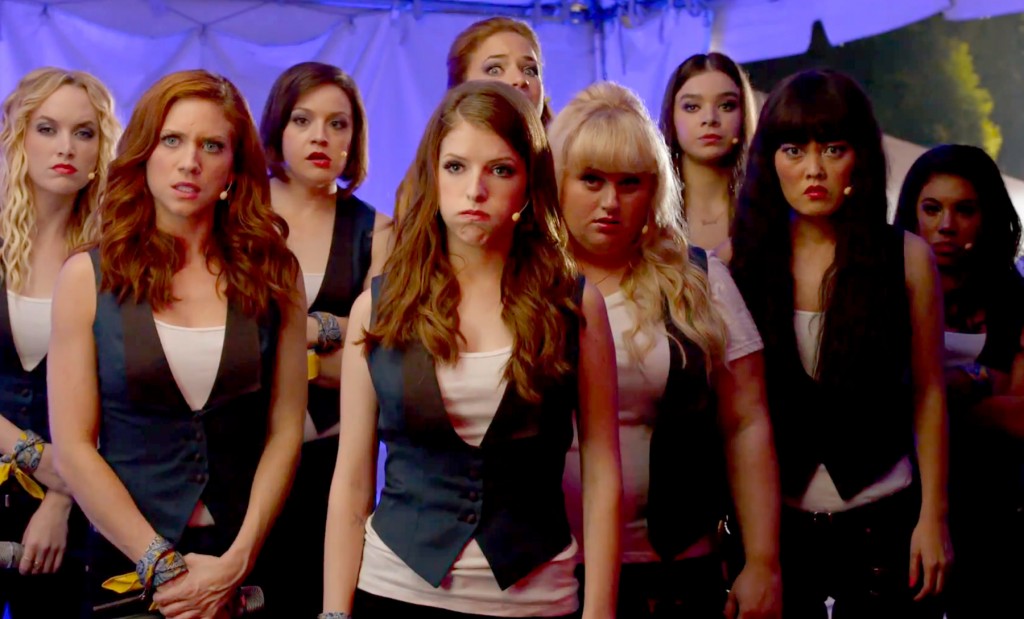 The original “Pitch Perfect” was a solid box office success, but it’s popularity spread like Gangnam Style on DVD. If your fifteen-year-old daughter isn’t singing along to the “Frozen” soundtrack, chances are she’s playing the “Pitch Perfect” soundtrack over and over again. With strong crossover appeal between female and male audiences, there was little doubt the aca-awesome comedy would spawn a sequel. Does this franchise really have anything else to sing about, though, or is it the most overhyped one-hit wonder since “Glee?”

Like “22 Jump Street,” “Pitch Perfect 2” is a rare sequel that surprisingly comes close to topping its predecessor. What makes this especially surprising is that the plot’s basically a rehash. The Barden Bellas, an all-female musical group that made a capella cool, is now being lead by Anna Kendrick’s Beca and Brittany Snow’s Chloe. Subsequent to winning regionals or sectional or whatever for the third year in a row, the Bellas lose their voice when Rebel Wilson’s Fat Amy suffers a wardrobe malfunction. The fact that the incident took place with President Obama in the audience doesn’t help. The only way to save the Bellas is if they win an international a capella competition, a feat no American team has ever achieved.

So why is it that the stock plot works in “Pitch Perfect 2,” but not in sequels like “The Hangover Part II” or “Horrible Bosses 2?” Maybe its because the plot in the first “Pitch Perfect” was already pretty inconsequential. The dialog was so witty, the musical numbers were so lively, and the characters were so likable that the story was an afterthought. The story doesn’t really matter in “Pitch Perfect 2” either as the film delivers more consistently hilarious one-liners, aca-amazing music, and all the characters we adored from the first film simply interacting with one another.

In addition to the original players, “Pitch Perfect 2” naturally introduces several newbies too. Along with cameos from Snoop Dog and the Green Bay Packers, we get splendid supporting work from Keegan-Michael Key as a hotshot record producer, David Cross as the worlds biggest a capella fan, and Hailee Steinfeld as a wide-eyed freshman who just might takeover the Bellas someday. Screenwriter Kay Cannon also deserves credit for developing a legitimately funny group of bullies in Das Sound Machine, the German a capella team that pose a genuine threat to our heroines.

Speaking of entertaining antagonists, Adam DeVine returns as Bumper Allen. Previously depicted as an enjoyable jackass and rival, here he rises up as a love interest for Fat Amy in a romance that’s as funny as it is charming. Even if the backdrop can seem familiar at times, “Pitch Perfect 2” plays with its characters in new, fun ways. The film is given a ton of chances to take a cliché, meandering detour like when Beca almost storms off from the group. Instead of dragging out their reconciliation, however, the scene ends with a huge laugh and leads into one of the series’ more poignant moments.

After winning a Razzie along with twelve other directors for “Movie 43,” Elizabeth Banks is given a second chance to prove that she has a real eye for filmmaking. Banks raises the stakes with several musical set pieces, most notably the ultimate riff-off, and makes great use of her entire ensemble, which includes herself as commentator Gail Abernathy-McKadden. She’s made a delightful picture that even works in messages about inevitable change and sisterhood without going overboard in the girl power department. With a ton of passion in front of and behind the camera, what else can be said except, “Insert aca pun here.”