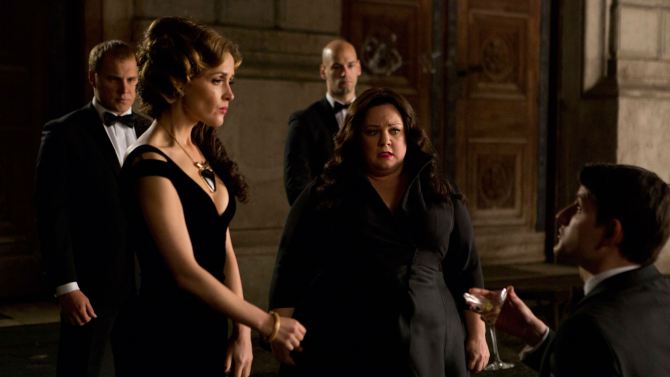 A satire of spy movies is nothing new. Between the “Naked Gun” and “Austin Powers” movies, you’d think that the concept would be officially exhausted by now. If Director Paul Feig and Melissa McCarthy taught us anything with “Bridesmaids” and “The Heat,” though, it’s that you should never judge a movie by its poster. “Spy” is yet another pleasant surprise that injects new life into a familiar premise with a compelling leading lady, a winning supporting cast, and one great one-liner after another.

McCarthy plays Susan Cooper, a CIA analyst who spends her days in a rat/bat-infested basement. Although she’s never been in the field of action, she acts as the eyes and ears for a dashing, debonair spy named Bradley Fine (Jude Law). While Susan guides Fine on a mission to locate a nuclear device, it’s discovered that a group of terrorists have the names of all the CIA’s top agents. With everyone else’s cover blown, Susan decides to step up to the plate and stop the bomb herself.

Whether in a mediocre comedy such as “Identity Thief” or a hilarious comedy such as this, there’s no denying that McCarthy has an unmatched gift for bringing down the house. McCarthy’s role here is perfectly tailored to her ability to be husky and crude while also being athletic and witty. Every second that goes by in “Spy” she’s trying to make us laugh and almost every time she kills it. McCarthy aside, the film also comes equipped with a dozen other players worthy of their own spinoff.

Helping our heroine are Miranda Hart as Susan’s colleague/best friend, Allison Janney as her sardonic boss, and Peter Serafinowicz as a slimy Italian contact with a slippery tongue. Rose Byrne previously established in “Bridesmaids” that she has a knack for playing characters that are lovable despite being mean-spirited. She brings that special charm to the role of Rayna Boyanov, a femme fatale looking to sell the nuke and eventually becomes a frenemy of sorts to the undercover Susan. A buddy comedy about Susan and Rayna would blow away “Hot Pursuit” any day.

Stealing the show is Jason Statham, who’s been in virtually every action picture of the past decade and a half. He has a ton of fun playing with his tough guy persona as a rogue spy so shamelessly hardcore that he’d make El Macho from “Despicable Me 2” raise an eyebrow. There isn’t a killjoy in the entire ensemble. Even the characters that are mostly played straight, such as Bobby Cannavale as a devious businessman, manage to get a couple good laughs.

Feig fires on all cylinders as a writer and director with inspired dialog and zany action sequences. What’s more, he avoids many of the excruciating tropes you’d expect from a movie like this. You keep waiting for a scene where Susan’s boss tells her to hand over her badge and gun or something, but Feig is too smart to rehash a cliché like that. Along with “Pitcher Perfect 2,” “Spy” demonstrates that female-centric comedies are mostly hitting it out of the park nowadays where male-centric comedies like “Entourage” fumble. This should only get us more excited for Feig’s “Ghostbusters” picture, which will star the likes of Kristen Wiig, Kate McKinnon, and of course McCarthy.