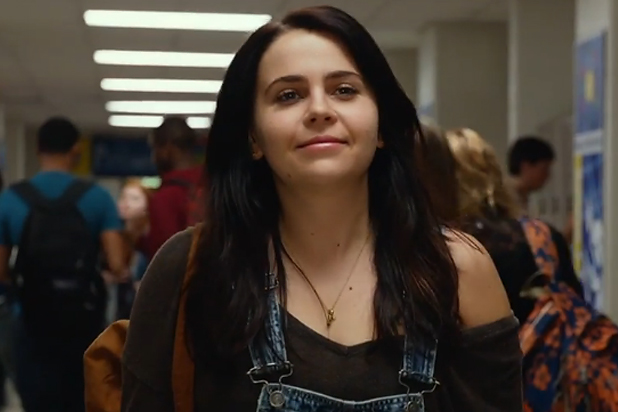 Hollywood gives many actresses the impression that if they’re not a perfect ten, they’ll never be more than a voiceover performer. Mae Whitman has done some marvelous voice work in shows like “Avatar: The Last Airbender” and “Teenage Mutant Ninja Turtles.” As far as her live-action roles go, though, Whitman is usually restricted to playing the weird outsider or the butt of a joke, most notably Anne Veal (aka Her?) from “Arrested Development.” While she excels at playing those parts, it’d be nice to see a character actress like Whitman score more complex roles. She finds the perfect star vehicle for herself in “The DUFF,” a film that asserts just because you aren’t considered a ten doesn’t mean you’re not beautiful.

Whitman plays Bianca, the short, stout, overall-wearing best girlfriend of two high school knockouts. Bianca begins to worry that she’s the DUFF in her circle of friends. If you don’t keep up with modern acronyms, D.U.F.F. stands for Designated Ugly Fat Friend. Determined to be more than a player on the bleachers, she seeks guidance from Robbie Amell’s Wesley, the hunky jock next door. From there, the plot is a bit like “She’s All That,” but infinitely smarter.

“The DUFF” features some winning secondary performances from Ken Jeong as Bianca’s teacher, Bella Thorne as a classic mean girl, and Allison Janney, who’s perfected the quirky mom archetype down to a T. This is Whitman’s movie, however, and boy does she shine. Whitman stays 100% committed to whatever the filmmakers throw at her, but she’s never mean-spiritedly humiliated or degraded. This movie respects its main character and doesn’t try to change who she is. Whitman thus creates a heroine that’s identifiable, awkward, and lovable in every way.

At times, “The DUFF” demonstrates the potential for a great high school comedy such as “Mean Girls” or “Easy A.” There are a few problems, though, with Josh A. Cagan’s witty, yet familiar, script. We have to put up with a ton of lame conventions involving misunderstands, seemingly nice guys that turn out to be jerks, and Bianca creating some forced tension with her friends. Then there’s the climax at homecoming, which does admittedly lead to a nice, heartfelt conclusion. Of course you don’t have to be a rocket scientist to know how the movie will resolve itself.

It takes talented people to make clichés like this work. Fortunately, Whitman and Director Ari Sandel, who won an Oscar for his short film several years ago, are more than up to the task. Although it doesn’t provide groundbreaking commentary, “The DUFF” is a funny, earnest, and insightful picture about being yourself. This can be especially hard in an age of cyber bullying and size zero models plastering billboards. That’s just one of the reasons why we could use a movie like “The DUFF” and a star like Whitman right about now.