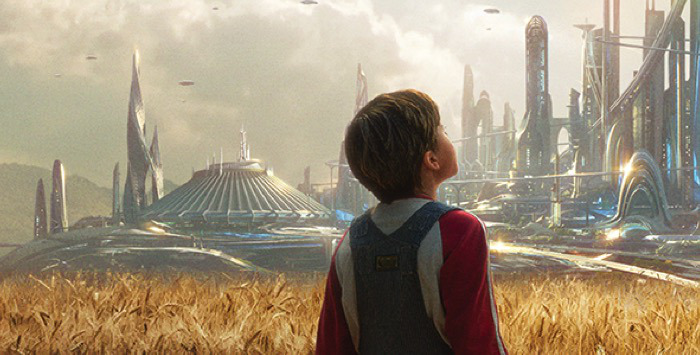 Like “Pirates of the Caribbean,” “The Haunted Mansion,” and “The Country Bears,” “Tomorrowland” is inspired by a popular Disneyland attraction. Where the latter films take place in worlds where Disney doesn’t necessarily even exist, however, “Tomorrowland” finds a way to work Disneyland into its narrative. Right under the It’s a Small World ride is a portal that can take you to a real futuristic wonderland. You conspiracy nuts thought Disney was harboring unbelievable secrets already? Walt’s frozen head was only the tip of the iceberg!

Britt Robertson gives a charming performance as Casey, a teenager who would rather spend her time shaping a brighter future rather than dwelling on past mistakes. Casey finds out that she can indeed make a difference upon picking up a mysterious pin and receiving a glimpse of Tomorrowland, a place where our greatest hopes for the future have come true. She soon meets Athena, a sophisticated little girl played by Raffey Cassidy, who’s reminiscent of Lindsay Lohan before she…um, “matured.” Eventually they team up with George Clooney’s Frank, a surly inventor who’s lost confidence in humanity’s fate. Together, though, these dreamers might realize the World of Tomorrow today.

Tomorrowland itself is a wonderful interpretation of what EPCOT thought the future would look like in the 1960s. While a lot of it is brought into fruition by obvious CGI, Director Brad Bird’s vision is always energized, vibrant, and complete with a thrilling musical score from Michael Giacchino. You can just completely lose yourself in this awe-inspiring environment. The downside is that “Tomorrowland” spends much of its time in our present, which isn’t nearly as exciting by comparison. Even in its modern set pieces, however, “Tomorrowland” does offer plenty of creative action, innovative ideas, and fun performances.

While “Tomorrowland” will never have you checking your watch, it does occasionally leave you wanting more. The film has a good sense of humor about itself, but it’s not consistently laugh out loud funny. The characters are all likable, but they aren’t timeless heroes. The story is ambitiously awesome, but the pacing can feel unbalanced. The message is an inspirational one for young people, but it’s sometimes presented in a The More You Know PSA fashion. There are also several plot points that don’t make a ton of sense even by retro sci-fi standards, but I’ll let CinemaSins nitpick those little details.

Seeing how Brad Bird’s flawless track record includes “The Incredibles,” “Ratatouille,” and “Mission: Impossible – Ghost Protocol” just to name a few, we expect the world from “Tomorrowland.” Bird doesn’t deliver the world this time, but he does give us smart, heartfelt, inventive family fun. That’s more than can be said about “Jupiter Ascending” or “John Carter,” which won’t jog anybody’s imagination. It’s a good flick overall and, much like Disney’s “The Rocketeer” or “Flight of the Navigator,” has real potential to get even better with time. Until then, heed this movie’s morals: Think about today to make tomorrow better and also buy some “Iron Giant” merchandise while you’re at it.