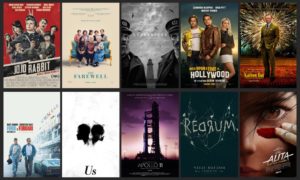 2019 has been a continuing year of great diversity in front of and behind the camera. In no way is the issue of diversity solved for good, but it’s a delight to see great films on this list like Jojo Rabbit and The Farewell receive the recognition and exposure they deserve. It’s not definitive, but one could look at these two films as measured, if not subconscious, responses by their respective filmmakers to the current tirade of ignorant messages of hate in the world. Either way, this list contains the films that, for me personally, fully utilized the complete toolbox of the filmmaking process and pushed the medium to new heights.