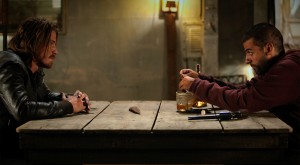 Oscar Isaac is on fire. The half Guatemalan, half Cuban actor is Hollywood’s next big thing, despite still living in Brooklyn. 2015 saw this prolific actor accepting a role in Star Wars as the courageous fighter pilot Poe Dameron, as well as cast as an unethical billionaire inventor in Ex Machina. Playing these polar opposite characters highlighted his skills and have helped to raise his profile among the movers and shakers of the film world. His latest big role in Mojave has him turning towards the dark side as a homeless stalker bent on murder. He is as convincing in this role as he was in his more heroic Star Wars persona.

Mojave is a dark and brooding look at the world of Hollywood and the selfishness and ennui it inspires. Isaac plays a drifter named Jack, and is supposedly the antagonist. However good and bad are muddled in this film, with a protagonist, played by Garrett Hedlund, who is just as morally bankrupt as the villain. He is successful but bored, and has no regard for the people around him.

The two men meet for the first time in a desert, where conversation turns into a brutal assault on Jack. Hedlund’s character Tom, who is a writer himself, then takes off and manages to kill someone else on his way back home. Jack witnesses the murder and this, combined with his own assault, is enough to set him off in pursuit of Tom. The rest of the movie is a chess match between the characters, with each trying to torment and kill the other.

The film is both directed and written by William Monahan, and was produced by A24 Films and DirecTV. As a writer-director himself, it is hard not wonder how much of his own personality Monahan has infused into the character of Tom. It is perhaps this lack of distance that hurts the film in the end. Mojave descends into naval gazing at times, and neither Tom or Jack are particularly likeable, leaving the audience no one to root for. Though Isaac plays his role with the same passion he has brought to all his other films, that is not quite enough to save the film. The palpable tension between the men when they are both on screen helps drive the action, but at other times the pace lags. Louise Bourgoin as the girlfriend and Mark Wahlberg as a business partner also do their best with what they are given, but in the end just add to an unsympathetic cast of characters.

It is not all bad, however. Beautiful shots of the desert combined with an insider’s jaded look at the Hollywood film machine do provide viewers with moments of interest. It is easy to believe that some of the excesses shown in the film are based on the writer’s own experiences. A western style musical score that plays throughout the film also helps to tie the earlier scenes in the desert to the city landscapes, as well as ratcheting up the tension. The two lead actors have definite chemistry, and it is fun watching them spar both verbally and physically. Isaac in particular manages to infuse his character with a hypnotizing air of mystery and menace.

In the end, this is a film that is almost brilliant but doesn’t quite make it. Solid acting and elegant cinematography aren’t quite enough to save the script from unlikable characters. Critics on the whole have been torn on how to classify this dark thriller. Fans of Isaac will enjoy his performance, however, as it is different from any other role he has played thus far. This film may not surpass Star Wars as a fan favorite, but will certainly earn some admirers of its own.