Of all the award-winning novels that could be adapted to screen, Emma Donoghue’s 2010 bestseller Room proves to be one of the most challenging to portray. For one thing, the story is told from the point of view of five-year-old Jack, a boy who lives in complete captivity in a single room shed with his mother, never seeing the world outside of “Room.” And it is difficult to portray the sort of emotions that a child may tackle when he finally gets the chance to see the world outside – a challenge that may prove to be too much for a child actor. However, a talented cast and subdued direction make Room one of the most poignant, alarming films of this year’s festival circuit. 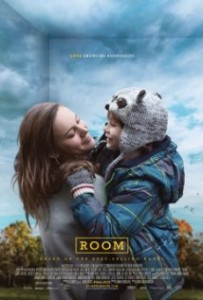 Room, from A24 Films and DirecTV, revolves around the day-to-day life of Jack and his “Ma” (who was unnamed in the book but is called Joy in the film), who live in the isolated, soundproofed shed in “Old Nick’s” backyard. Joy, kidnaped at nineteen, does her best to raise Jack as a normal and healthy boy, making sure he exercises, learns how to read, and brushes his teeth. She knows that their chances of leaving Room are small, so she tells Jack that Room is their entire world and everything outside is just make-believe that they can watch on their TV.

When Joy learns that Old Nick may lose his home, she knows he would rather kill them than set them free, so she plots their successful escape. The latter half of the film shifts to “outside,” where Jack must assimilate to the real world while Joy must catch up on all that she has missed in her seven years of captivity.

In a film that takes place in such an isolated location, a strong cast is a must. The standout star is Brie Larson as Joy, who has already showed her aptitude for quiet, suffering, strong roles in 2013’s Short Term 12. The gamut of emotions, from fear to anger to relief, are easily accessed by an actress of Larson’s caliber, and she remains the heart of the film.

Following closely behind is newcomer Jacob Tremblay as Jack, the narrator of the film. To ask a child actor to carry such a role is no small feat, but Tremblay succeeds on many levels, especially when showing Jack’s fear and confusion regarding his big new world. Larson and Tremblay carry the bulk of the film together, both in Room and out of it, with sparkling supporting bits from Joan Allen as Joy’s mother and Sean Bridgers as Old Nick.

From the trailer to the feature film, Room is a filmmaking success. While the directing and camerawork borders on bland at some points, the cast and script more than make up for it. Room won the Toronto Film Festival’s People’s Choice Award, forecasting both award and audience success, and Larson’s performance is already generating Oscar buzz. There are no fireworks or special effects to wow audiences in this film, but the strong, powerful bond between mother and son in face of unreal adversity is enough to capture any audience’s attention.