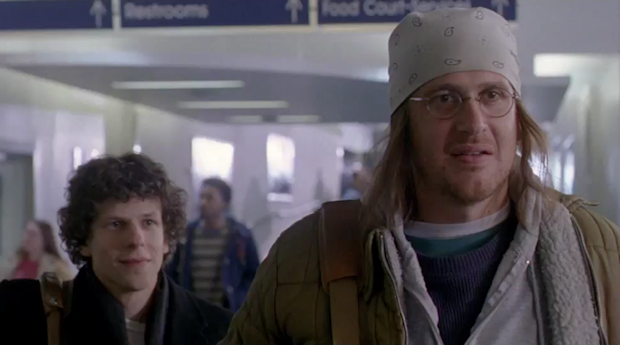 Director James Ponsoldt (“Spectacular Now”) is originally from Athens, Georgia and was educated at Yale. He is a recent graduate of the MFA film program at Columbia University in New York. While pursuing his undergraduate studies he was deeply influenced by a massively acclaimed 1,079 page comic novel titled “Infinite Jest” by David Foster Wallace. His latest film is based on a five-day conversation held in 1996 between a “Rolling Stone” reporter named David Lipsky (Jesse Eisenberg) and author David Foster Wallace (Jason Segel) on the last leg of a publicity tour for his novel.

Mr. Wallace, who was considered one of the best and brightest writers of his time, killed himself, at 46, after enduring the demons of severe depression in 2008.Post his death, Lipsky went ahead and released his never published interviews as a book, “Although Of Course You End Up Becoming Yourself” on which the film is based.

Donald Margulies, a Pulitzer Prize-winning playwright (“Dinner with Friends”) envisioned this as a road movie and not a biopic and wrote the screenplay accordingly. Ponsoldt, who was a former student of Margulies at Yale, got the screenplay from him and saw an unrequited Platonic love story.

What makes the film work so effectively is the amazing, low-key performance from Jason Segel who humanizes Wallace and makes him charismatic. We watch and “act as a fly-on-the-wall”as Lipsky and Wallace travel by car, bus and jet trying to understand one another and develop a bond of friendship and trust. As we learn more about these men we get sucked into a vortex of emotion and feeling. Ultimately what plays on screen is a revelation about art and life.

The film premiered at Sundance 2015 to critical praise and is being released by A24.