“Fast fashion” is a business model that encourages people to buy unnecessary amounts of disposable clothing that will be worn only a few times. It moves clothing as quickly as possible from expensive runway items to cheap knock-offs. For example, a high-end store like Eileen Fisher might sell a cotton tank top for over $100, while a fast fashion store like H&M might sell a similar-looking shirt for about a quarter or fifth of the price. That may sound like a bargain – but while the Eileen Fisher shirt can be worn multiple times, the H&M shirt is likely to fall apart after a few washings. Obviously, such poorly made clothes end up in landfills and thus contribute to waste. 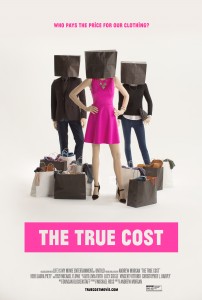 In addition, such clothes are generally made from materials that are disrupt the Earth’s ecosystems. Many are made from polyester or nylon which are both made from petrochemicals. In other words, they’re made from oil. Nylon production also generates a lot of nitrous oxide, a greenhouse gas that contributes to global warming. In fact, according to Ohio Gas, clothing production is responsible for about 10 percent of the world’s total greenhouse gas emissions.

The new documentary, The True Cost, describes the environmental and human rights costs of fast fashion. Most of the clothes are made in third world countries like Bangladesh where garment workers get paid $3.00 a day for their labors. Bangladesh was also the site of a building collapse in 2013 that killed over 1,000 workers. It was that tragedy that inspired director Andrew Morgan to question where the clothing he liked to wear came from and who had made it.

One of the film’s producers, Lucy Siegle, is also the author of the 2011 book To Die For: Is Fashion Wearing Out the World? In it, Siegle, who describes herself as an “ex-fashionista,” discusses the human cost of cheap clothing. A particularly unsavory aspect of fast fashion is the use of child labor. To Die For describes teenagers picking cotton in Uzbekistan, while Morgan’s movie depicts a little girl hard at work while her little brother lies limply on the floor. Another producer, Livia Firth, is the creative director of Eco-Age, a consulting firm that helps companies find and develop more sustainable ways of doing business. She also established the Green Carpet Challenge which encourages designers to use sustainable materials and methods to make looks fit for the red carpet.

True Cost depicts the actual environmental and human cost of cheap clothing. The movie juxtaposes sleek runway models with the squalid conditions that garment workers live and work in. Those conditions are bad for their health; cotton workers in Texas are more susceptible to brain tumors than the general population while cancer and birth defects are increasingly and appallingly common in parts of India.

Most of the workers are girls or women, and they labor in hazardous, filthy and demeaning conditions. The infamous building collapse in Bangladesh was not a unique event – there have been other, similar disasters. The movie also describes the development of fast fashion as a betrayal of the promise of globalization. The original belief behind globalization had been that wealthy countries would benefit by getting less expensive goods while poor countries would be able to offer their citizens jobs that offered living wages. Unfortunately, only the first promise was kept.

The filmmakers do suggest ways to try to solve the fast fashion crisis, and they generally boil down to shopping more thoughtfully. Their first suggestion is likely the most important: Ask yourself if you plan on wearing something 30 times before buying it. Doing so will help the consumer reject the ultra-trendiness of fast fashion that tells people they are behind the times if they wear clothing that’s so much as a week old. Even more importantly, it will force the consumer to examine the item more closely to see if it will last 30 washings. Companies that sell clothes that fall apart after one or two washings should not be rewarded with people’s business.

The True Cost is the latest in a slew of recent documentaries that show the ramifications of rampant consumerism. Such films can be startling and eye-opening; at their best they encourage people to make wiser decisions about how and where to spend their money.