Český Krumlov, the Czech Republic’s answer to Camelot, is so fairy-tale perfect you half expect mini-chiclets to rain down on its cobbled streets. Marionettes deck the panes of its gingerbread shops. Bears roam a castle moat. And the town’s very name describes the bend in the Vltava River that rings this UNESCO World Heritage Site dating back to the 13th century. 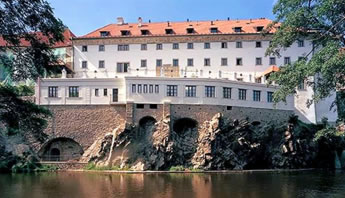 It’s no wonder Hollywood came here to shoot The Adventures of Pinocchio and opening frames of The Illusionist. All that’s missing in the medieval fantasy set is a green ogre. Český Krumlov’s mediating role between filmed artifice and real world makes it an ideal junction after summer’s cinema rites in another corner of Bohemia, the Karlovy Vary International Film Festival.

Yet unlike the spa town of Karlovy Vary (Carlsbad), this South Bohemia destination lacks thermal waters to drink in or splash about. The closest thing is the indoor pool, sauna and solarium of its five-star Hotel Růže, housed in a 16th-century Jesuit monastery and university.

Given an extensive face lift in 1999, the hotel plays up its Renaissance heritage while offering modern creature comforts. Růže’s 71 guest quarters are done up in faux antique wood and old world flourishes from chandeliers to tapestries that bring sojourners back to gentler times without the hassles. Take or leave the armored figures that hold sentry in the vaulted lobby bar or the throne-shaped toilets that further suggest medieval theme park, the historic property offers up an atmospheric stay, a sound night’s sleep and a breakfast spread fit for a king.

Literally. King of Sweden Karl Gustav XVI has scrawled kind words in the hotel guest book, as has a host of other celebrities, from former President of Ireland Mary McAleese and Russian chess master Garry Kasparov to Czech filmmaker Miloš Forman and his pal, former Czech President Václav Havel. Though the current economic downturn has manager Marie Mrzenová concerned about the coming year’s bookings, she hopes to continue luring cultural enthusiasts from Asia, the US, Australia and England who love getting in Renaissance drag for the Růže’s hallmark Rožemberk feast reviving the music, food and merriment of the town’s noble ancestors.

One well documented visitor to the Růže was Edward Beneš, Czechoslovakia’s first secretary of state after WWI and second president, from 1934-1948. His bust in the ground floor gallery is one of the country’s earliest memorials to this architect of the postwar expulsion of Sudeten Germans to Germany. In step with many of his compatriots at the time, Beneš concluded that the bad blood stirred by the 1938 Munich Agreement claiming the Sudetenland for Germany—which was favored by most ethnic German locals yet deplored by the displaced Slavs–doomed any hopes of the two groups making nice on shared national soil.

In their current film project about the Munich Agreement, perhaps Růže patrons Forman and Havel will opt to reenact Český Krumlov’s drama under Hitler, who local guide Jiří Václavíček notes stood in Old Town Square, a mere skip from the Růže.

When he’s not leading tours, debating the virtues of Eggenberg vs other Czech beers or blogging about politics, Jiří is busy managing Castle View Apartments, also a quick stroll from the Square. 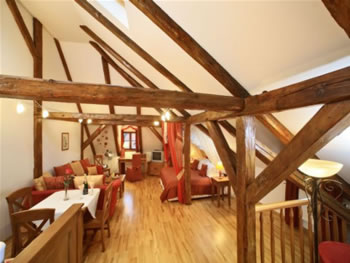 Originally a house for several families, the seven-unit aparthotel feels homey, if your home is airy, elegantly appointed and happens to look out on a candy-hewed castle five centuries old. Wooden interiors are sleekly modern while creating what Jiří describes as “an ambiance that fits the town.” A generous kitchenette and dining space join with a living room and separate bedrooms to unite vacationing families under one roof “so your children are under your eye,” quips the soft-spoken father of two. Honeymooning couples also form the Castle View Apartments clientele, which, judging by the multilingual raves that fill the guest book, frequently cite it as the highlight of their travels.

A complimentary breakfast is served across the street, just next to a vintage pub instructively named Tavern in Šatlavska Street. Its grotto ceiling, open grill and flavorful soup served in hollowed bread more than compensate for the smoke damage you’ll do to your lungs here.
To experience the atmosphere of another popular haunt, The Gypsie Bar, simply bring a gas mask.

(Whatever your take on the Beneš Decrees that left Bohemia a zone of ghost towns, the Roma who came after brought with them music and dance that spice today’s local culture. Deal with the guilt later.)

For cleaner air and meatless cuisine, there’s Restaurant Laibon a few alleys away. As more and more enlightened troughs pop up, it’s only a matter of time before the town ranked by National Geographic Traveler as the world’s 16th most beautiful historical place knocks French tourism for a loop. So where were you planning to go after the Cannes film festival…?