The Academy’s verdict is in: the five films still in the “Best Foreign-Language Film” race are Beaufort (Israel), Mongol (Kazakhstan), Katyn (Poland), The Counterfeiters (Austria) and 12 (Russia). Eklavya, India’s official submission, Eklavya – The Royal Guard is out. But not forgotten. Bollywood annually cranks out about 1,200 films a year, with spectacles and stars that rival our biggest TomKats and Branjelinas, and now the Bombay-based industry is establishing toeholds around the U.S. So while the world’s most popular form of entertainment won’t be repped with a statue come February 24, its entry from Vidhu Vinod Chopra surely deserves consideration. 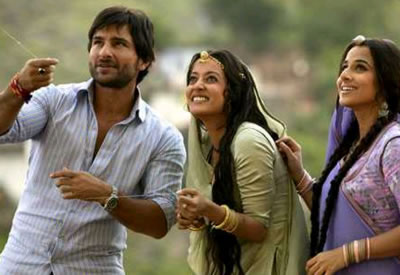 The beginning sequence in Eklavya: The Royal Guard recounts a legend from the Hindu literary epic, Mahabharata. It’s not the jolt some viewers need, and you might say the director, Vidhu Vinod Chopra, opens on his guard. But soon the ancient tale–of low caste archer Eklavya severing his thumb not to outshine a god’s royal protegé—bleeds into present day India with a splat of gore that revs the film’s metabolism.
Now set in a Rajasthan palace, this lush Bollywood production reboots with Eklavya (Amitabh Bachchan) as aging royal guard of a disempowered king (Boman Irani) who strangles his ailing wife (Sharmila Tagore) on learning that Eklavya is the true father of his heirs. This stirs up a masala of foul play and grief that draws the prince, Harshwardhan (Saif Ali Khan), back from London and plunges our overheated royals into chaos.

If you’re expecting fully fleshed characters here, you’ll be disappointed with the storybook templates adorning the screen. Chopra brings together an all-star cast to tell a morality tale. Conceived seven years ago in an era of rising fanaticism, Eklavya challenges the blind dharma, or duty, displayed in its opening myth, and argues instead for a dharma of individual truth and intelligence that would make Nietzsche proud.

India’s official Oscar submission blends elements of melodrama and thriller that play no less like a myth than the curtain-raiser. Cued by the mythical aura, the audience lets realism off the hook and goes along with the suds.

With a lesser conjurer, this sort of spectacle could quickly get out of hand. But Chopra takes his tone to the edge of big and checks it from veering over the top. The result is an idiosyncratic art film crossed with commercial crowd pleaser that makes Eklavya more than just compulsively watchable.

Chopra and co-writer Abhijat Joshi took five years to write the script. Joshi is an English teacher, and by all indication a huge fan of the Bard. Early on, the sonnet, Shall I Compare Thee to a Summer’s Day? hints at some of theShakespearean moments to follow: Othello’s contribution includes a murdered wife whose scarf is linked to romance; King Lear inspires a confrontation between the film’s eponymous royal guard and prince Harsh, who, in a quote from Macbeth, sights blood on his hands; and from Hamlet we get an order of brooding with our prince, plus an Ophelia act-alike and a couple of Rosencrantz and Guildenstern-like plotters angling to do in the regent.

Something may be rotten in this Rajput state, but nothing too grave to allow for a pun. Riffing on the Hamlet homage, a character admonishes, “Time and tide wait for no man,” a line from Canute the Great, son of a Danish king. Chopra loves a good treasure hunt, and seeded throughout his film are hidden references just waiting to be cracked.

Take for example the queen’s bindi. When Her Highness urges a dharma of reason, her forehead dot fills the screen. Those in the know are reminded of its placement between the eyebrow and the sixth chakra, the site of “concealed wisdom.” It’s a sly way of saying the queen is at the film’s moral core.

That her bindi morphs into a full moon means her quest for truth lives on, from the moon-themed song that’s tagged with her to the many moonlit scenes where literal and figurative reflection takes place. In this cosmogeny of double entendres, the sun, by contrast, is all bluff and bombast. Its golden rays emblazon the official seal of this impotent kingdom, and they’re also a scathing visual code for blind tradition. It’s no coincidence Eklavya is blinded by the sun.

Music too gets in on the winks. In the climactic scene, Eklavya must decide between protecting the sovereign (the duty of the royal guard) and letting his son live. The Saraswati chant that swells as Eklavya pits rote versus reason belongs to the goddess of knowledge, music and the creative arts, who was also a store of creative intelligence for the Hindu god of creation, Brahma.

For all the hidden meanings, Chopra plainly wants viewers to distinguish between right and wrong. In Bachchan, he has a commanding evangelist. The Bollywood veteran reins in his performance, and manages to convey passionate conviction through the burn of an eye. Saif Ali Khan kicks up his own heat as avenging angel and devilishly handsome prince, and however outsized his dilemmas and actions, he holds our intrigue for the duration. Comely Vidya Balan plays his non-royal love, Rajjo, with the grace required to make us believe that if anyone could bridge the caste gap, she could. As the “untouchable” chief of police, Sanjay Dutt is mostly cartoonish, yet he’s the very portrait of sobriety compared to Raima Sen, who mistakes Harsh’s mentally unstable twin Nandini for a giddy sorority sister.

Happily, Nataraja Subramanian’s cinematography more than makes up for any missteps of the actors or the at times clunky exposition they mouth. Especially memorable is a murder that goes down on a nearly black screen and another that has a camel stampede for its backdrop. By turns luxuriant and menacing, the camera beautifully suits the film’s epic themes.
With help from the royal family of Jodhpur, costumes and sets enhance the mood of a contemporary legend here and there caught in a time warp. With the noted exception of a pesky subplot involving peasant unrest in the kingdom, Eklavya explains why the director of nine films is as celebrated for his poetic flourishes as he is for his perfectionism.