It’s Baron Cohen’s commitment to the character and no wink to the audience that still captivates. 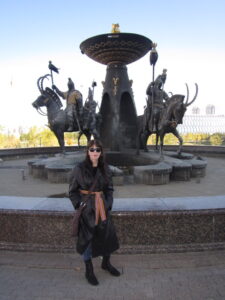 Last year, in October 2019, I spent 3 weeks traveling through Kazakhstan, Kyrgyzstan, Tajikistan, Uzbekistan and ended up in the showstopper country, Turkmenistan.

A dictatorship or a highly polished jewel?

To get an advanced viewing of BORAT SUBSEQUENT MOVIEFILM, I had to make several vows (but no branding) which limits my review to generalities. No spoilers, no cast members and no twists. All critics must use the entire title (or some form of it but cannot identify it as “you know what”). Well, I could write about the not-surprising $2 billion dollar collapse of Quibi or the defrocked legal analyst, Jeffrey Toobin. What a priceless, self-sacrificed humiliation – in both cases.

It’s been fourteen years since we have seen Borat (Sacha Baron Cohen) from the glorious Nation of Kazakhstan. And I can confirm that it is indeed a fascinating and very beautiful country. I saw no peasants and no livestock being nursed by human females. (Though I did see this when I was traveling through Papua New Guinea.) I spent a great deal of the Kazakh tenge (1 Tenge equals .0023 USD) on robes and handbags. By Day 2, I had filled up two suitcases and had to go to an outdoor market to buy another big suitcase strictly for shopping.

Fourteen years? It took Bill and Ted’s writers 31 years to come up with a story. And it was a pretty lousy and sleepy-headed one. Thank God the writers decided against having Bill and Ted abducted by Reptilian aliens from the Draco constellation.

Its been 20 years since Neo draped himself in his monk-prince, Mandarin-collared black trench coat. Who is next? Will Al Pacino return as Tony Montana? It has only been 37 years since Tony supposedly died. It was his double!

That guy who played Luke Skywalker in 1977 has been resurrected. He’s everywhere now.

Since Borat captivated America with his shameless naïveté and unabashed pleasure at our absurd lust for flesh and power, the worm has turned. How can anyone make fun of everyday Americans when the country has been killing off all the canaries before they even hit the coal mines.

Borat is too famous to fool anyone in America’s backwater towns. So Borat has to wear Halloween costumes as he returns to the U.S. to make peace. His task is to bring the renowned Kazakh Minister of Culture, a monkey, to Mike Pence as a gift. Borat’s 15-year-old daughter, Sandra Jessica Parker Sagdiyev (Maria Bakalova), slips into the crate with the monkey. The sad tale to the end of Kazakh’s Minister of Culture forces Borat to gift his daughter to Vice President Pence instead. But first, she needs a bath and a pair of flip-flops. Unlike Ted’s teenage daughter, who channels his mannerisms and vocal stylings, Sandra has not inherited Borat’s distinctive clothes sense or blistering enthusiasm for America.

Kazakh’s Minister of Culture follows the example set by Roman Emperor Caligula. He indulged his favorite racehorse, Incitatus, with his own staff, house, and stable. Then Caligula topped himself by assembling the Senate and announcing he intended to make Incitatus a consul. 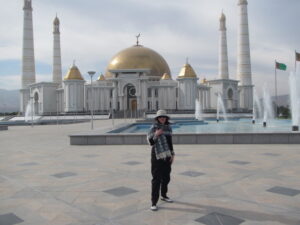 Turkmenistan’s President Gurbanguly Berdymukhamedov serves as the head of one of the most authoritarian and secretive regimes in the world. Human rights violations are routine and severe, and the right to freedom of expression is severely restricted – yet I spent days traveling through Turkmenistan. If we were watched and followed, I constantly praised the president and its friendly people. The term “dictator for life” and “human abuse” is part of every discussion of the country. Yes, it was very difficult to enter the country and in the whole of 2016, just 6,000 foreigners visited Turkmenistan, including those who came to the country as part of official delegations. 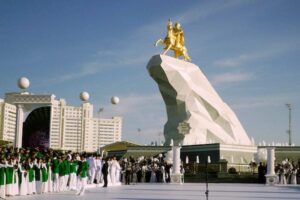 Berdymukhamedov’s imposing image is everywhere.The capital, Ashgabat, has a 68-foot gold-leaf statue of him on top of a horse on top of a marble block. The capital is a masterpiece of one man’s vision, a white city of marble. (Photo insert) Like the pharaohs of Egypt and monarchs that ruled the world the hundreds of years, no one voted on building Versailles, or the Dame or the Coliseum. The great palaces and monuments all over the world, hailed as UNESCO World Heritage Sites, were projects driven by one man’s demand for glory through time. Ancient Egyptian farmers did not vote on the building of the Great Pyramid at Giza.

It’s a shame Berdymukhamesov doesn’t permit more tourists to experience his dazzling, energy-rich country with its magnificent white-only marble buildings. Because of Turkmenistan’s vast natural resources, it will be a vital presence in the world’s future orchestrated by one man’s totalitarian vision. And only white cars are permitted in the capital.

While we laugh at the way people react to Borat and Sandra and say inappropriate things, we must admit that under similar circumstances, we would probably smile and nod instead of cursing at them and throwing them out the door. We don’t challenge strangers. We do not engage in an encounter that might lead to violence. As far as Baron Cohen encouraging people to say exactly whatever they want, at least for the moment, they can. In Thailand, like several other countries, Lèse majesté states that it is illegal to defame, insult, or threaten the king, queen, heir-apparent, heir-presumptive, or regent.

Regardless of the imposed embargo on reviews and Amazon’s quest to keep certain scenes in BORAT SUBSEQUENT MOVIEFILM secret, the appearance of Rudy Guiliani being faux interviewed by Sandra has overtaken the news. President Trump is understandably jealous. It is crucifying that the once hailed Mayor of the Country voluntarily flirted, touched and followed a “journalist” into a bedroom and flopped himself on the bed. Putting his hand down his pants was his personal rapid decent into Hell.

The brilliance of Baron Cohen shines when he sings his racist song, giving his audience a sing-along refrain. It should become a rap anthem.

There’s a rule that only so many names can be added to the writing credits for a book or a movie. I do not know exactly what any of BORAT SUBSEQUENT MOVIEFILM writers contributed to the movie, but each screenwriter had clout and their agent’s skill to be listed in the credits: written by Sacha Baron Cohen & Anthony Hines & Dan Swimer & Peter Baynham & Erica Rivinoja & Dan Mazer & Jena Friedman & Lee Kern.