We get to see Amy’s whole world. An honest, revealing and unflattering account of Schumer’s painful pregnancy 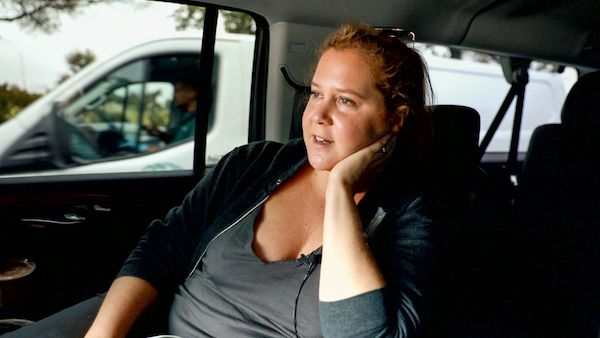 “I f****n’ love being pregnant,” Amy Schumer says after she’s puked. There’s a lot of puking, and then some, in EXPECTING AMY, a three-part HBO MAX Original docu-series covering nine months of the comedienne’s very-uneasy pregnancy while preparing, practicing, touring and recording her Netflix stand-up special GROWING.
I can’t help but like Amy Schumer. She’s a  ‘Sex Comic’ and loves that moniker — Amy knows she’s sexy even if she’s not the anorexic-type actress she claims that Hollywood demands from their female movie stars. EXPECTING AMY is no puff piece, either. We get to see Amy’s whole world. Puking, peeing, childbirth. An honest, revealing and unflattering account of Schumer’s painful pregnancy.
In EXPECTING AMY, Schumer bares it all. Literally! She’s puffy-eyed most of the time, always tired, with absolutely no trace of makeup, and appears fully naked! More than once! Schumer confides to the camera of her depression. Pregnancy ain’t easy. Amy has hyperemesis. She vomits “an Exorcist-amount” which happens in practically every other scene.
Amy shows us what it’s like to develop a Standup act — she comes up with jokes, tries them out at the local comedy clubs, figures out what the audience responds to (the “back the garage to the car?” punchline is from friend Jerry Seinfeld), tours the U.S., films the one-hour special GROWING — all the while being pregnant!
The series co-producer, Chris Fischer, is a famous chef and Amy’s husband, who ”married a Chef because I’m a f***ing genius.” She describes how they met, falling madly in love, their marriage on a Malibu beach (“I’m so happy for you that you found me!”). Amy on-camera pees once, but Chris is shown peeing a few times. Chris doesn’t have a normal brain, Amy realizes, and the doctors diagnose Chris with Asperger’s Syndrome and he’s on the autism spectrum. Some of his character traits appear as jokes in Amy’s act.
There are intimate moments between the two, and there are arguments: Amy berates Chris while he’s driving and fixated on his GPS cell phone. When Chris draws an unflattering picture of Amy (he thinks it’s an accurate portrayal) she shows it to the audience in her stand-up act. “I look like Trump!” She screams. Watching Amy from the audience Chris looks visibly uncomfortable with the joke, and afterwards they have an argument about it. Any tells Chris “my stand-up is not more important to me than our marriage. Remember that I’m f***ing sick, and that I’m pregnant… we just need to get through this together, and you need to just not get cold, and not get numb.” They hug each other, cry, and everything is forgiven.
EXPECTING AMY is not what you’d “expect” of Amy Schumer. It’s the real Amy, and we love her even more.
EXPECTING AMY
An HBO Max Original
With Amy Schumer, Chris Fischer, Jennifer Lawrence, Jake Gyllenhaal, Jerry Seinfeld, Colin Quinn
Produced by Chris Fischer and Amy Schumer
Directed by Alexander Hammer
3 Episodes / 3 Hours