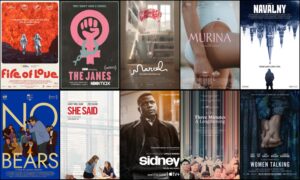 Although the in-person box-office returns may not be what they once were, pre-pandemic, I was definitely one of the folks returning to theaters this year, whether for press screenings, film festivals, or even as a paying customer. While I may not have quite averaged a movie a day, I still watched close to 300 works of moving-image media (granted, some of these were older films and shows). And yet I have still not watched everything that I wanted, including Brett Morgen’s documentary about David Bowie, Moonage Daydream.

I already posted a list of my 10 favorite documentaries and 10 favorite fiction films over at Hammer to Nail (HtN), where I am lead critic. I will soon, on my blog, as I always do, publish a longer list, with additional runners-up and honorable mentions. Below, you will find 10 movies—5 docs and 5 fiction, in alphabetical order—mostly drawn from the HtN list but with one new film added from among the titles viewed since that list was published. Where I have previously reviewed a film, I hyperlink the titles to that review (whether on this site or at HtN). For the two films I did not get a chance to review, I write a brief capsule of my thoughts. Enjoy!

• Marcel the Shell with Shoes On (Dean Fleischer-Camp): A feature-length adaptation of stop-motion short films created over a decade ago by Dean Fleischer-Camp and his then-spouse Jenny Slate (The Sunlit Night), Marcel the Shell with Shoes On follows the eponymous character (voiced by Slate) as he struggles to find his lost family. Isabella Rossellini (Land of Dreams) lends her talents as the voice of Marcel’s grandmother, Nana Connie, the one relative to have escaped a tragic relocation. The movie offers 90 minutes of poignant whimsy, all of it inducing genuine laughter and tears. If it doesn’t move you, I fear nothing will.

• She Said (Maria Schrader): Based on Jodi Kantor and Megan Twohey’s New York Times investigation into the crimes of now-imprisoned movie mogul Harvey Weinstein, She Said avoids trafficking in the lurid details of sex crimes to instead focus on the resilience of the targeted women. Zoe Kazan (The Big Sick) and Carey Mulligan (Promising Young Woman) star as Kantor and Twohey, and though they each do a wonderful job, it is the many other actors appearing for but brief onscreen minutes as Weinstein’s victims who make the movie soar, their heartfelt, gut-wrenching performances reminding us of the profound human cost of allowing perpetrators to remain unpunished. Quietly powerful, She Said makes us listen through those women’s words, along with the brilliant writing and mise-en-scène.