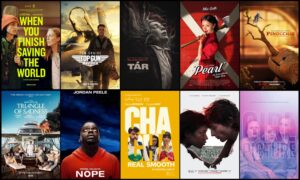 At the end of each year, I am earnestly taken aback by the amount of joy a year’s worth of movies were able to provide me. This year, perhaps, I feel this even more than usual. Ranging from a neo-Western alien movie to a cannibal love story to Hollywood’s largest blockbuster, the movies of 2022 showcased the diverse wealth of talent found across all scopes and levels of filmmaking. Below are the ten works which I have connected to the most, although these are only a fraction of the stories that have made this year feel so special.

• TÁR (Todd Field): Todd Field returns to the screen with a pitch-perfect screenplay that handles complex ideas, such as cancel culture, the genius myth, and the transcendence of art, with tact, intelligence, and incredible nuance. Hosting a career-best performance by one of today’s best living actors, Cate Blanchett, TÁR creates biting characters and a masterfully controlled atmosphere that is equally beautiful and horrific.

• Pearl (Ti West): In this follow-up to the striking film, X, that just came out in March of this year, director Ti West and lead Mia Goth return with a fresh perspective on one of the year’s most compelling characters. In a screenplay co-written by both director and star, Pearl is like a Technicolor nightmare that pays homage to Hollywood’s golden age while considering its consequences in a silly, gory, and stylish prequel.

• Guillermo del Toro’s Pinocchio (Guillermo del Toro/Mark Gustafson): I’ve never been a fan of this tale of the little wooden boy, but del Toro’s masterful stop-motion adaptation of the classic fantasy story ignited my love for it for the first time. With a wonderful cast, magical animation, and a larger-than-life heart, this Pinocchio is brimming with emotional warmth.

• Triangle of Sadness (Ruben Östlund): While it may not contribute many new things to the conversation on class, Triangle of Sadness is a subversive and often hilarious conversation piece that is shot and edited with a distinct sense of anxiety. As the scale of the film grows with each consecutive act, the comical set of characters are met with playful cruelty and surprising empathy that culminates in one of my favorite final shots of the year.

• Cha Cha Real Smooth (Cooper Raiff): The indie wunderkind Cooper Raiff returns with more confidence in his second feature, a funny, simple, and saccharine look at feeling lost in your mid-twenties. Cha Cha Real Smooth is an amply moving film that speaks to Raiff’s ingenuity and ability to find sweet relationships in the most frustrating times.

• Bones and All (Luca Guadagnino): The most romantic film of the year also happens to be the most gruesome. From Luca Guadagnino, the connection between the transgressive images on screen and the internally experienced empathy and longing is only natural. Led by a quietly powerful performance by Taylor Russell, Bones and All is as sentimental as it is shocking.

• Girl Picture (Alli Haapasalo): One of my biggest surprises from this year’s Sundance Film Festival, Girl Picture, also known under its Finnish title Tytöt Tytöt Tytöt, is a coming-of-age film that brings to life three lush characters and their dreamy but realistic world. Bolstered by strong performances, Girl Picture is relatable and heartbreaking; most of all, it’s a pleasantly low-stakes, loving portrait of the inner lives of teen girls.